This study describes the first large-scale serosurvey on West Nile virus (WNV) conducted in the equine population in Pakistan. Sera were collected from 449 equids from two provinces of Pakistan during 2012–2013. Equine serum samples were screened using a commercial ELISA kit detecting antibodies against WNV and related flaviviruses. ELISA-positive samples were further investigated using virus-specific microneutralization tests (MNTs) to identify infections with Japanese encephalitis virus (JEV), WNV and tick-borne encephalitis virus (TBEV). Anti-WNV antibodies were detected in 292 samples by ELISA (seroprevalence 65·0%) and WNV infections were confirmed in 249 animals by MNT. However, there was no animal found infected by JEV or TBEV. The detection of WNV-seropositive equines in Pakistan strongly suggests a widespread circulation of WNV in Pakistan.

Flaviviruses represent a group of arthropod-borne viruses with a considerable public health impact, causing large outbreaks of human dengue fever, Japanese encephalitis virus (JEV) or West Nile virus (WNV) neuroinvasive cases in different parts of the world. Both WNV and JEV are positive sense, single-stranded RNA viruses (family Flaviviridae) and are maintained in nature in an enzootic transmission cycle between birds and mosquitoes (also pigs in the case of JEV) [1–5]. One of the most prevalent viral encephalitides in Asia is caused by JEV. It affects over 50 000 people and results in 15 000 deaths annually [1]. On the other hand, WNV has been blamed for recent viral encephalitis outbreaks in humans and horses in the Americas, Europe, Africa, Australia and the Middle East [2, 3], whereas WNV was considered a minor pathogen for humans before the mid-1990s, until the Algerian outbreak in 1994 and the Romanian outbreak in 1996 [4]. Now, WNV is widely distributed and considered endemic in Europe, Western Asia, Australia, Middle East, Africa and the Americas [5], while JEV is reported in South-East Asia and Australia [1]. Occurrence of WNV and JEV has also been reported in countries neighbouring Pakistan (India, China, Iran) [6–8]. From 1968 to 1994, a few clinical, serological and epidemiological studies indicated the presence of WNV and JEV in Pakistan [9–13]. Data are totally non-existent regarding the prevalence of WNV and JEV for the subsequent years.

The purpose of this study is to determine the status of WNV and JEV in the resident equine population from selected districts of two provinces [Punjab (PUNJ) and Khyber Pakhtunkhwa (KPK)] of Pakistan where migratory birds arrive each year from Siberia, Europe and Central Asia [14].

A total of 449 equine (248 horses, 201 donkeys) sera were collected from the provinces of KPK (n = 357) and PUNJ (n = 92) in Pakistan during 2012–2013 and screened using a commercial ELISA (ID Screen West Nile Competition ELISA kit; ID.vet, France) detecting antibodies against WNV and related flaviviruses. Two districts of KPK and three districts of PUNJ were targeted for sampling (Fig. 1). These districts were chosen due to the presence of migratory birds, the abundance of the equine population, presence of wetlands and the presence of veterinary clinics. Of 449 samples, 271 were females (156 horses, 115 donkeys) and 178 were males (92 horses, 86 donkeys). The average age of animals was 9·8 ± 3·4 years (range 3–20 years). All sampling sites (prefectures) are shown in the map (Fig. 1). All the study animals were draught horses or donkeys and were free from clinical symptoms associated with flavivirus infection. None of study animals had ever been vaccinated against any flavivirus. A further investigation on ELISA-positive samples was conducted using virus-specific microneutralization tests (MNTs) in order to differentiate past infections with two flaviviruses (WNV and JEV) known to be present in Pakistan and with another flavivirus (tick-borne encephalitis virus; TBEV) highly prevalent in horses in Eastern Europe [15], to support the specificity of WNV-specific antibodies. WNV neutralizing antibody titres were determined by performing MNT on Vero cells in 96-well cell culture plates, following an existing protocol [15]. ELISA- and MNT-positive samples were analysed statistically for association of age, sex and location by using the χ 2 test. A P value < 0·05 was considered significant for all analyses. Univariable analysis was performed and odds ratios along with 95% confidence intervals (CIs) were calculated to determine the association between prevalence and different variables. SPSS v. 17 software (SPSS IBM, USA) was used for statistical analysis. 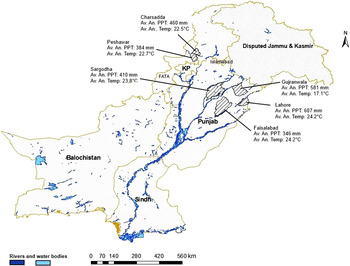 Fig. 1. Map showing the locations of sampling sites. The average annual precipitation (Av. An. PPT) and average annual temperature (Av. An. Temp) of districts are given.

A total of 292 (65·0%, 95% CI 60·4–69·4) sera tested positive (including five doubtful samples) for antibodies against WNV and related viruses by ELISA. Previously, WNV and JEV had been reported from Pakistan and it is well known that WNV ELISA shows cross-reactivity with other related flaviviruses necessitating the use of MNT for the identification of circulating flaviviruses. Therefore, ELISA-positive samples were further analysed by MNT to identify past infections with three equine flaviviruses (WNV, JEV, TBEV). MNT has a high degree of specificity for target flaviviruses but cross-neutralization within the same serocomplex is frequently observed. Due to this cross-neutralization, the comparison of the endpoint titres for JEV, WNV and TBEV should be performed, which leads to flavivirus identification by considering the virus with the highest neutralization capacity and at least a fourfold difference in titres. With this rule, 249 (55·4% of total samples) were found to be WNV positive by MNT (Supplementary Table S1). Moreover, eight samples were negative and corresponded to samples with low levels of flavivirus antibodies (low positives by ELISA), 10 samples were no longer available for MNT analysis, while for the remaining 25 samples MNTs were inconclusive. Of these 25 sera, 22 samples were positive for both JEV and WNV, with generally higher WNV neutralizing antibody titres than JEV titres (19 samples), the remaining three samples were positive for both WNV and TBEV (with similar titres for both viruses) Overall, no TBEV or JEV infections could be observed in Pakistani equines (Supplementary Table S1).

Birds are the main natural reservoirs for WNV infection, amplifying the virus. Hundreds of avian species (both wild and domesticated) are susceptible to WNV infection, but mostly with subclinical infection [16]. Migratory birds have been blamed for spreading WNV infection during their migration as anti-WNV antibodies are usually found less frequently in resident birds than migratory birds, suggesting that they can act as reservoirs of WNV and carry the virus over long distances, while resident wild birds can act as amplifiers of local WNV strains [17].

The other important factors that impact the shifting distribution of WNV include bird trade, mosquito transportation by shipping, or airplanes and the movement of people [18]. At present, WNV infection has been recorded in more than 20 countries in Europe and currently, the virus is endemic in Europe, Asia, Australia, the Middle East, Africa and America [5]. More than 75 mosquito species have been found to be infected with WNV worldwide. In Pakistani PUNJ more than 30 species of mosquito have been trapped, with the most prevalent being Culex tritaeniorhynchus and C. quinquefasciatus. Other potential WNV vectors previously identified in Pakistani PUNJ include: Mansomia uniformis and C. univittatus [12]. Local strains of C. tritaeniorhynchus are highly susceptible to WNV infection, but their feeding preferences do not promote WNV maintenance since they mainly feed on bovids [13]. Of the abundant mosquitoes in Pakistan, only C. quinquefasciatus is opportunist and feeds on humans as well as on birds [12]. Data regarding mosquito species from PUNJ and other Pakistani provinces are decades old and in need of updating.

In this study, areas with important equine populations, along with the presence of wetlands (rivers, lakes, etc.) and presence of migratory birds were selected to gauge the status of WNV infection in these areas. The present study highlighted the high prevalence of WNV in resident equines from the selected areas of Pakistan.

Apart from birds, humans and horses are occasionally infected by WNV and sporadic disease outbreaks can occur that may result in fatalities. Horses and other equine species are incidental hosts that are susceptible to WNV and JEV infection. Epidemiological studies have documented that WNV risk increases during peak mosquito activity seasons (between August and October) in temperate zones of the northern hemisphere, whereas in subtropical regions, the disease outbreak pattern is unpredictable and cases can appear all year round [18]. Up to now, only a solitary report is available on the occurrence of WNV infections in animals, humans and birds from two localities of Pakistani PUNJ with prevalences of 36·0%, 26·0% and 32·8–38·5%, respectively, in domesticated animals, wild birds and humans [11]. Moreover, few reports are available from Sindh province of Pakistan for JEV prevalence [9]. The studies that are available are decades old and represent a very limited area.

To best of our knowledge, this is first large-scale and recent study on the prevalence of flaviviruses belonging to the JEV serocomplex (WNV, JEV) or to the tick-borne encephalitis group (TBEV) in Pakistani equids. The present study highlights the high and recent circulation of WNV in Pakistan. Moreover, presence of anti-WNV antibodies in younger horses (⩾3 years) also indicates the recent circulation of WNV in areas under study. As horses may serve as sentinel hosts for monitoring the spread of WNV, the current higher prevalence of WNV in horses necessitates the development of human-, bird- and mosquito-based surveillance of WNV, and identification of circulating WNV strains of vectors and vertebrate hosts involved in WNV transmission in the study area. These results further illustrate the necessity of a coordinated strategy plan combining surveillance of wild migratory birds and sentinel units for in order to assess the impact of migratory birds in the spread of WNV in Pakistan. The information obtained should be used to direct or optimize actions intended to prevent virus transmission, such as vector monitoring and control, implementation of information campaigns to improve personal protection and deployment of screening tests on blood and tissues in order that further epidemics of flaviviruses can be avoided in the region.