The effectiveness of vaccination to prevent the papillomavirus infection: a systematic review and meta-analysis

Cervarix® and Gardasil® were the first vaccines for the prevention of the cervical cancer. Cervarix® targets types 16 and 18 HPV, which are responsible for 70% of all cervical cancer [Reference Wang and Palefsky3], while Gardasil®, on the other hand, adds also activity against types 6 and 11 HPV, which cause 90% of anogenital warts [Reference Kessels4]. Additionally to those included in the qHPV, the 9vHPV vaccine contains type 31, 33, 45, 52 and 58 antigens [Reference Lopalco5].

These vaccines are well-tolerated, safe and only with minor adverse effects. They also protect against pre-cancerous lesions caused by subtypes 16 and 18 in a naive population, adding a systemic immune response at 5 years post-vaccination [Reference Pomfret, Gagnon and Gilchrist6–Reference Paavonen8].

The primary care service in United States recommended HPV vaccine for females aged 9–26, through the Vaccines for Children program since 2006 [Reference Gattoc, Nair and Ault9]. Additionally, the immunisation for adolescents aged 11–12 years and for adolescent women (aged 13–26 years) before sexually active was recommended by The US Center for Disease Control and it is accepted in many developed countries [Reference Bonanni7,Reference Markowitz10].

According to the health care system's organisation, the coverage rate and the programmes differ. Some of the vaccination programmes are offered through schools (e.g. Australia, UK) whereas others are provided in private clinics, or public primary care (e.g. the United States) [Reference Skinner and Cooper Robbins11,Reference Dorleans12].

Different studies (phases II and III) have been conducted, and a few reviews have tried to pooled the effects [Reference Szarewski13], however, none of them emphasise the changes in the prevalence/incidence of HPV serotypes in the populations. Besides, previous reports have not assessed the impact of vaccination in different ages and time since sexual beginning, nor multisite and cross-protection against HPV types. Also, there is conflict about the protection against re-infection among individuals known to be infected and who subsequently clear their infections [Reference Arbyn14].

The objective was to determine the effectiveness and harms of vaccination in patients with any sexual history to prevent the prevalence of papillomavirus infection.

We performed this review according to the recommendations of the Cochrane Collaboration [Reference Higgins and Green15] and following the PRISMA Statement [Reference Moher16]. The PROSPERO registration number is CRD42017074007.

We included only clinical trials; both gender patients from any population at any age and any sexual history. The interventions were: vaccine against HPV: HPV16 and HPV18 (bivalent vaccine), or HPV6, HPV11, HPV16 and HPV18 (tetravalent vaccine) and HPV6, HPV11, HPV16, HPV18, HPV31, HPV33, HPV45, HPV52 and HPV58 (nanovalent) genotypes. The vaccination had to be intramuscular injection over a period of 6 months according to the standard scheme. We did not include pregnant patients

For infection and long-term adverse effect outcomes, studies had at least 1-year follow-up and for short-term outcome studies were allowed to be less than a 1-year follow-up.

A literature search was conducted as recommended by Cochrane. We used medical subject headings (MeSh), Emtree language, Decs and text words related. We searched MEDLINE (OVID), EMBASE, LILACS and the Cochrane Central Register of Controlled Trials (CENTRAL). The search was performed from 2000 to to date.

To ensure literature saturation, we scanned references from relevant articles identified through the search; conferences (HPV2015 and HPV2017) related to HPV and vaccines and thesis databases (e.g. Theseo). Grey literature was searched in open grey and Google scholar. We looked for clinical trials in the process in clinicaltrials.gov, the registry created by the World Health Organization and the New Zealand registry for Clinical trials, among others. We contacted authors by e-mail in case of missing information. There were no setting or language restrictions.

Two researchers reviewed each reference by title and abstract and full-texts, applied pre-specified inclusion and exclusion criteria. Disagreements were resolved by consensus and where the dispute could not be solved, a third reviewer dissolved conflict.

We assessed the risk of bias for each study with the Cochrane Collaboration tool, which covers: sequence generation, allocation concealment, blinding, incomplete outcome data, selective reporting and other biases. Two independent researchers will judge about the possible risk of bias from extracted information, rated as ‘high risk,’ ‘low risk’ or ‘unclear risk.’ We described a graphic representation of potential bias using RevMan 5.3 [Reference Higgins, Altman and Gotzshe17].

We performed the statistical analysis in R [18]. For categorical outcomes, we reported information in risk differences (RD) with 95% confidence intervals (CIs) according to the type of variables, and we pooled the data with a random effect meta-analysis according to the heterogeneity expected. The results were reported in forest plots. Heterogeneity was evaluated using the I 2 test [Reference Higgins and Green15]. For the interpretation, it was determined that the values of less than 50% would be for low heterogeneity and more than 50% would be for the high level of heterogeneity.

We did not perform publication bias due to the number of included studies in each meta-analysis.

We performed sensitivity analysis extracting weighted studies, analysing the length of follow-up and running the estimated effect to find differences.

We tried to perform subgroup analysis by co-infection, sample site, gender, age and continent however due to the scarcity of data, we were not able to do it.

All studies included data from females. However, there were four studies (Reisinger 2007, Moreira Jr 2011, Giuliano 2011 and Lehtinen 2016) described information for males.

The rest of the information regarding the included studies is described in Table 1.

a Studies with other publications.

Studies with follow-up less than 1 year, were included for adverse effects.

No selective reporting was identified during grading in these studies. Nonetheless, all studies were industry-funded, and this leads to unclear classification (Fig. 2). 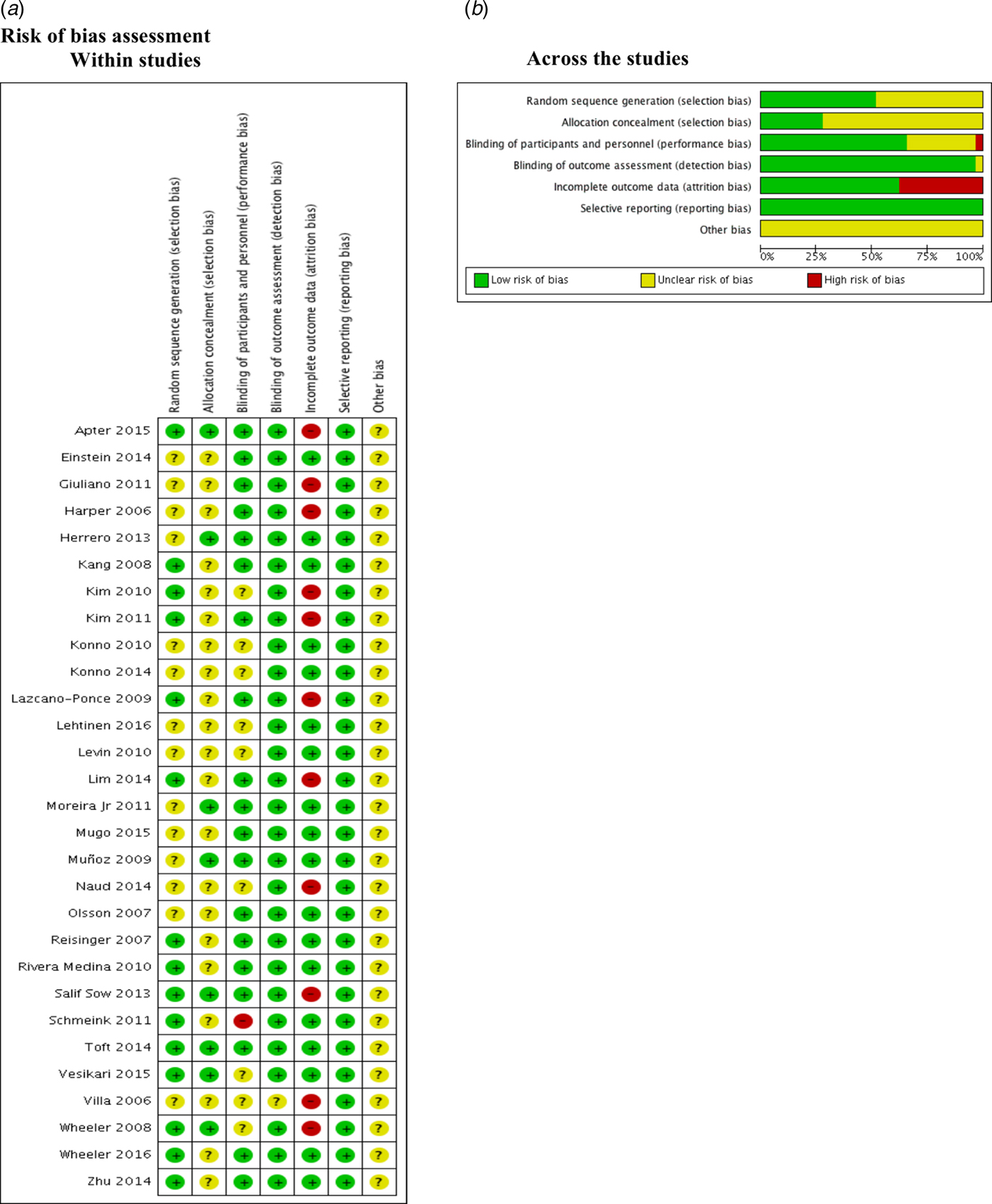 Description of effect for comparisons and outcomes

Bivalent vs. other vaccine/placebo: total

Other results for any genotype, little adverse effects and autoimmune disease are shown in Table 2.

Bivalent vs. other vaccine/placebo: 1 year

Other results for little adverse effects and autoimmune disease are shown in Table 2.

Bivalent vs. other vaccine/placebo: 4 year

Other results for HPV16/18 and small adverse effects are shown in Table 2.

Tetravalent vs. other vaccine/placebo: total

Tetravalent vs. other vaccine/placebo: 4 years

Summary of the main results

In summary, evidence suggested that the bivalent HPV vaccine offers protection against HPV16, HPV18 and HPV16/18 genotypes without increasing adverse effects. It is consistent with 4 years for HPV16 and HPV18 genotypes. On the other side, tetravalent HPV vaccine, offered protection against HPV6, HPV11, HPV16 and HPV18 without increasing adverse effects and this was consistent at 4 years.

Comparison with other reviews or other studies

Detecting a specific capsid antibody in serum suggests an HPV infection. Although more than 50% of infected subjects will have a serological conversion, and thus detection of HPV antibodies. This has been used to analyse the natural history and the cumulative infection in different groups [Reference Pagliusi55].

Assays measuring functional neutralising ability might reflect protective immunity, based on animal experiments. Nonetheless, epitopes for HPV are not completely characterised in human responses therefore, they will be heterogeneous [Reference Pagliusi55].

Neutralisation assays are independent of vaccine material, therefore they provide an unbiased measure of HPV serological response, induced by the vaccine. The direct ELISA, assesses the immunoglobulin G (IgG) response (both antibodies), that might be used as a technique to manage the large volume of samples [Reference Dessy56].

On the other hand, the immune response to HPV infection (mainly IgG) is generally weak and heterogeneous among women. Around 50% of the individuals serologically convert to the L1 protein of HPV6, 16 and 18, within 18 months [Reference Carter57]. Conversely, it signifies that more than 40% of women do not seroconvert over time, therefore, the HPV L1 capsid-specific antibody is not an important diagnostic test for this infection. Other HPV antigens (E1, E2, E6 and L2) do not resemble any responses in patients with HPV infection [Reference Mariani and Venuti58]. But, HPV vaccines are based on recombinant virus-like particles (VLPs). These vaccines are highly immunogenic; induce very high titres of neutralising antibodies and represent durable responses. This might be due to VLPs since its ordered structure which permits the presentation of epitopes to B-cells for potent activation [Reference Wang and Roden59].

The challenge would be demonstrating that L1 gene expressed via a recombinant virus and the L1 protein produced largely and self-assembled into the VLP or the empty capsid almost identical to the native virion. These VLPs generate neutralising antibodies in animal models and these were protected against a virus challenge [Reference Stanley60].

Strengths and limitations of the review

The advantages of this systematic review include: following standardised methods, according to Cochrane collaboration and PRISMA guidelines and the wide-ranging search to identify data about both clinical and immunological outcomes.

Although we had a lot of studies, most of our limitations were regarding available data for the vaccines across the studies. Additionally, we found differences in study design and methods to assess specific efficacy endpoints and immune responses [Reference Einstein61].

On the other hand, we found high statistical heterogeneity and different issues regarding the risk of bias, mainly for not having enough information to evaluate the effect. However, some studies had a high risk of bias regarding blinding and attrition bias. All studies were industry-funded; therefore, this might lead to an unclear risk of bias.

Hence, this is the first step to evaluate the efficacy of the vaccines against HPV. According to these findings, the vaccines reduce the risk of having the genotype that they were designed for. However, we need to go further, assessing the efficacy to reduce the risk of cancer. Although they were statistically valid, the risk reduction was not high (1–10%) compared with the general chance of not receiving intervention. Therefore, it is essential to consider this when decision-making in public health.

We suggest describing better and establishing measures to prevent attrition bias in RCTs regarding this critical issue.

This systematic review and meta-analysis accomplishes all the ethics requirements according to Helsinki declaration and all international statements.

The effectiveness of vaccination to prevent the papillomavirus infection: a systematic review and meta-analysis
×

The effectiveness of vaccination to prevent the papillomavirus infection: a systematic review and meta-analysis
×

The effectiveness of vaccination to prevent the papillomavirus infection: a systematic review and meta-analysis
×
×