Did AIDS mortality decrease the number of lifetime sexual partners in Kenya: an ecological analysis?

It is important to correctly identify the factors responsible for the decline of sexually transmitted infection (STI) rates in much of Southern and Eastern Africa. A prevalent view is that behaviour change in the form of adopting various safer sex practices in combination with better treatment of STIs was responsible [Reference Johnson1]. Studies from men who have sex with men (MSM) in the USA have, however, provided evidence that AIDS mortality played a significant role [Reference Boily2, Reference Chesson, Dee and Aral3].

The effect of AIDS mortality could have been mediated via three pathways: (i) individuals most at risk of HIV acquisition and transmission were removed from the population, (ii) people living in areas with higher AIDS mortality may have been more likely to change sexual behaviour [Reference Chesson, Dee and Aral3], and (iii) depletion of the pool of high-risk persons might have made it difficult for the remaining high-risk persons to find sufficient partners with whom to engage in risky sex [Reference Boily2].

Since peak AIDS mortality rates in some Southern and Eastern African countries were higher than that those observed in MSM in the USA, it is plausible that AIDS mortality may have played a significant role in reducing HIV/STI transmission in these countries [Reference Chesson, Dee and Aral3–Reference Kenyon, Osbak and Chico5]. The countries with generalized HIV epidemics that have experienced large declines in STI incidence include Botswana, Kenya, Lesotho, Malawi, Mozambique, South Africa, Tanzania, Uganda, Zambia and Zimbabwe [Reference Johnson1, Reference Kenyon, Osbak and Chico5].

The effect of AIDS mortality on the structure of sexual networks and, hence, STI transmission is difficult to directly assess outside of longitudinal cohort studies that regularly collect sexual behaviour data and HIV serostatus. One indirect way to assess this effect is to see if high AIDS mortality in a population is followed by a decline in the lifetime number of sexual partners in that population. The rationale is that persons with the most sexual partners would be more likely to become HIV infected and, therefore, die, thus lowering the mean and median lifetime number of partners in that population. The only datasets we could find that allowed us to test this hypothesis were the 1993 and 2008 Demographic and Health Surveys (DHS) from Kenya. Both surveys asked men and women about their lifetime number of sexual partners and both used a similar two-stage stratified sampling approach that, once weighted, provided prevalence estimates that were nationally representative (excluding the North-eastern province, which was not sampled in the 1993 survey). The 1993 survey included men aged 20–54 years and the 2008 survey men aged 15–54 years. Because of these differences in sampling, we restricted our comparisons to men aged 20–54 years living outside the North-eastern province (n = 2336 in 1993, n = 2541 in 2008). Women aged 15–49 years reported a median of two lifetime sexual partners in 1993 and one lifetime sexual partner in 2008 and a slight decline in the mean number of sexual partners from 2·2 in 1993 to 1·9 in 2008. However, DHS surveys have been shown to be particularly susceptible to underreporting the number of sexual partners by women [Reference Beauclair6, Reference Morris7]. As a result, only the results for men are presented.

The estimated number of deaths per year due to AIDS in Kenya increased from < 5000 in 1990 to peak at 150 000 in 2003 and declined to 85 000 in 2009 [8, 9]. The 1993 and 2008 surveys therefore provided us with estimates of lifetime sexual partners in the pre- and post-peak AIDS eras, respectively. Since there were 15 years between the surveys, the men aged 20–39 years in the 1993 survey would have become 35–54 years by 2008. We compared the median and interquartile range (IQR) of the number of lifetime sexual partners, first for men aged 20–54 years in 1993 with those in 2008 and, second, for men aged 20–39 years in 1993 with those aged 35–54 years in 2008. Wilcoxon rank-sum test was used for this analysis. The analyses include all men in these age groups regardless of whether they reported having had sex before. The analyses were performed using R v. 3.1.0 (R Foundation, Austria). All analyses were adjusted to account for the complex sampling strategies of the surveys. 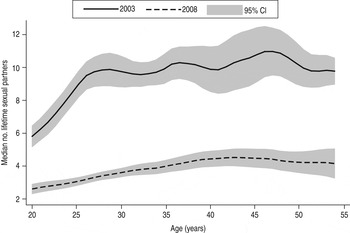 Fig. 1. The median number of lifetime sexual partners reported by men in 1993 and 2008 (from Kenya Demographic and Health Surveys 1998 and 2003). The shaded grey area represents the 95% confidence interval (CI).

How can we explain the decline in the reported number of lifetime sexual partners in men aged 20–39 years in 1993 with this same age group of men 15 years later? This decline could be explained by differences in the questionnaire design, differences in sampling, misreporting bias in 1993/2008 or mortality due to AIDS or other causes. The first explanation can be discarded, as both the lifetime sexual partners question and the preceding framing questions were almost identical in both surveys. The second explanation is less likely, given that our analysis accounted for the slight differences in survey design. It is possible that in the 15-year period between the two samples, reporting a greater number of lifetime partners became less socially acceptable and thus men became more likely to deflate (or less likely to inflate) their reported number of partners. We are unable to discount this possibility, but it would not easily explain the greater decline in lifetime partners in ethnic groups most affected by HIV. HIV prevalence in Kenya's ethnic groups varies between 0·8% and 20·8% and the drop in lifetime sexual partners between 1993 and 2008 for both men and women was greatest in the two ethnic groups with the highest HIV prevalences (Luo and Luhya, see [Reference Kenyon10]). We cannot, however, exclude the possibility that the ethnic groups most affected by HIV were most likely (due to a social desirability bias) to underreport lifetime partners. Despite these reservations, in our estimation AIDS mortality provides a better explanation for the decline in reported lifetime partners. It also fits with the timing of the HIV epidemic and is commensurate with the evidence of the effect of AIDS mortality on HIV/STI incidence in MSM in USA. In addition, it is congruent with modelling and ecological evidence that suggests that AIDS mortality played a significant role in the decline of the prevalence of syphilis, male genital ulcers and male urethral discharge in Southern and Eastern Africa [Reference Johnson1, Reference Kenyon, Osbak and Chico5, Reference Kenyon11]. Furthermore, a study from an open cohort in Masaka, Uganda found that 25% of both men and women reported fewer lifetime partners in a later survey (2007) compared to the earlier survey (2000) [Reference Todd12]. The authors of this paper did not quantify the decline in lifetime partners but speculated that this could be due to misreporting or AIDS mortality. Unfortunately, we could not test the relationship between lifetime sexual partners and AIDS mortality elsewhere as we could not find another country that collected DHS data on lifetime sexual partners in both the pre- and post-AIDS periods. Investigating this relationship in demographic and surveillance sites that have collected information on lifetime partners would constitute useful future research. It should be emphasized that we do not have any direct evidence to substantiate the differential AIDS mortality explanation. Furthermore, the magnitude of the decline in sexual partners may be too large to be explained solely by AIDS mortality. Other factors, such as misreporting bias, may have played a role.

The parallels with the HIV epidemic in MSM in the West may be relevant. AIDS mortality led to declines in HIV/STI incidence both directly through the effect of removing more central players from sexual transmission networks and indirectly through behaviour change [Reference Boily2, Reference Chesson, Dee and Aral3]. Antiretroviral therapy (ART) has, to some extent, negated the effect of both these mechanisms and thereby likely played a role in the re-emergence of HIV/STIs in this group [Reference Chesson and Gift13]. If AIDS mortality played a significant role in the decline of AIDS and other STIs in Southern and Eastern Africa then this has important implications. One is that behaviour change may not have been as extensive as is commonly believed. The widespread availability of ART could then lead to a rebound in HIV/STI incidence. The recent increases in reported multiple partnering in Uganda and South Africa and the increase in HIV incidence in Uganda suggest that this process may have already begun [Reference Shisana and Onoya14, 15]. Campaigns to effect more profound behaviour change may be warranted.

No funding was received for this study.