CURB-65 may serve as a useful prognostic marker in COVID-19 patients within Wuhan, China: a retrospective cohort study

Creative Commons
This is an Open Access article, distributed under the terms of the Creative Commons Attribution-NonCommercial-ShareAlike licence (http://creativecommons.org/licenses/by-nc-sa/4.0/), which permits non-commercial re-use, distribution, and reproduction in any medium, provided the same Creative Commons licence is included and the original work is properly cited. The written permission of Cambridge University Press must be obtained for commercial re-use.
Copyright
Copyright © The Author(s), 2020. Published by Cambridge University Press

In December 2019, an acute respiratory disease caused by severe acute respiratory syndrome coronavirus SARS-CoV-2 [Reference Phelan, Katz and Gostin1], and officially named as Corona Virus Disease 2019 (COVID-19) occurred in Wuhan, which quickly caused a pandemic in the world [Reference Ahmad, Mueller and Tsamakis2]. By 23 April 2020, more than 2 million confirmed cases and 180 000 dead cases have been documented worldwide. Unfortunately, a simplified prognostic risk score, which could be easily used in primary care or general practice settings, has not been developed for this unprecedented disease [Reference Pan3].

In the assessment and management of pneumonia, disease severity assessment is crucial in guiding therapeutic options such as the need for hospital admission or intensive care (ICU) stay. Due to the high burden of COVID-19, we need a simple one to quickly triage severe patients. The pneumonia severity index (PSI) provides a means for stratifying groups of patients according to their risk of mortality and features [Reference Fine4]. Although it is complicated to use, requiring the computation of a score based on 20 variables, and hence may not be practical for routine application in busy hospital emergency departments or primary care settings. In addition, it is best validated for assessing patients with a low mortality risk who may be suitable for home management rather than those with severe pneumonia at the time of hospital admission [Reference Fine4].

It has been reported that a higher sequential organ failure assessment (SOFA) score was associated with increased odds of death in hospitalised COVID-19 patients [Reference Zhou5]. First developed in 1994, the SOFA score has been proved useful in predicting outcomes for patients in ICU. SOFA score measures organ dysfunction in six different systems (needs arterial blood gas result), using a 5-point scale, which also makes it difficult to use to triage patients.

It has recently been reported that older COVID-19 patients (>65 years) with comorbidities were at increased risk of death [Reference Yang6], which enlightens us to test the prognostic value of CURB-65 score in COVID-19 patients. CURB-65 score is a widely used score system to guide the treatment of community-acquired pneumonia (CAP), which consists of five easily acquired parameters (confusion, blood urea nitrogen (BUN), respiratory rate, blood pressure and age) [Reference Singanayagam and Chalmers7]. CURB-65 score has been verified to effectively predict clinical outcomes in CAP caused by viral infection [Reference Zhou8]. Our study aimed to analyse the prognostic value of CURB-65 at admission in patients with COVID-19 and to identify the CURB-65 cut-off value for in-hospital death.

Two researchers independently reviewed the data collection forms, and a third researcher adjudicated any difference in interpretation between the two primary reviewers.

We first compared different characteristics between survivors and non-survivors. Continuous and categorical variables were reported as median (interquartile range (IQR)) and N (%). They were tested by Wilcoxon rank-sum test, χ2 test or Fisher's exact test where appropriate. Then univariate analysis for risk factors associated with death were conducted with logistic regressions and plotted by forest plots. We then applied the receiver operating characteristic (ROC) curve analysis to evaluate the performance of CURB-65 on death. An area under curve (AUC) over 0.8 was considered a good discrimination ability. To identify a better cut-off value for CURB-65 and death, diagnostic statistics (sensitivity, specificity and F1 score) were compared, and associated approaches for optimal threshold identification (Younden's index, minimum distance estimation and cross-over point for sensitivity-specificity curve) were applied. In addition, univariate Cox models for different CURB-65 cut-off values and death were conducted. The model with a smaller Akaike information criterion (AIC) was considered as a better model. A Kaplan–Meir curve was then plotted, with a log-rank test conducted for the comparison between the two groups divided by our identified cut-off value. Finally, a multi-variate Cox proportional-hazard model was used to evaluate the contribution of potential risk factors for death. To avoid overfitting in the model with a small sample size (number of deaths = 31), three variables were finally chosen for multivariate analysis based on the results of univariate analysis and clinical knowledge. In all Cox models, time was measured as the time since the admission day. A two-sided α of less than 0.05 was considered statistically significant. The statistical analyses were performed using SAS 9.4 (SAS Institute, Cary, NC, USA).

From 28 January 2020 to 29 February 2020, 113 adult patients were hospitalised, after excluding 35 patients that were still hospitalised or not confirmed by COVID-19 RNA detection, and four patients without available key information in their medical records, a total of 74 patients were included in this study. Among all 74 patients, 31 patients died and 43 patients survived (Fig. 1). 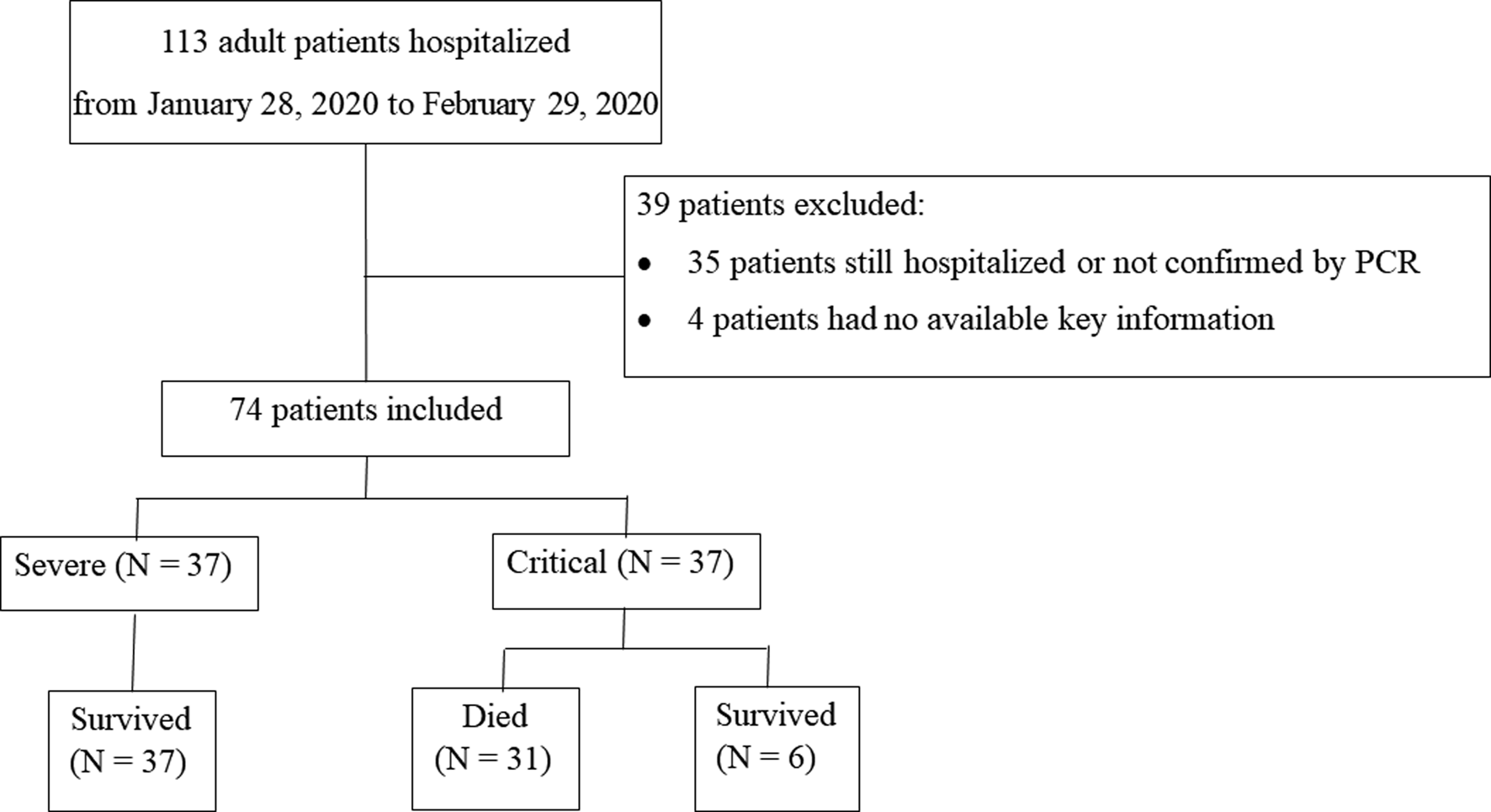 Baseline characteristics between survivors and non-survivors 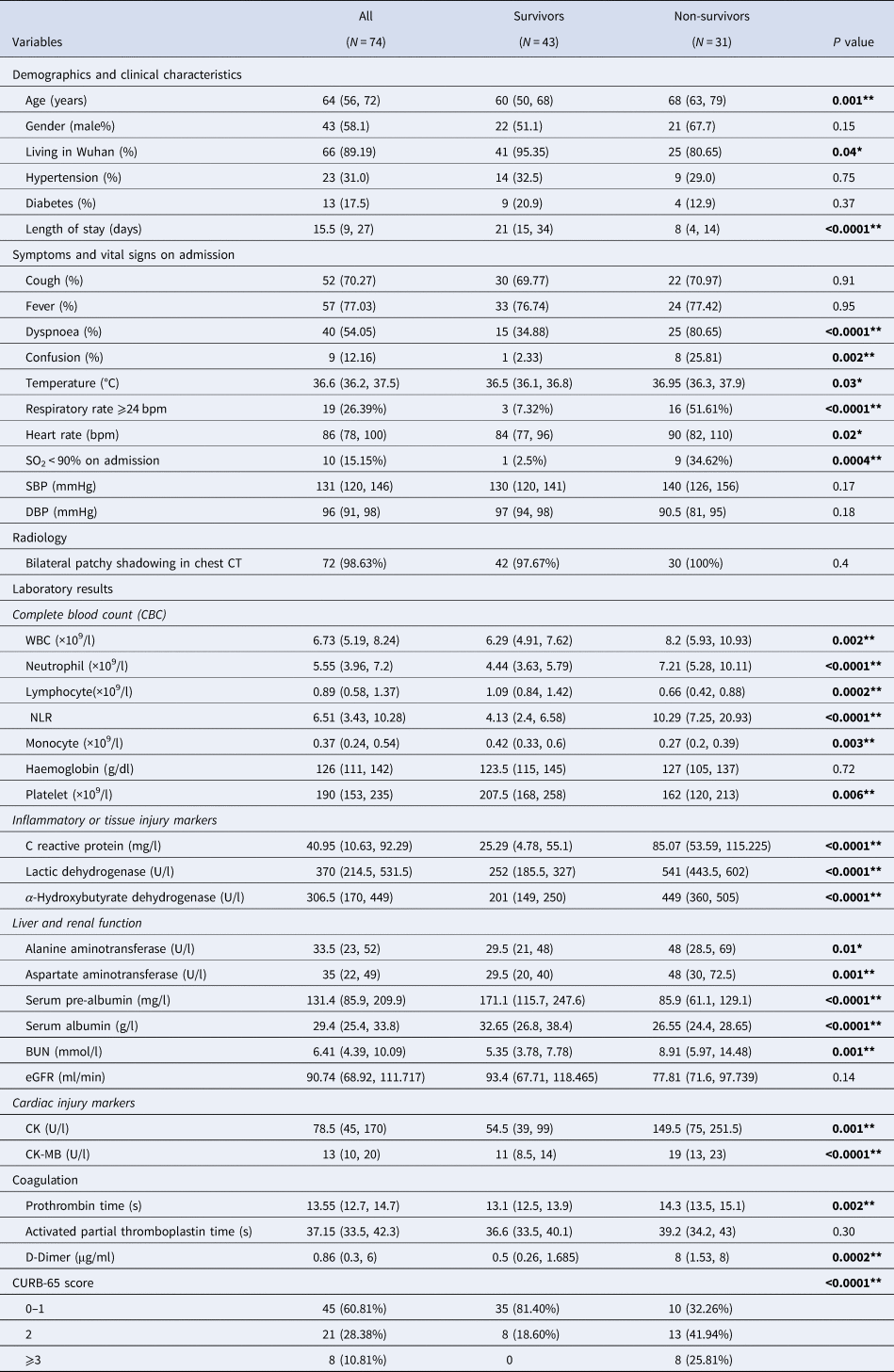 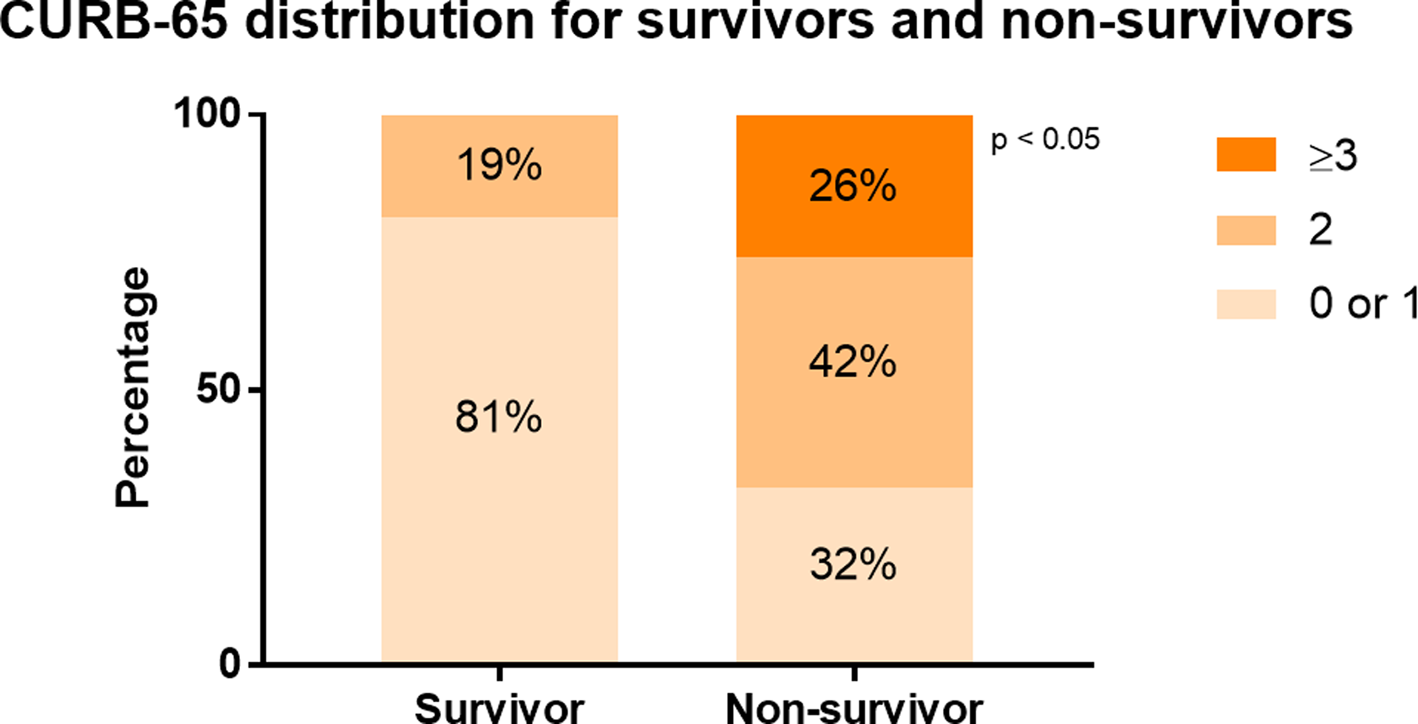 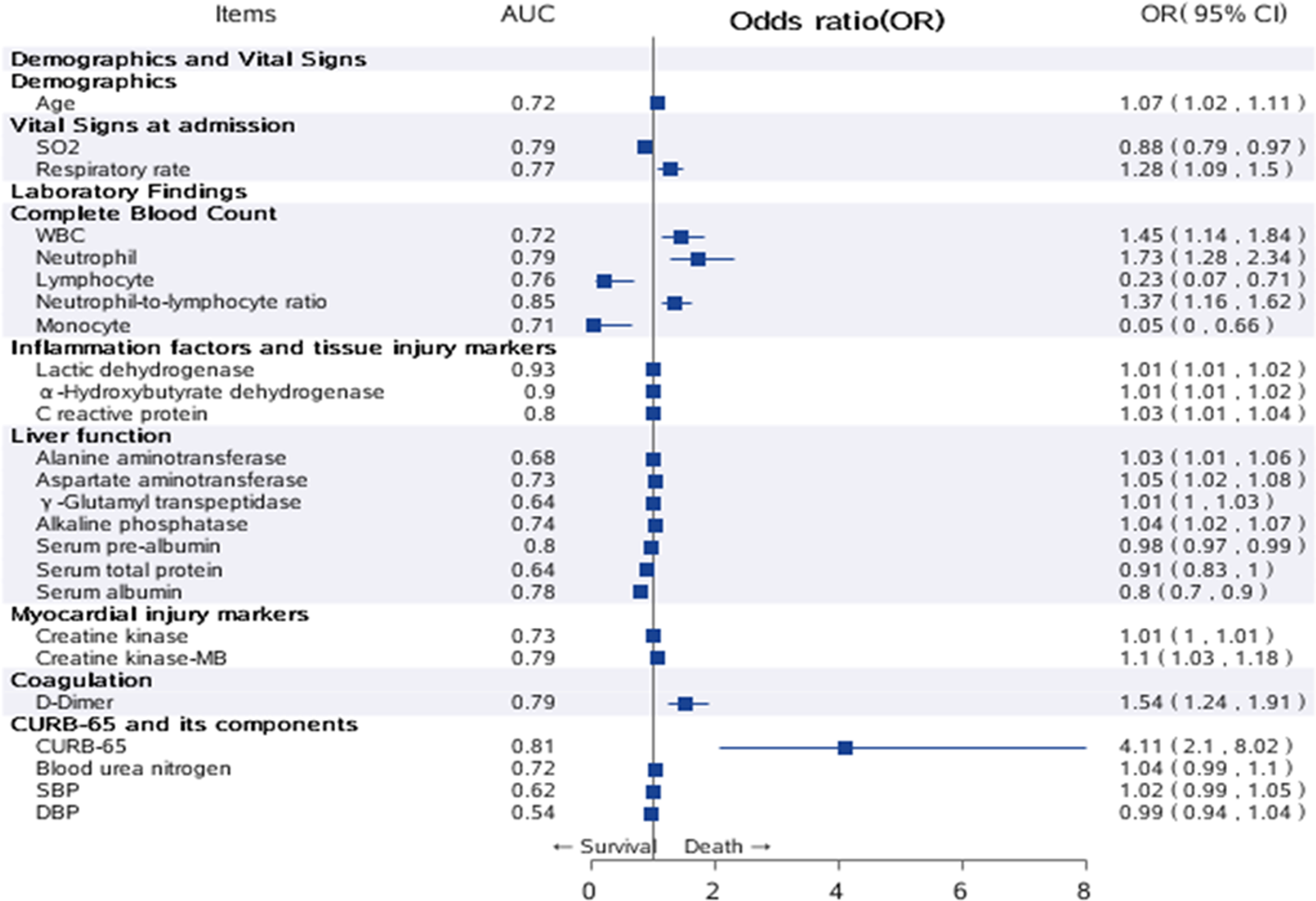 Identification of cut-off value for CURB-65

We further explored the potential cut-off value for CURB-65 in predicting in-hospital death. As shown in Supplementary Figure 3, all survivors had CURB-65 <3, while only 26% of non-survivors had CURB-65 ⩾3, which indicates 3 may not be a proper cut-off in predicting death. As shown in Supplementary Figure 4, Youden's index for the ROC curve of CURB-65 was 2, with a sensitivity of 68% and specificity of 81%, suggesting 2 seems a better cut-off value. When the CURB-65 cut-off value was set to 2, the highest F1 score (0.70) and lowest AIC (222) for univariate Cox models were observed (Supplementary Table 1). 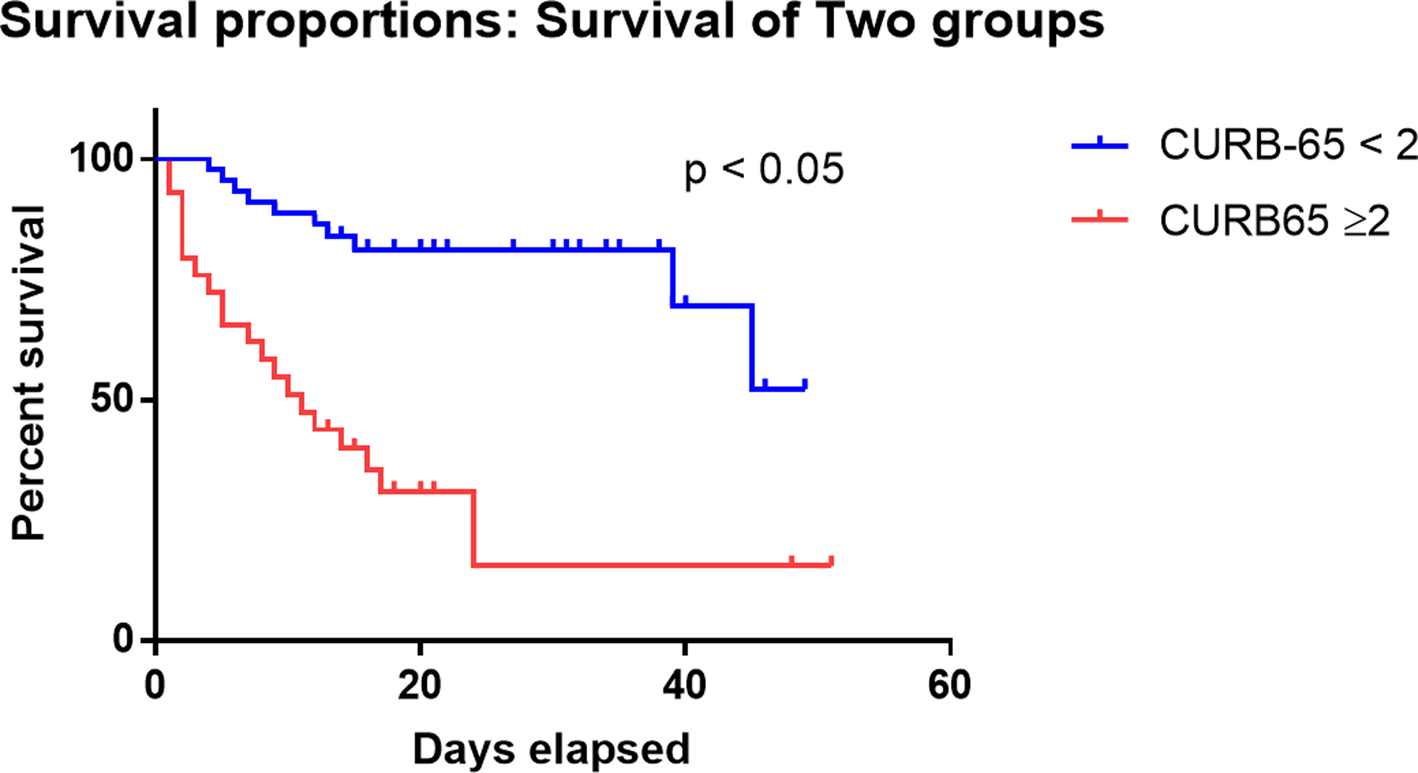 Fig. 4. Kaplan–Meier curve for death and CURB-65 categories. Survival analysis for patients categorised by the CURB-65 score. Patients with CURB-65 ⩾2 had significantly lower survival probability than those with CURB-65 <2 (P < 0.05).

This retrospective cohort study identified several risk factors for in-hospital death in adult patients in Wuhan who were hospitalised for COVID-19. In particular, higher serum LDH, lower serum albumin and higher CURB-65 score on admission were associated with higher hazards of in-hospital death. Previous reports showed that older age, D-dimer levels >1 μg/l and higher SOFA score on admission were associated with higher odds of in-hospital death. Our findings share similarities with previous reports in that older age is included in the CURB-65 score. In addition, our findings make useful supplementation to current knowledge by shedding light on the prognostic value of serum LDH and albumin.

Numerous scoring systems have been used to assess the severity of illness in patients with CAP (e.g. PSI [Reference Fine4, Reference Fine13] and CURB-65 [Reference Lim14]) or in ICU (e.g. APACHE-II and SOFA [Reference Hillas15]). However, they either require complicated input variables (e.g. APACHE-II) or require repeated measures (e.g. SOFA). In contrast, CURB-65, consisting of only five easily obtained parameters (mainly derived from vital signs), has been validated in different populations [Reference Lim14, Reference Capelastegui16, Reference Aujesky17] and regarded as a strong predictor for mortality in CAP patients [Reference Zhou8]. Celal Satici et al. also found an excellent discrimination ability of CURB-65 for prediction of 30-day mortality in hospitalised patients, although it was outperformed by the more complex score system PSI [Reference Satici18]. In our study, CURB-65 demonstrated a good performance (AUC 0.81) and had a relatively large effect size (OR 4.11, 95% CI 2.10–8.02) for in-hospital death in univariate analysis. Previous CAP guideline suggested that patients with CURB-65 score 0 and 1 should be treated as outpatients, those with CURB-65 score 2 should be hospitalised, while patients with CURB-65 score 3 or above should be assessed for ICU admission [Reference Wunderink and Waterer19]. Here we found the cut-off value of 2 had better performance on diagnostic statistics and univariate COX model to predict in-hospital death. This lower cut-off might also imply a faster progression of COVID-19 compared with other CAP, which may need earlier intervention.

Our study has some limitations. First, due to the retrospective study design, laboratory tests or vital signs were incomplete in some patients. Second, patients were sometimes transferred late in their illness to the included hospital, which may interfere with observation of the disease process. Third, by excluding patients still in hospital as of 29 February 2020, and thus relatively more severe disease at an earlier stage, the case fatality ratio in our study cannot reflect the true mortality of COVID-19. Last but not least, the interpretation of our findings might be limited by the sample size, which needs to be confirmed in large-scale multicentre research.

CURB-65 may serve as a useful prognostic marker in COVID-19 patients, which could be used to quickly triage severe patients in primary care or general practice settings. CURB-65 ⩾2 may serve as a cut-off value for the prediction of in-hospital death. Low serum albumin, elevated LDH levels and high CURB-65 score could help clinicians to identify at an early stage those patients with COVID-19 who have a poor prognosis.

We acknowledge all health-care workers involved in the diagnosis and treatment of patients in the Union Hospital, Tongji Medical College Huazhong University of Science and Technology. We thank Dr Yong Xue for suggestions on writing.

The funders had no role in study design, data collection and analysis, decision to publish or preparation of the manuscript.

All authors declare no competing interests.

This study received approval from the Research Ethics Committee of the Union Hospital, Tongji Medical College Huazhong University of Science and Technology, Wuhan, China (2020-0213). The Research Ethics Committee waived the requirement of informed consent before the study started because of the urgent need to collect clinical data. We analysed all the data anonymously.

CURB-65 may serve as a useful prognostic marker in COVID-19 patients within Wuhan, China: a retrospective cohort study
×

CURB-65 may serve as a useful prognostic marker in COVID-19 patients within Wuhan, China: a retrospective cohort study
×

CURB-65 may serve as a useful prognostic marker in COVID-19 patients within Wuhan, China: a retrospective cohort study
×
×