Fluoroquinolone use before tuberculosis (TB) diagnosis delays the time to diagnosis and treatment, and increases the risk of fluoroquinolone-resistant TB and death. Ascertainment of fluoroquinolone exposure could identify such high-risk patients. We compared four methods of ascertaining fluoroquinolone exposure in the 6 months prior to TB diagnosis in culture-confirmed TB patients in Tennessee from January 2007 to December 2009. The four methods included a simple questionnaire administered to all TB suspects by health department personnel (FQ-Form), an in-home interview conducted by research staff, outpatient and inpatient medical record review, and TennCare pharmacy database review. Of 177 TB patients included, 72 (41%) received fluoroquinolones during the 6 months before TB diagnosis. Fluoroquinolone exposure determined by review of inpatient and outpatient medical records was considered the gold standard for comparison. The FQ-Form had 61% [95% confidence interval (CI) 48–73] sensitivity and 93% (95% CI 85–98) specificity (agreement 79%, kappa = 0·56) while the in-home interview had 28% (95% CI 18–40) sensitivity and 99% (94–100%) specificity (agreement 68%, kappa = 0·29). A simple questionnaire administered by health department personnel identified fluoroquinolone exposure before TB diagnosis with moderate reliability.

Published studies reporting patient fluoroquinolone exposure data have used various methods, such as medical record review [9] and pharmacy databases linked to TB registries [2, 3, 10]. The validity of such sources of exposure data has not been determined.

In the current study we compared four methods of ascertaining fluoroquinolone exposure prior to diagnosis in TB patients in Tennessee.

The study population was identified by starting with all culture-confirmed TB patients in Tennessee during the study period who consented to the in-home interview and medical record review. Then for each pairwise comparison of ascertainment methods, patients with unknown or missing exposure were removed from the analyses. Data were analysed using contingency tables.

To assess the agreement between methods, we calculated the simple kappa coefficient. We interpreted the kappa values according to Landis & Koch [12]: values <0 are indicative of poor agreement, 0·01–0·20 slight agreement, 0·21–0·40 fair agreement, 0·41–0·60 moderate agreement, 0·61–0·80 substantial agreement, and 0·81–1·00 indicate almost perfect agreement. We also calculated positive and negative predictive values and likelihood ratios for the comparisons between the interview methods and the medical records.

A total of 493 culture-confirmed TB patients were reported to the Tennessee Department of Health during the study period. Of these, 177 (36%) consented to the in-home interview and signed a release of medical information form for medical record review. There were 128 (26%) patients who declined to participate, 23 (5%) who could not be reached, and 165 (33%) who did not meet eligibility criteria. The in-home interviews occurred a median of 70 days [interquartile range (IQR) 49–107] after TB diagnosis.

There were no statistically significant differences between patients who were enrolled and those not enrolled with regard to age, sex, race, ethnicity, birthplace, HIV status, prior TB, site of disease, and radiographic cavitary or miliary disease. The 177 enrolled participants were predominantly male (63%), not black (64%), not Hispanic or Latino (82%), born in the United States (77%), HIV negative (91%), and had pulmonary TB (89%).

Table 1. Demographic and clinical characteristics of the 177 study patients according to fluoroquinolone exposure 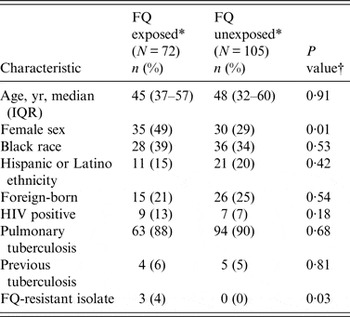 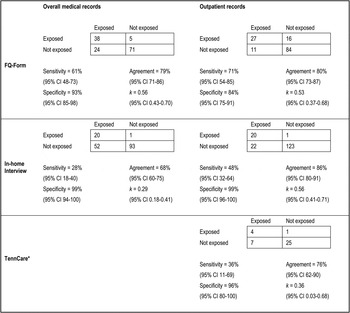 All of the comparisons of the FQ-Form, in-home interview, and TennCare to medical record exposures, whether overall or outpatient only, showed relatively high specificities, indicating that when fluoroquinolone use was reported by any of these sources, there was usually medical record confirmation of such use. The low sensitivity of the in-home interview likely reflects the limits of patient recall, particularly since some of the in-home interviews were completed months after the fluoroquinolone exposure occurred. The lower agreement, sensitivity and specificity of the FQ-Form and in-home interview when compared to the overall medical record rather than the outpatient records alone suggest that patients may frequently be unaware of specific medications administered in the hospital. TennCare exposure data did not rely on patient recall, but only 37/177 (21%) study patients were included in the TennCare analysis. The lack of inpatient prescription data was a major factor preventing broader applicability of the TennCare database for capturing complete fluoroquinolone exposure data.

Our study has a number of limitations. First, we used the medical record as the ‘gold standard,’ and assumed that all reported prescriptions were written, filled, and taken, and thus may have overestimated fluoroquinolone exposure. In addition, we assumed that all prescriptions were reported in the medical record. Although patients could have provided incomplete lists of all healthcare providers for research staff to review, health department records were also available to help identify healthcare contacts for record review, which makes this assumption reasonable. Furthermore, fluoroquinolones require a prescription in the United States, making missed exposure from medical record review less likely than in settings where fluoroquinolones are available without a prescription. Second, our study population was limited to those who provided consent for the in-home interview and medical record review, and thus did not include all of the patients with culture-confirmed TB during the study period. Third, the TennCare comparison was limited to those enrolled in TennCare and aged <65 years. Fourth, the FQ-Form and the in-home interview methods were both subject to recall bias. Additionally, health department staff may have used available chart data to complete missing data on the FQ-Form during patient assessment at the health department. Finally, our data are from 2007 to 2009, but based on trends in antibiotic prescribing [1] and more recent reports [13], fluoroquinolone use remains high, similar to that of our study period.

Our study demonstrates high rates of fluoroquinolone use before TB diagnosis and suggests that tools such as the FQ-Form implemented at the start of TB care could alert providers to the possibility of fluoroquinolone exposure prior to diagnosis. Given the important role that fluoroquinolones play in the treatment of drug-susceptible and drug-resistant TB, identification of factors that could lead to fluoroquinolone resistance and ultimately jeopardize treatment success will be critical.

Vanderbilt has received research grant funding for Dr Timothy Sterling from Pfizer, Bristol-Myers Squibb and Virco for HIV observational studies. Dr Sterling has served as a consultant for Sanofi, and is a member of the data safety monitoring board for a study funded by Otsuka Pharmaceutical. All other authors declare no competing interests.