Journal of the National Association of Environmental Professionals 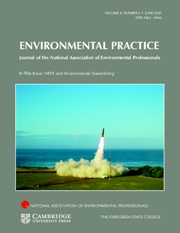