Fossils, Function and Phylogeny: Papers on Early Vertebrate Evolution in Honour of Professor Jennifer A. Clack 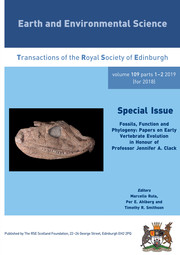