After the Fukushima Daiichi nuclear incident in 2011, radiation contamination of the affected area raised public health concerns about internal radiation exposure.Reference Tsubokura, Gilmour and Takahashi 1 Internal radiation exposure screening using a whole body counter (WBC) (Fastscan Model 2251, Canberra Inc, Meriden, CT) has been performed for the affected residents in Soma City, 40 km north of the Fukushima Daiichi nuclear power plant (Figure 1). Analysis was performed by use of the Apex-InVivo and Genie software (Canberra Inc). Detection limits were 220 Bq for cesium 134 and 250 Bq for cesium 137 with a 2-minute scan. 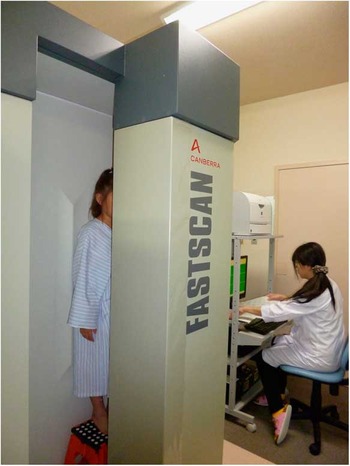 During a WBC screening of a 63-year-old examinee, a prominent peak at 511 keV was unexpectedly seen (Figure 2). Detailed history taking revealed that radioactive fluorine 18 (18F) fluorodeoxyglucose (FDG) was given to the patient the day before the WBC scan for the purpose of cancer screening by positron emission tomography (PET)/computed tomography (CT) scanning.

Figure 2 Results of Whole Body Counter Scanning. We unexpectedly detected a peak at 511 keV (left arrow) that overlapped with the radioactive cesium peak (middle arrow). Potassium 40 was detected at an ordinary level of 1725 Bq/body (right arrow).

FDG-PET/CT scanning is a diagnostic imaging technology that uses the two 511-keV gamma rays emitted at the moment of positron annihilation,Reference Delbeke, Coleman and Guiberteau 2 and the detected peak evidently reflects the remaining [18F]FDG. To our knowledge, this is the first report of detection of an [18F]FDG peak by WBC scanning.

Although the possibility of the presence of medical imaging and therapeutic radioactive isotopes has previously been described as a potential concern in homeland security screening,Reference Dauer, Williamson and Germain 3 , Reference Gitler 4 this case uncovered the undesirable aspect that FDG administered for PET/CT scanning shows a peak adjacent to those of target radionuclides for Fukushima Daiichi incident response WBC screening, such as cesium 134 and cesium 137. Clinicians should be careful not to overestimate the peaks from these target nuclides.

Together with the previous findings about detection of iodine 131 administered for thyroid cancer treatment,Reference Tsubokura, Nomura and Ishii 5 the present results suggest that careful history taking is pivotal for accurate assessment of radiation contamination among residents living in the area affected by the nuclear disaster.