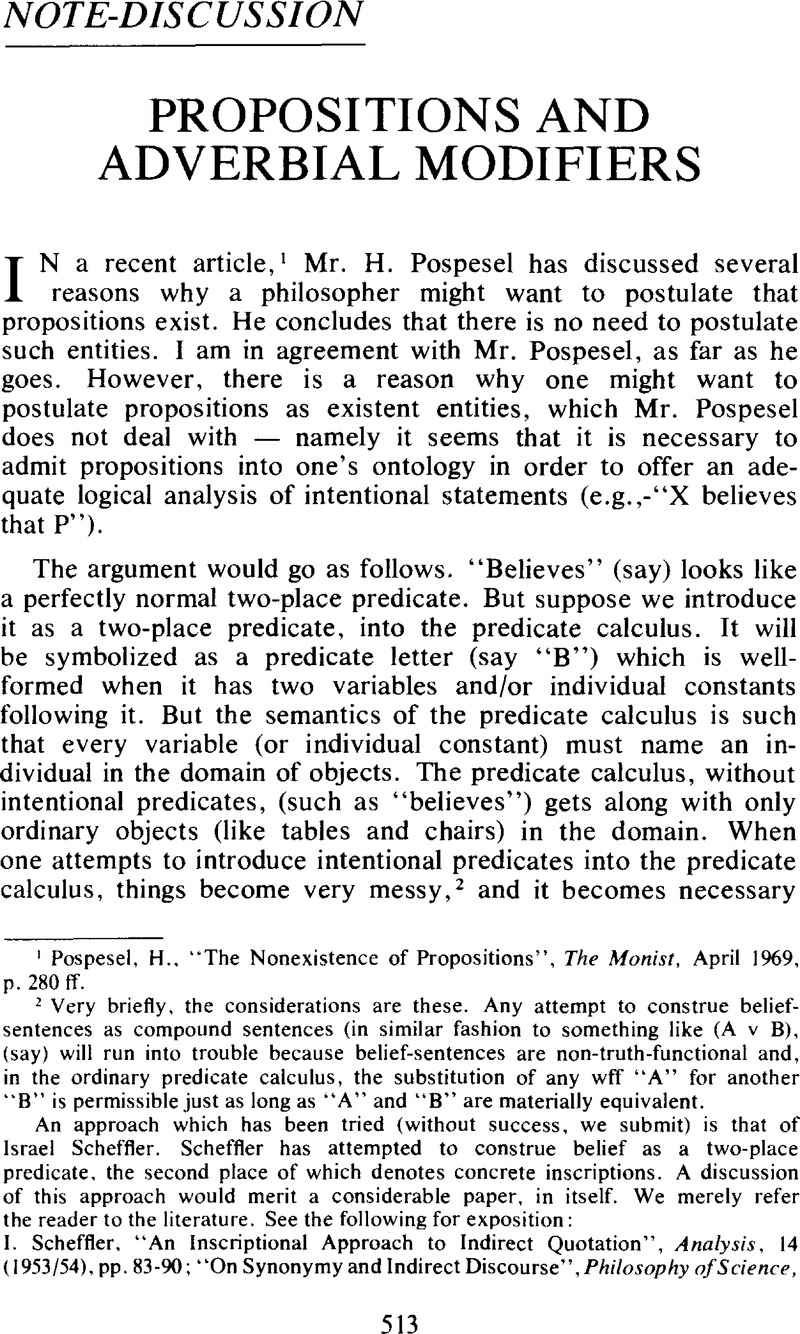 2 Very briefly, the considerations are these. Any attempt to construe beliefsentences as compound sentences (in similar fashion to something like (A v B), (say) will run into trouble because belief-sentences are non-truth-functional and, in the ordinary predicate calculus, the substitution of any wff “A” for another “B” is permissible just as long as “A” and “B” are materially equivalent.

An approach which has been tried (without success, we submit) is that of Israel Scheffler. Scheffler has attempted to construe belief as a two-place predicate, the second place of which denotes concrete inscriptions. A discussion of this approach would merit a considerable paper, in itself. We merely refer the reader to the literature. See the following for exposition:

4 One way to set up the whole thing — predicate calculus, and Clark's system (including intentional predicates and modifiers) would be the following:

Assuming a standard version of the predicate calculus, make the following additions and changes.

To the predicate calculus, add the following:

2. A denumerable set of adverbial modifiers of the following types:

which will correspond to various types of modifiers such as

1. Any single predicate letter ‘Bn’ is an intentional well-formed predicate.

2. Any single predicate letter ‘Fn’ is a non-intentional well-formed predicate.

3. Where ‘B’ is any intentional predicate, and ‘Φ’ is any propositional modifier, then ‘Φ(B)’ is a non-intentional well-formed predicate.

5. Nothing else is a well-formed predicate.

Valuation would be exactly as Clark has outlined it in the Nous paper cited above. Notice that the setup will not allow something such as “John believes irrationally” to count as well-formed. The machinery could be easily adjusted to allow this as well-formed, if a particular given account of belief required it.

5 It might be argued that since we have now singled out our propositional modifiers as a class distinct unto themselves, the artificiality of the approach is clear; one needs a special class of adverbs simply because “that…” clauses are not genuine adverbs at all.

On the other hand, it can be argued that prepositional adverbs constitute a general class of adverb, which Clark has allowed for (cf. fn. 4, sec. A.2.iv.). After all, they can have almost unlimited content — all possible substitutions for “W” in “[W]”.