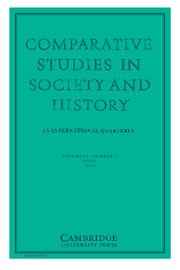 The research on which this paper is based took place between 2005 and 2013. Fieldwork during 2005 was supported by a grant from the Economic and Social Research Council, UK. I am grateful to the Council for its generous support. Later research in 2006, 2007, and 2011 was support by Keele University, with further research in 2012–2013 supported by the Wenner-Gren Foundation. The paper benefited greatly from comments by Richard Werbner and by a range of journal reviewers.