Comorbidity of personality disorder in obsessive-compulsive disorder: special emphases on the clinical significance 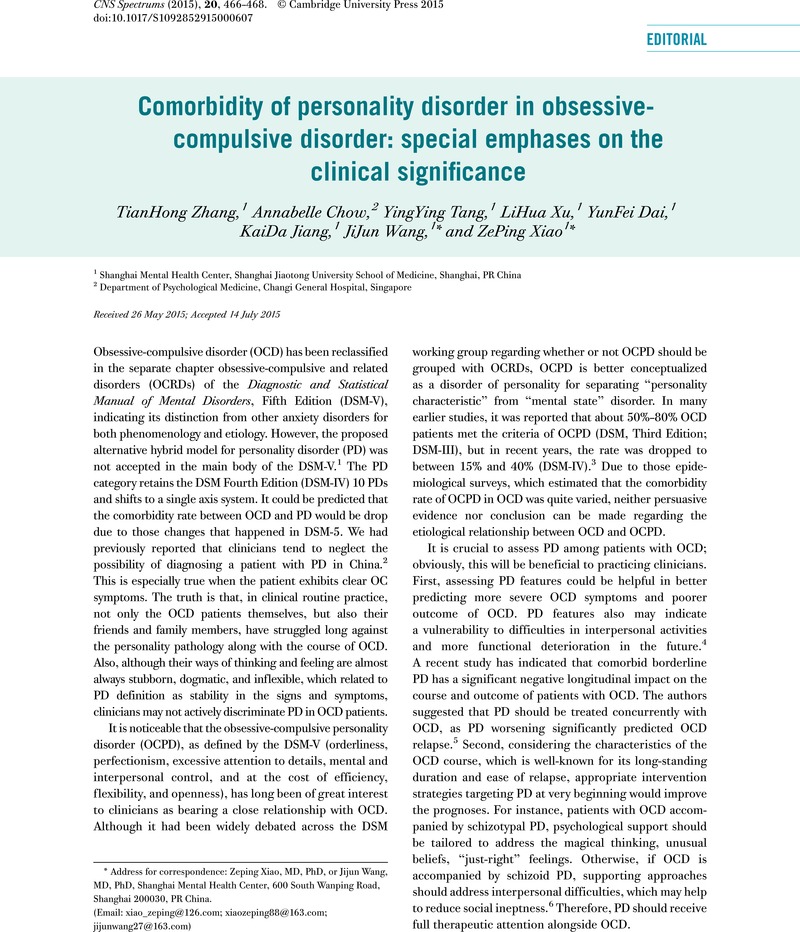 Obsessive-compulsive disorder (OCD) has been reclassified in the separate chapter obsessive-compulsive and related disorders (OCRDs) of the Diagnostic and Statistical Manual of Mental Disorders, Fifth Edition (DSM-V), indicating its distinction from other anxiety disorders for both phenomenology and etiology. However, the proposed alternative hybrid model for personality disorder (PD) was not accepted in the main body of the DSM-V.Reference Skodol, Morey, Bender and Oldham1 The PD category retains the DSM Fourth Edition (DSM-IV) 10 PDs and shifts to a single axis system. It could be predicted that the comorbidity rate between OCD and PD would be drop due to those changes that happened in DSM-5. We had previously reported that clinicians tend to neglect the possibility of diagnosing a patient with PD in China.Reference Zhang, Wang and Good2 This is especially true when the patient exhibits clear OC symptoms. The truth is that, in clinical routine practice, not only the OCD patients themselves, but also their friends and family members, have struggled long against the personality pathology along with the course of OCD. Also, although their ways of thinking and feeling are almost always stubborn, dogmatic, and inflexible, which related to PD definition as stability in the signs and symptoms, clinicians may not actively discriminate PD in OCD patients.

It is noticeable that the obsessive-compulsive personality disorder (OCPD), as defined by the DSM-V (orderliness, perfectionism, excessive attention to details, mental and interpersonal control, and at the cost of efficiency, flexibility, and openness), has long been of great interest to clinicians as bearing a close relationship with OCD. Although it had been widely debated across the DSM working group regarding whether or not OCPD should be grouped with OCRDs, OCPD is better conceptualized as a disorder of personality for separating “personality characteristic” from “mental state” disorder. In many earlier studies, it was reported that about 50%–80% OCD patients met the criteria of OCPD (DSM, Third Edition; DSM-III), but in recent years, the rate was dropped to between 15% and 40% (DSM-IV).Reference Fineberg, Sharma, Sivakumaran, Sahakian and Chamberlain3 Due to those epidemiological surveys, which estimated that the comorbidity rate of OCPD in OCD was quite varied, neither persuasive evidence nor conclusion can be made regarding the etiological relationship between OCD and OCPD.

It is crucial to assess PD among patients with OCD; obviously, this will be beneficial to practicing clinicians. First, assessing PD features could be helpful in better predicting more severe OCD symptoms and poorer outcome of OCD. PD features also may indicate a vulnerability to difficulties in interpersonal activities and more functional deterioration in the future.Reference Huang, Hwang, Huang and Hwu4 A recent study has indicated that comorbid borderline PD has a significant negative longitudinal impact on the course and outcome of patients with OCD. The authors suggested that PD should be treated concurrently with OCD, as PD worsening significantly predicted OCD relapse.Reference Keuroghlian, Gunderson and Pagano5 Second, considering the characteristics of the OCD course, which is well-known for its long-standing duration and ease of relapse, appropriate intervention strategies targeting PD at very beginning would improve the prognoses. For instance, patients with OCD accompanied by schizotypal PD, psychological support should be tailored to address the magical thinking, unusual beliefs, “just-right” feelings. Otherwise, if OCD is accompanied by schizoid PD, supporting approaches should address interpersonal difficulties, which may help to reduce social ineptness.Reference Brakoulias, Starcevic and Berle6 Therefore, PD should receive full therapeutic attention alongside OCD.

From an etiological point of view, the prevalence of PD comorbidity among patients with OCD implies that both share common phenomenological and neuro-biological characteristics. Especially, a model linking OCPD to OCD may also act as one of the key etiological hypotheses on OCRD.Reference Fineberg, Sharma, Sivakumaran, Sahakian and Chamberlain3 Other than a cross-sectional investigation on PD assessment among OCD patients at a large scale, future research can consider following up with OCD patients diagnosed with PD to ascertain how the disorders are capable of acting on or influencing each other. Researchers should also test a few hypotheses in an effort to enhance our understanding of their inter-relationsReference Andersen and Bienvenu7. The following are a few possibilities:

Thus far, we have concluded that assessing PD among OCD patients would enable the improvement of therapeutic strategy and the development of appropriate risk factors tailored to OCD patients’ clinical and functional outcomes. However, there are no reports on the prevalence of PD in Chinese patients with OCD in the existing literature. Even in the Chinese literature, the data regarding pathological personality in OCD are rare. Since we had conducted an epidemiologic survey on PD in our clinical settings in Shanghai,Reference Zhang, Wang and Good2, Reference Zhang, Chow, Wang, Dai and Xiao8–Reference Zhang, Chow and Wang10 it would be valuable to present summarized data on comorbidity rates between PD and OCD. A random sample of 3402 subjects was randomly taken from the largest outpatient mental health clinic offering medication management and psychotherapy in China. These outpatients looking for professional help are from different parts of the country. Of the whole sample, 3075 subjects met enrollment criteria and were included in the study. A self-reported questionnaire and face-to-face interview were administered to gather information on DSM-IV PDs and OCD. 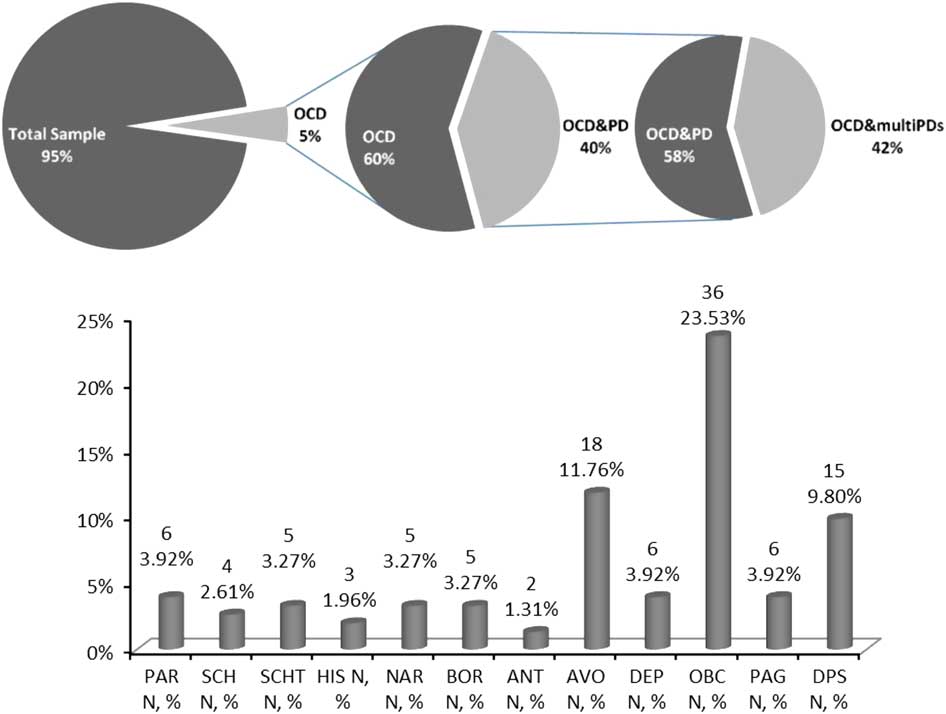 It is becoming clearer now that personality pathology and OCD are often closely related. Though there remains much work to do to determine either the diagnostic validity of PD or the psychological model that describes the interactivity between PD and psychopathology, it is necessary to put pressure on psychiatrists to pay more attention to personality traits when considering a therapeutic intervention for OCD patients. We highly suggest prioritizing treatment for OCD, whereas PD should be treated concurrently with OCD. A more in-depth model that relates personality traits to OCD should be the emphasis and direction of future research.

TianHong Zhang has the following disclosures:

Annabelle Chow has the following disclosure:

YingYing Tang has the following disclosure:

LiHua Xu has the following disclosure:

YunFei Dai has the following disclosure:

KaiDa Jiang has the following disclosure:

JiJun Wang has the following disclosure:

ZePing Xiao has the following disclosure

Comorbidity of personality disorder in obsessive-compulsive disorder: special emphases on the clinical significance
×

Comorbidity of personality disorder in obsessive-compulsive disorder: special emphases on the clinical significance
×

Comorbidity of personality disorder in obsessive-compulsive disorder: special emphases on the clinical significance
×
×