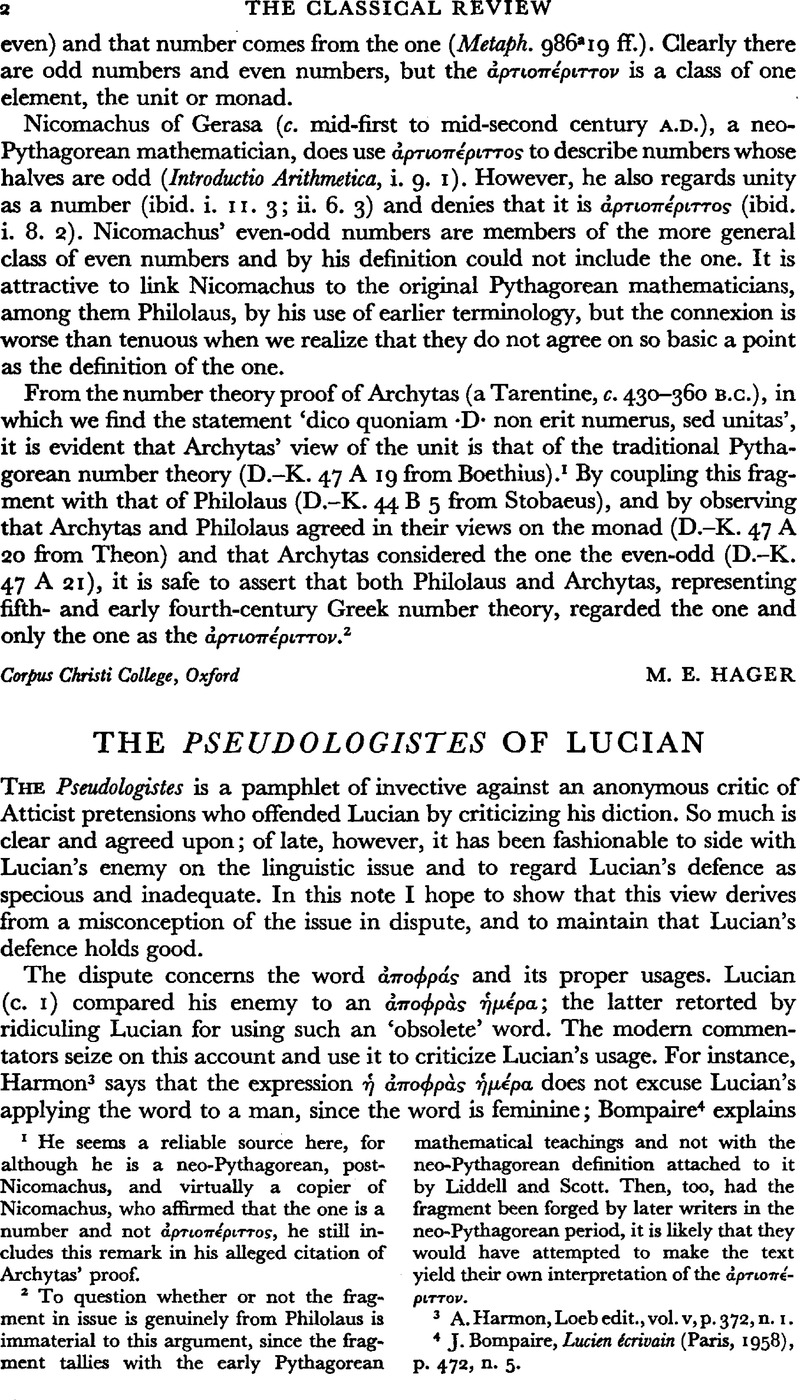 page 2 note 1 He seems a reliable source here, for although he is a neo-Pythagorean, post-Nicomachus, and virtually a copier of Nicomachus, who affirmed that the one is number and not ⋯ρτιοπ⋯ριττος, he still includes this remark in his alleged citation of Archytas' proof.

page 2 note 2 To question whether or not the fragment in issue is genuinely from Philolaus is immaterial to this argument, since the fragment tallies with the early Pythagorean mathematical teachings and not with the neo-Pythagorean definition attached to it by Liddell and Scott. Then, too, had the fragment been forged by later writers in the neo-Pythagorean period, it is likely that they would have attempted to make the text yield their own interpretation of the ⋯ρτιοπ⋯ριττον

page 3 note 1 The incident occurred in Rome on 3 January at the New Year Festival which dated back to King Numa. See cc. 8–9.

page 3 note 3 This refutes the suggestion of Harmon that Lucian may not have known the key passage of Eupolis for the usage of the word.

page 4 note 1 Excellent from the point of view of the purists who always acknowledge the Old Comedy writers as models of Attic style.

page 4 note 2 Note that in c. 32 Lucian uses the word of the masculine τ⋯ν β⋯ον, as another jest.

page 4 note 3 His acting career is convincingly worked out by Minos Kokolakis, Pantomimus and the Treatise Περ⋯ ⋯ρχ⋯σεως (Athens, 1959), pp. 41–51. He establishes a link with Antioch on the evidence of mosaics, and on the historical evidence puts the pamphlet in the years of Verus' reign. It is possible that the sophist came to Rome with the ‘crowds’ of actors brought back by Verus in 165–6 (see Capitolinus, Verus, 8. 11).

page 4 note 4 The passage runs: γρ⋯μματος ⋯ν⋯ςπροσθ⋯κῃ τιμ⋯σαντ⋯ς σε Ἀτ1F77;νου τι περιττ⋯τερον προσεྶνα⋯ σοι. Helm and Bompaire accept the identification without any reservations; Harmon, however, explains it as a literary allusion, meaning that the Sophist was even worse than the Timarchus whose vices were castigated by Aeschines. The identification ultimately goes back to the title κατ⋯ Τιμ⋯ρχου in the manuscripts, but there is equal authority for the reading κατ' Ἀτιμ⋯ρχου. No trace of the name Timarchus in the Roman Imperial period appears in the list in R.E. 6A. 1234–9.