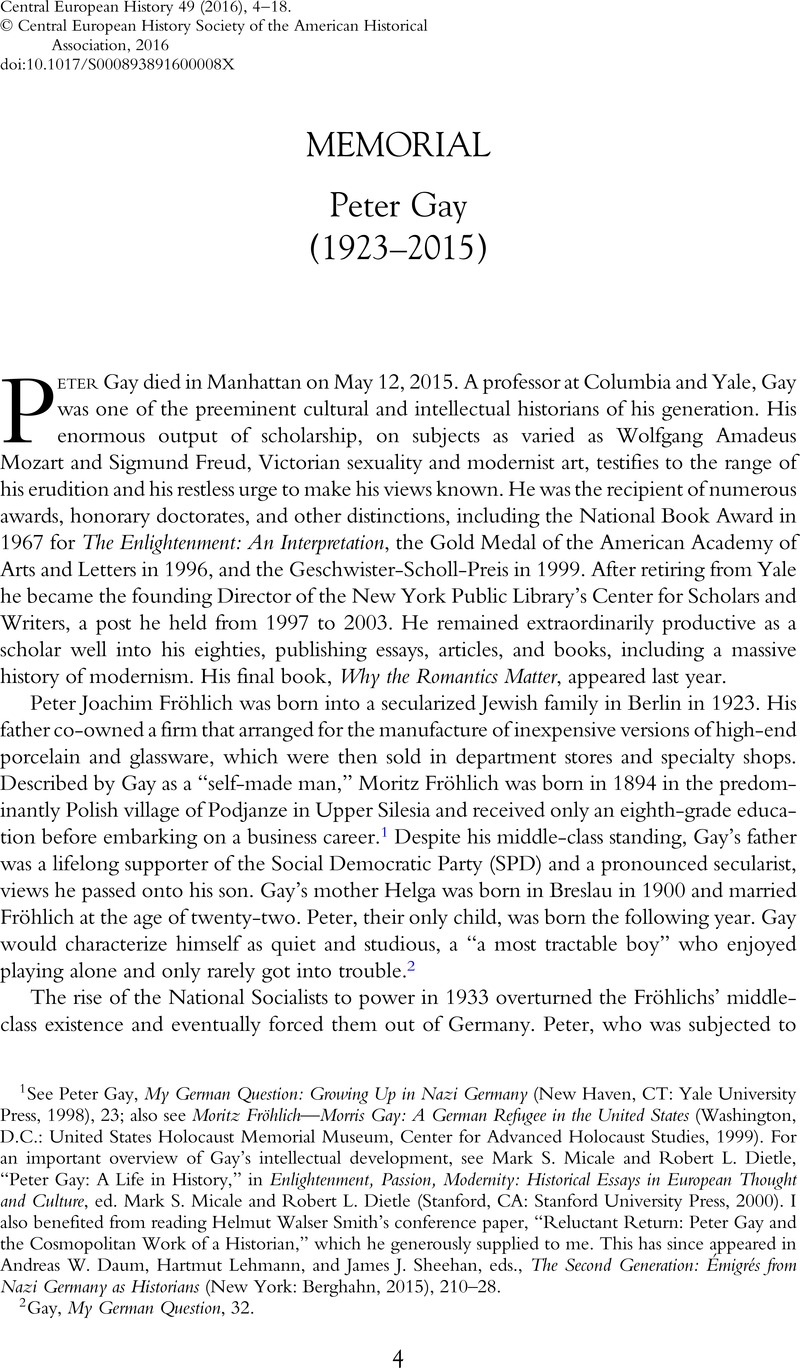 11 Hallowell was the author of The Decline of Liberalism as an Ideology, With Particular Reference to German Politico-Legal Thought (London: Kegan Paul, 1946), as well as Main Currents in Modern Political Thought (New York: Henry Holt, 1950); Kirk, one of the founders of “traditionalist conservatism,” was the author of The Conservative Mind, from Burke to Santayana (Chicago: Regnery, 1953)

15 Gay, “The Enlightenment in the History of Political Theory,” 379.

17 Here, as elsewhere, Gay was deeply influenced by Ernst Cassirer, The Philosophy of the Enlightenment [1932], trans. Fritz C. A. Koelln and James P. Pettegrove (Princeton, NJ: Princeton University Press, 1951). On the distinction between seventeenth-century rationalism and the pronounced empiricism of the philosophes (with Kant, of course, providing the necessary synthesis), see pp. 93–133.

20 Peter Gay, The Party of Humanity: Essays in the French Enlightenment (New York: Alfred Knopf, 1964), x. In referring to an intellectual history focused on “cultural clichés,” Gay may have had in mind the work of Richard Hofstadter (e.g., Anti-Intellectualism in American Life [New York: Knopf, 1963]). For a later (slightly different) formulation of the “social history of ideas,” with greater emphasis on its contrast with Marxist approaches, see Gay, Voltaire's Politics, 2nd ed., xiv-xv.

39 Ibid. Another factor may have been Gay's desire to avoid becoming ensnared in the Sonderweg question, which seemed to loom over his early plans for a cultural history of the German empire. For evidence of this, see esp. Gay, Freud, Jews and Other Germans, 1–28.

51 In a particularly critical review of The Cultivation of Hatred, James R. Kincaid made the comparison explicit: “Gay waves away Michel Foucault and his followers in a bibliographical note, but compared to Foucault's work this volume is very pale indeed, facile and shallow, making one wish that the two historians were not so rudely divided: one has all the note cards and the other all the ideas.” See “Victorian's Secret,” The New York Times, Sept. 5, 1993.

52 There were heroes in this struggle and there were also villains. A graduate student at Yale once described how Gay had reacted angrily to a passage in his seminar paper, not because his analysis was weak or his research poor, but because Gay so disliked a quote in it from Thomas Carlyle.

57 See esp. ibid., ix, on the role of counter-transference in the writing of modern German history.

58 Whereas Cassirer presents Kant as the philosopher who synthesized the Enlightenment traditions of rationalism and empiricism, Kant plays almost no role in The Enlightenment: An Interpretation, which presents the story as largely complete by the end of the 1770s—just in time for the American Revolution.