We present a case of percutaneous coronary intervention in a 4-month-old infant with both severe coronary stenosis and acute heart failure after arterial switch operation for transposition of the great arteries. Under extracorporeal membrane oxygenation, balloon angioplasty of the left coronary artery with a 2.0 × 15-mm balloon and stent implantation on the right coronary artery with a 2.25 × 26-mm stent were performed successfully. Echocardiography after the intervention showed recovered cardiac function and no complications. 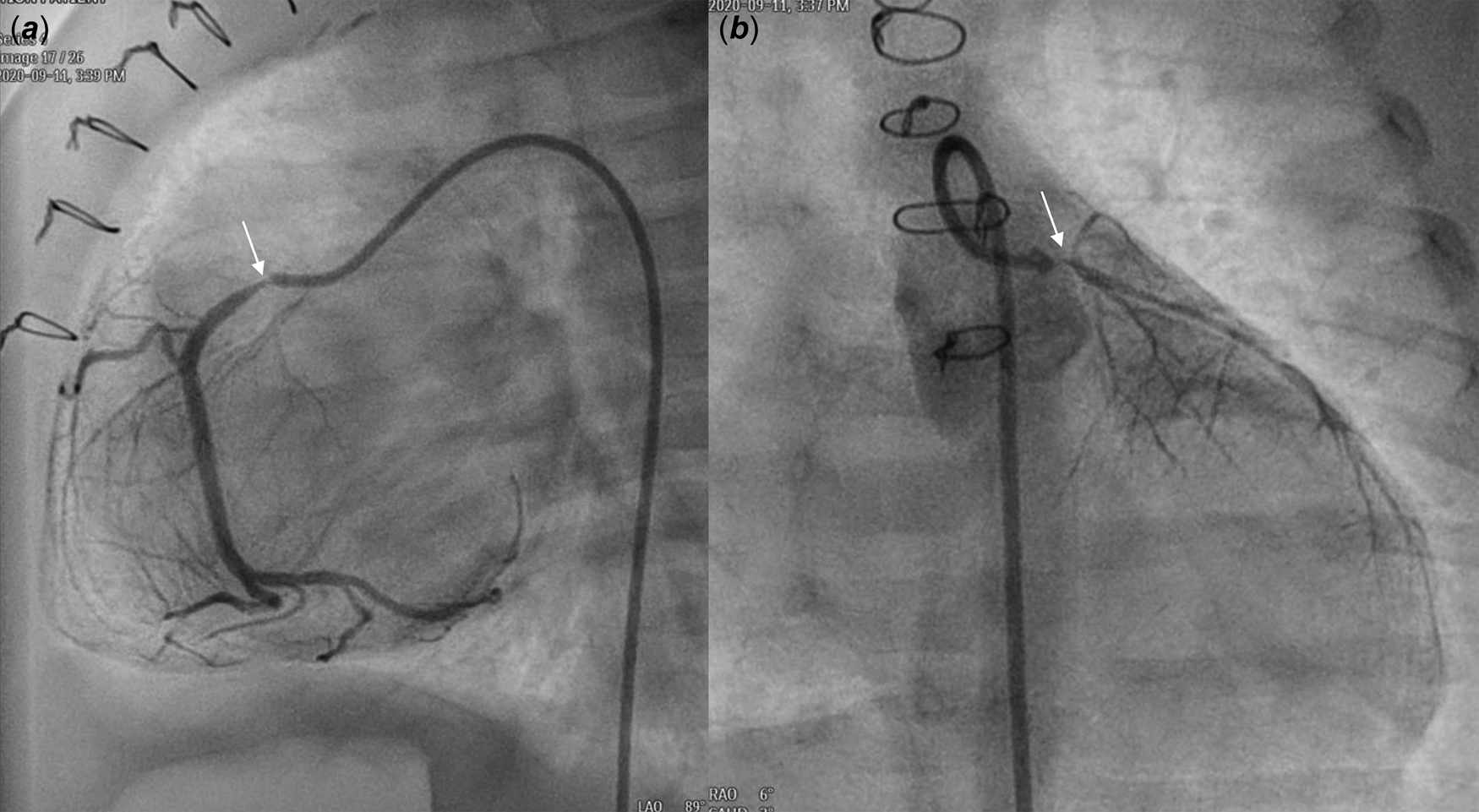 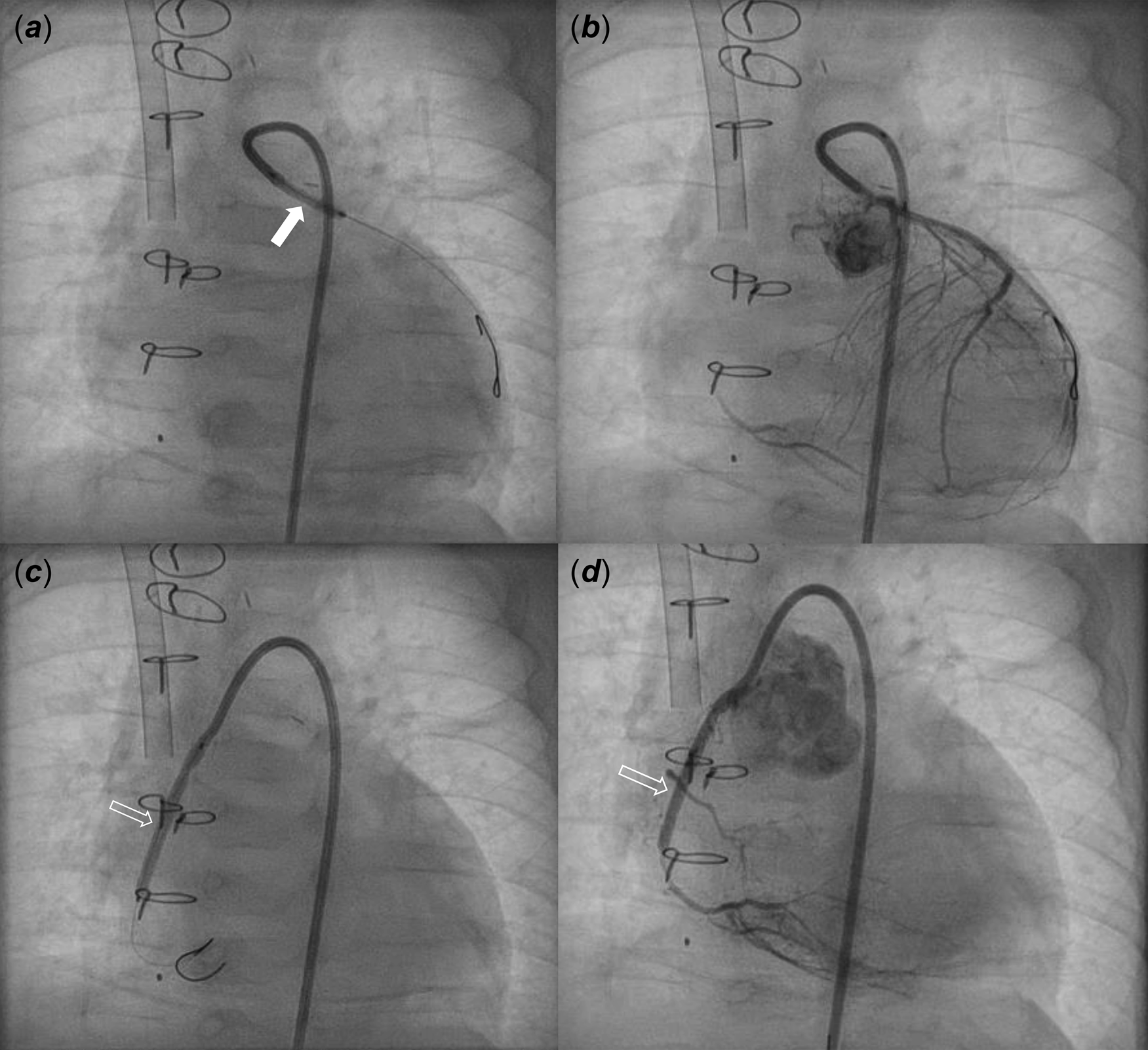 This patient showed definite symptoms and marked ventricular dysfunction due to severe coronary stenosis early after arterial switch operation. Coronary intervention should be attempted in patients with ischemic symptoms and signs, even in the early period after arterial switch operation. The most common reason for coronary complications after arterial switch operation is an intramural course of the coronary artery, as in our patient. There can be several reasons for stenosis, including thrombus formation, intimal proliferation, excessive scar formation or distortion, and compression. We did not perform coronary artery bypass graft at the onset of ischemic symptoms due to technical difficulties related to the small size of the internal mammary artery. Although previous reports have shown satisfactory outcomes after percutaneous coronary intervention in small children after arterial switch operation, Reference Kampmann, Kuroczynski, Trubel, Knuf, Schneider and Heinemann6-Reference Hausdorf, Kampmann and Schneider8 it is a very risky procedure with various peri-procedural complications. Reference Schneider, Wiebe, Hraska and Zartner9 Pre-procedural extracorporeal membrane oxygenation application might be very helpful in a symptomatic and unstable infant. From Callahan’s experience, successful percutaneous coronary interventions were performed on extracorporeal membrane oxygenation support in 46% of patients. Reference Callahan, Lock, Shah and Marshall4 One of the trickiest procedures was catheter engagement in the implanted coronary artery. Reshaping of the guiding catheter often was helpful. Reference Cai, Kramer, Bandisode and Fernandes5 Percutaneous coronary intervention in these patients should be performed carefully to prevent dissection due to the small size of vessels. In addition, a somewhat larger balloon and stent were required. The location, length, and mechanism of stenosis should be established for successful procedures. Over-expansion was recommended to avoid restenosis. Reference Kampmann, Kuroczynski, Trubel, Knuf, Schneider and Heinemann6 The long-term outcomes of percutaneous coronary intervention in patients after arterial switch operation remain unclear because of the small number of patients. From percutaneous coronary intervention data across all indications in children, at least one re-dilatation in 73% of implanted stents and stent thrombosis in up to 3% of children were reported. Reference Stanfill, Nykanen, Osorio, Whalen, Burke and Zahn10,Reference Shaffer, Mullins and Grifka11 Nevertheless, standard antiplatelet therapy regimens and duration have not been established, though dual antiplatelet therapy for 6 months is tolerated in general. For this patient, we are planning to use aspirin and clopidogrel for 6 months, and coronary angiography will be repeated. In the long term, we are considering right coronary bypass graft surgery.

This research received no specific grant from any funding agency, in the commercial or not-for-profit sector.

The authors assert that all procedures contributing to this work comply with the ethical standards of the relevant national guidelines on human experimentation and with the Helsinki Declaration of 1975, as revised in 2008, and has been approved by the institutional committees (Samsung medical center). 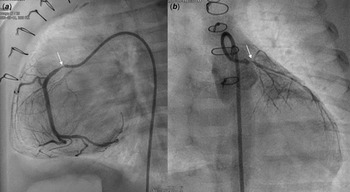 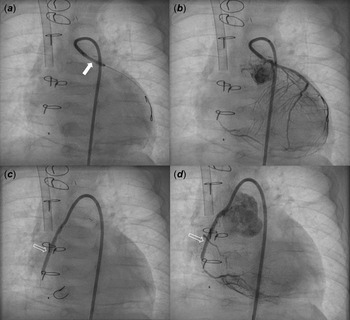