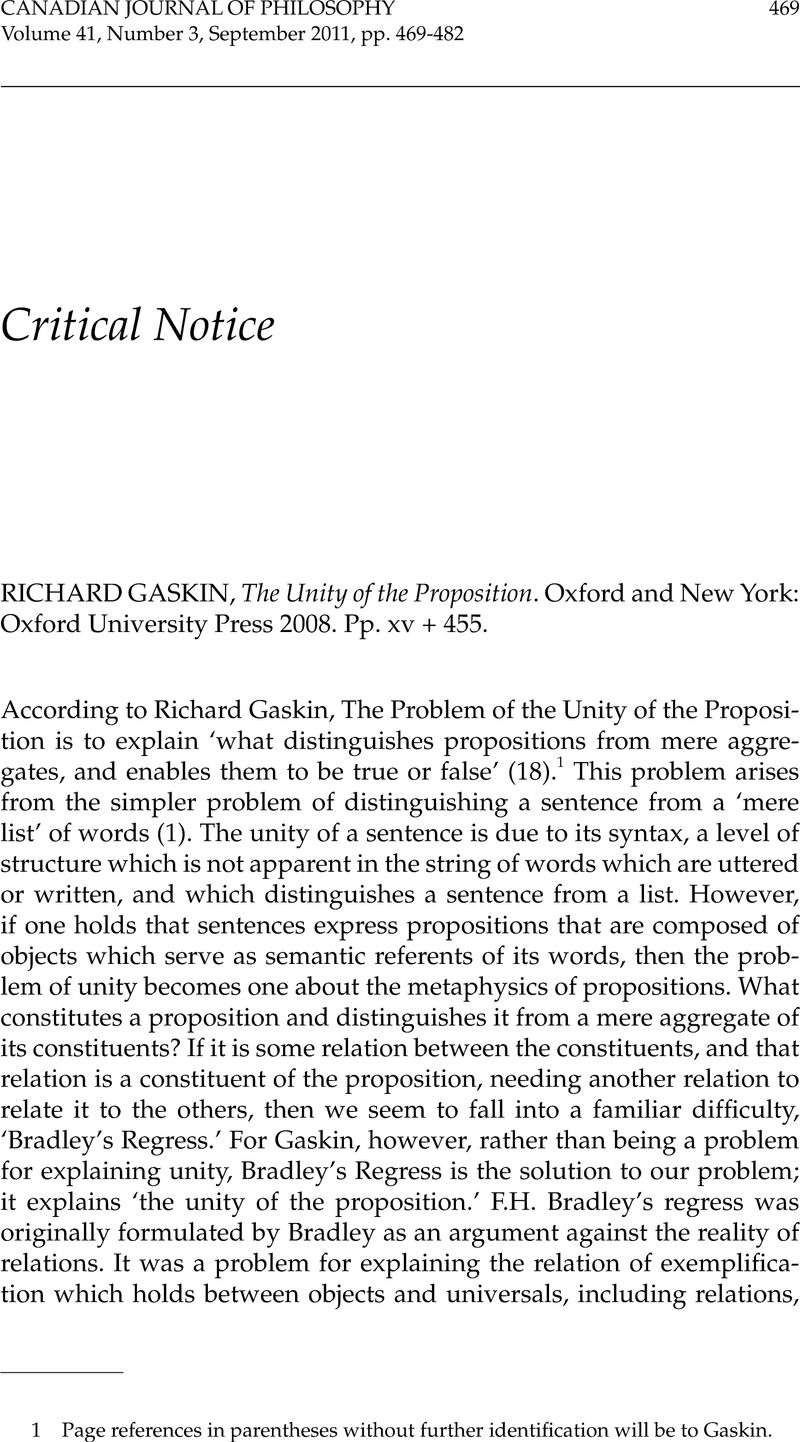 1 Page references in parentheses without further identification will be to Gaskin.

2 This notion of ‘Linguistic Idealism’ comes out of Gaskin's Experience and the World's Own Language: A Critique of John McDowell's Empiricism (Oxford: Clarendon 2006). Gaskin appreciates how odd this sounds: ‘How, someone might complain, can propositions at the level of reference (whether true or false) both be worldly entities — as they must if they really exist at the level of reference — and also say something?’’ (114).

6 I am grateful to an anonymous referee for the CJP for pointing out Gibson's book. Consequently, I owe to the referee the observation that neither Gibson nor Davidson believes in propositions as entities, and that perhaps much of the interest in The Problem of the Unity of the Proposition is really in the move from the theory of reference to a theory of the semantics of sentences, whether or not that involves propositions as entities. For most the problem is indeed explaining the difference between a sentence (with truth conditions) and a list of names (which refer).

7 See (L. Linsky, 259): ‘Having acknowledged his inability to solve the problem of the unity of the proposition when it is first presented in Principles, Russell does not return in later publications to make further attempts at a resolution.’

9 Russell's marginal at the occurrence of the context principle at § 62 is simply a question mark, ‘?’ and otherwise he ignores this allegedly fundamental principle in both the marginal comments and his notes for Appendix A of Principles. (He notices the concept/object distinction when it occurs in the list of four fundamental principles along with the context principle on p. x.) (See B. Linsky ‘Russell's Marginalia’ (2004) above and Bernard Linsky, ‘Russell's Notes on Frege for Appendix A of The Principles of Mathematics,’ Russell: The Journal of Bertrand Russell Studies 25 (2005): 133-72.

11 George Bealer suggested this to me in conversation in response to the presentation of my: ‘From Descriptive Functions to Sets of Ordered Pairs,’ in Reduction — Abstraction — Analysis: Proceedings of the 31st International Ludwig Wittgenstein Symposium in Kirchberg, 2008, Alexander Hieke and Hannes Leitgeb, eds. (Frankfurt: Ontos Verlag 2009) 259-72.

12 More precisely known as ?-conversion, but this name from Church's original has stuck (The Calculi of Lambda-Conversion [Princeton: Princeton University Press 1941]).

14 In ‘Demonstratives,’ originally presented in 1970 and hence influential long before its eventual publication in Themes from Kaplan, Almog, JosephPerry, John and Wettstein, Howard eds. (Oxford: Oxford University Press 1989). (The source of ‘Russellian Propositions’ as a label appears to be the passage on 496: Three paragraphs ago I sketched a metaphysical picture of the structure of a proposition. This picture is taken from the semantical parts of Russell's Principles of Mathematics.’

15 The reader will notice that earlier footnotes suggest both Russell's own attitudes towards these various problems that arose after Principles of Mathematics, and that those problems are distinct. Russsell says that he has no solution to his Problem of the Unity of the Proposition, and I suspect that neither should we.