Painted Mules and the Cartesian Circle 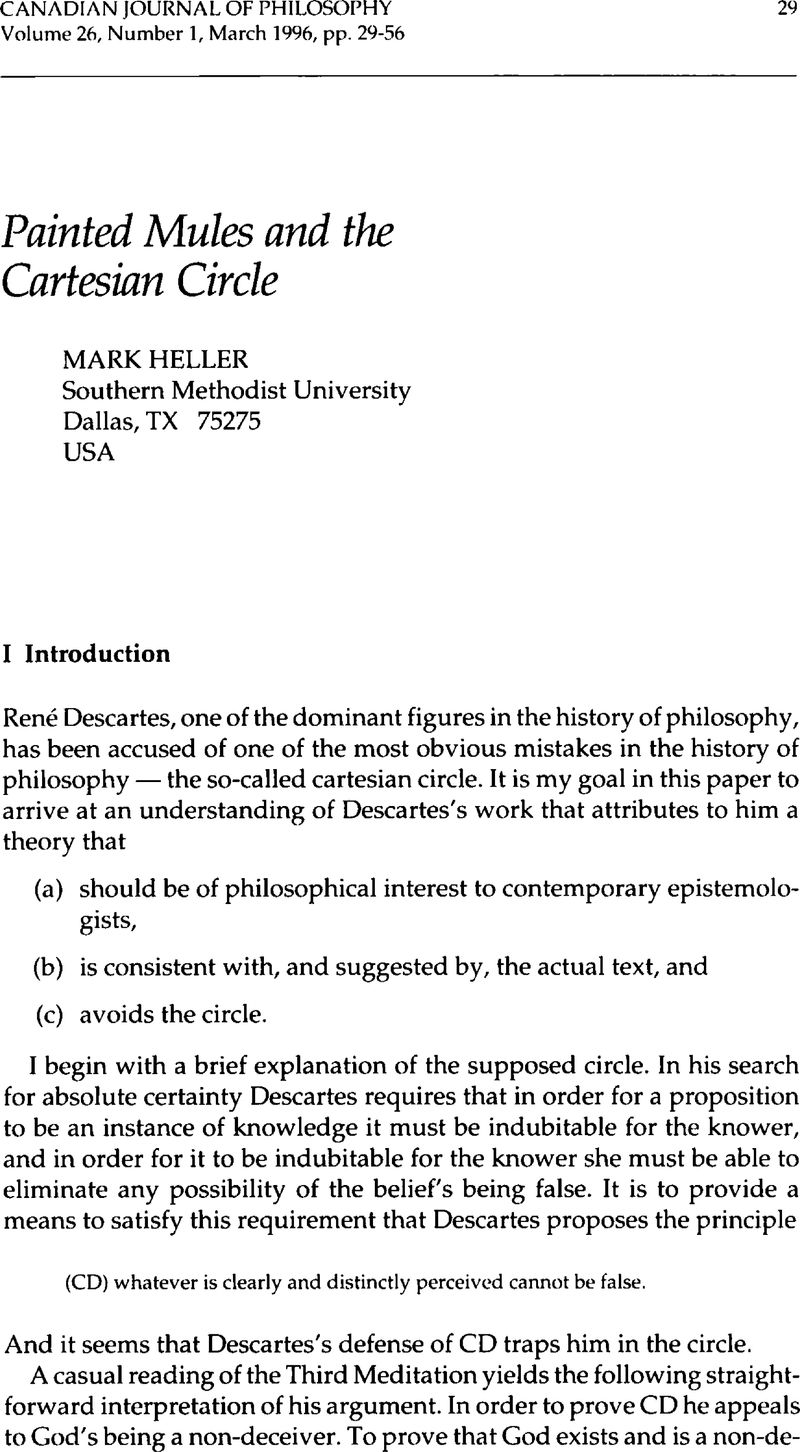 1 Unless otherwise noted, all references are to The Philosophical Writings of Descartes, Cottingham, JohnStoothoff, Robert and Murdoch, Dugald trans. (Cambridge, England: Cambridge University Press 1984), hereafter CSM. The apparent problem of circularity was pointed out to Descartes many times. Sec, for instance, the Second and Fourth Objections,AT 124-5; CSM II 89 and AT VII 214; CSM II 150.

2 Some will insist that, even if every other belief is included, a belief about one's own existence must be exempted from Descartes's claim that he cannot be certain of anything until he proves God's existence. I will later be able to explain why this kind of knowledge, though not exempt in principle, should seem to be exempt. See note 11.

6 Dretske, Fred ‘Epistemic Operators,’ The Journal of Philosophy 67 (1970) 1007-23. All page references to Dretske's work in the body of the paper refer to this article.

8 In Frankfurt's criticism of Doney, he acknowledges that there is good textual evidence for the temporary knowledge interpretation that Doney and I agree about, but appeals to both philosophical and textual evidence to attack Doney at the point at which Doney and I differ- Doney's emphasis on the reliability of memory. See especially Frankfurt's section IV: ‘In these passages, Descartes indicates that memory has something to do with the problem he was trying to solve by proving God's existence, but he says nothing that requires Doney's view of the relevance of memory to his argument…. Descartes's problem is not whether memory is reliable, but whether what is recollected - that something was deduced from principles which were evident - is sufficient to establish the truth of the conclusion in question.'

9 Descartes affirms that what makes a belief vulnerable is not an actual consideration of the evil genius possibility, but the mere potential consideration of that possibility in his discussion of the atheist. The atheist cannot have ‘true knowledge, since … he cannot be certain that he is not being deceived …. And although this doubt may not occur to him, it can still crop up if someone else raises the point or if he looks into the matter himself’ (AT VII 141; CSM II 101).

10 It may seem that the arithmetic knowledge is more vulnerable than one's knowledge of one's own existence, because it may seem that, though there are cases in which the arithmetic proposition is considered without being known, there are no such cases for self-existence. This would be so if any time one considers the proposition that one exists one clearly and distinctly perceives its truth. However this does not show that this kind of knowledge is less vulnerable in principle. Even this knowledge is lost when not being clearly and distinctly perceived.

11 Loeb, Louis ‘The Cartesian Circle,’ in Cottingham, John ed., The Cambridge Companion to Descartes, (Cambridge, England: Cambridge University Press 1992), and Bennett, Jonathan ‘Truth and Stability in Descartes’ Meditations,’ Canadian Journal of Philosophy, Supplementary Volume 6 (1990) 75–108, emphasize the absolute certainty that is produced by clear and distinct perception, though they take this to be a purely psychological fact, whereas Descartes seems clearly to intend it to have epistemological significance.

12 Alston, William presents a nice explanation of the distinction between epistemic levels and the importance of this distinction in ‘Levels Confusion in Epistemology,’ Midwest Studies in Philosophy, V: Studies in Epistemology (Minneapolis: University of Minnesota Press 1980) 135-50. Descartes should not be accused of a levels confusion. Though he does not distinguish the epistemic levels, this failure to distinguish them is a manifestation of his commitment to our ability to have higher order knowledge when we have lower order knowledge. If the mechanism Descartes is using is not infallible, he will not be able to satisfy his own conditions for knowledge. More on this below, in section VII, along with questions about internalism and externalism and the possibility of internal twins.

13 I would like to thank an editor of the Canadian Journal of Philosophy for the formulation of the point in this paragraph.

14 Of course, the deceiving genius hypothesis is not the only possibility of error that must be ruled out. The beauty of appealing to a veracious God to defeat the evil genius hypothesis is that it defeats all other possibilities of error as well, with the exception of human carelessness. Once the theistic proof is complete, Descartes can trust all of his faculties as long as he is using them with adequate care. Presumably Descartes thinks that those cases of misremembering or misperceiving that we are familiar with in every day life are distinguishable from veridical memory and perception either by some internal feel or external evidence about the reliability of the relevant mechanisms on a given occasion of use.

15 It is because Descartes recognizes the possibility of such an objection that he holds that true knowledge requires remembering that he did clearly and distinctly perceive that there is no deceiving genius undermining his knowledge. It is that memory that provides Descartes with the means to answer this objection. The knowledge that he did prove the existence of a veracious God is what allows Descartes the higher order knowledge that he has knowledge when he uses his various epistemic mechanisms. But Descartes explicitly declares that he does not need to remember the proof itself. He must know that the possibility of an evil genius has been eliminated, but this knowledge does not require eliminating that possibility anew.

16 Once again I find myself agreeing in general structure with a suggestion made bv Doney. In his later work, ‘Descartes's Conception of perfect Knowledge,’ in Doney, Willis ed., Eternal Truths and the Cartesian Circle (New York: Garland 1987) 99–115, Doney shifts away from a reliability of memory approach, emphasizing instead the shift in burden of proof that occurs after the theistic proof: ‘on the interpretation proposed, the theist rejects the skeptics's arguments on the ground that, presenting arguments of this sort, he necessarily begs the question. It is incumbent on the skeptic to give reasons for thinking that I it is possible that the theist is not the creature of a Veracious and non-deceiving God I, but the only “reasons” available to him are not reasons at all but a set of propositions to be proved.’ So Doney and I are agreeing that, after Descartes has proven that God exists and is no deceiver, it is the skeptic who would be arguing in a circle in attempting to undermine Descartes's claims to knowledge. However, once again, We part company over the details. One consequence of our differences is that Doney has no way to block the acquisition of true and certain knowledge from the arithmetic argument against the evil genius.

19 See my ‘Relevant Alternatives, Closure, and Skepticism,’ in progress.

20 This is a change from my tentative suggestions on p. 29 of ‘Relevant Alternatives.'

22 See especially Louis Loeb. Jonathan Bennett also presents a psychological interpretation, though he offers it as only one strand of Descartes's writings.

23 My thanks to my colleagues at S.M.U., especially Jean Kazez and David Ring, to the audience at Syracuse University, where I presented an earlier draft of this paper, to an anonymous referee, and to an editor of the Canadian Journal of Philosophy.

Painted Mules and the Cartesian Circle