Mechanism and the Representational Nature of Sensation in Descartes 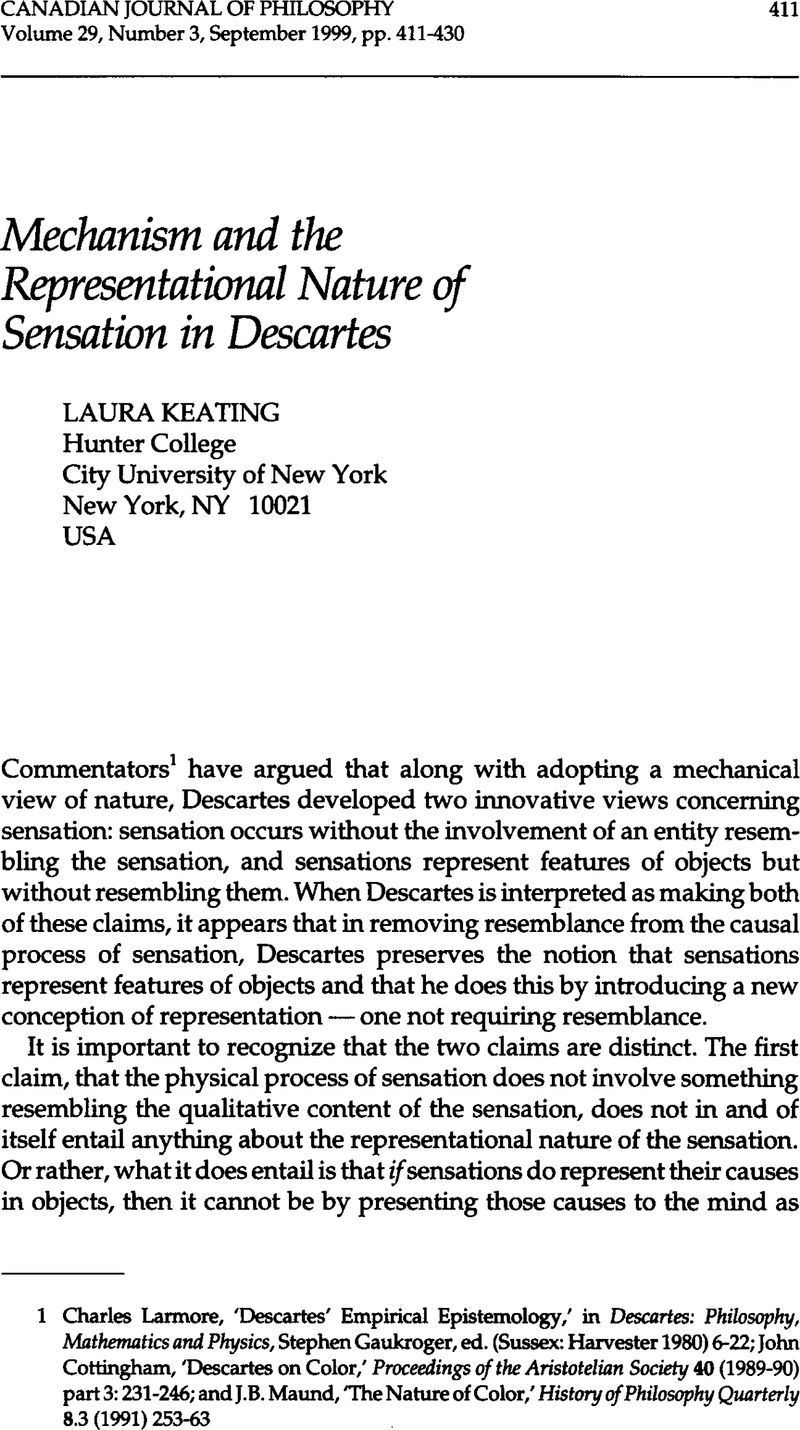 4 He gives the word analogy and the analogy of the blind man with the stick, both of which will be discussed below.

5 In this, and all the quotations that follow, I use the CSM translation.

7 Again, Cottingham states, ‘What Descartes’ approach invites us to notice, however, is that in our perceptions of colour there is something indistinct: that in the case of colour, unlike shape, the nature of what we are attributing to the object goes beyond what is “present and open to the attentive mind“‘(246). See also J.B. Maund, 254-5: ‘Descartes’ view, as I understand it, is and indeed must be, that with respect to our color-experiences we can and should distinguish between the color-as-the-representational content of our experience and the color-as-an-inherent-feature-of the experience. Physical bodies have color in the first sense but do not have color in the second sense. Nevertheless, he contends, there is a natural tendency for us to think that physical bodies do have colors in this second sense — and that thought is a confused one.’ Later he states that Descartes takes ‘sensation to point beyond itself’(260).

9 I understand Larmore's interpretation of the account of representation given in the Optics to be closely similar to, if not the same as, that proposed by MacKenzie, Ann Wilbur in two recent papers: ‘Descartes on Sensory Representation: A Study of the Dioptrics,’ Canadian Journal of Philosophy Supplement 16 (1990) 178-92; and ‘The Reconfiguration of Sensory Experience,’ in Reason, Will and Sensation: Studies in Descartes's Metaphysics, Cottingham, John ed. (Oxford: Clarendon Press 1994) 251-72. One difference is that MacKenzie is explicitly concerned with the representational nature of the brain image, rather than the sensation. She does, however, think that in the Optics Descartes is taking the idea occasioned by the brain to be representational. (See especially ‘Reconfiguration,’ 255-8.) A second difference with Larmore's interpretation is that she thinks that Descartes, at least after the Optics, takes sensations to be non-representational because for him representation consists in presentation. (See especially ‘Reconfiguration,’ 264-5.)

10 Larmore notes that although Descartes explicitly takes color to represent certain aspects of light, namely, the rotational velocities of the corpuscles constituting it, given his generalized account of representation, he could have also taken color to represent the mechanical structures in objects which cause particular rotational velocities. He thinks that Descartes failed to do so only because he did not speculate about the nature of such structures (15). Given this, for the sake of brevity, in discussing Larmore's view, I will take him (like Cottingham) to be asserting that sensations represent their causes in objects, even though they may also represent certain aspects of the medium -light or air- which cause them.

12 Again, for a clear presentation of this view see MacKenzie, ‘Reconfiguration,’ 256-7.

15 Technically, both Cottingham and Larmore take the word analogy to be between words and sensations, rather than between words and brain images, or the motions producing the sensations. See Cottingham, 244, and Larmore: ‘[Descartes] compared ideas of colour to scripts or languages that bear a systematic relation to what they represent without resembling it’ (15). In The World (AT XI 4, CSM I 81), however, the sign is what makes us have the sensation of light, and similarly, in the Optics (AT VI 112, CSM I 165), the word is being compared to that in the brain which is able to excite sensations. My treating them as understanding the analogy as between words and the brain images producing the sensory ideas does not really misrepresent their views insofar as the spirit of their interpretations is maintained: the sensory idea produced by the brain image is understood to be representative of the cause of the image but without resembling that cause.

16 This is true of Cottingham's dual-content view as well as the mark view. On the dual-content view, the intrinsic reference of the sensation to its cause in objects is dependent on the causal connection (see Cottingham, 244-5).

17 It may be objected that nonetheless the representational account is supported by the fact that elsewhere, namely in the Third Meditation, Descartes refers to certain ideas as images in order to indicate their representationality: ‘Some of my thoughts are as it were the images of things [tanquam rerum imagines], and it is only in these cases that the term “idea” is strictly appropriate- for example, when I think of a man, or a chimera, or the sky, or an angel, or God’ (AT VII 37, CSM II 25). In the French translation, the connection between being an image or like an image and representing something to the mind is made more explicitly not only in the passage corresponding to that just cited (AT IX-1 29) but also in two other passages in the Third Meditation: AT IX-1 31, CSM II 27-28, where he notes that distinctions can be made between ideas only when considering them as images, in which case they each represent different things to us, and at AT IX-1 34-5 where he attributes the material falsity of sensations to the fact that ideas insofar as they are images will all seem to represent something. The objection would thus be that in calling the brain impressions ‘images,’ Descartes is implying that they represent something to the mind. The sense of representation, however, that is being implied by this term in the Meditations does not support the representational model presented above. First, in that stage of the Meditations, Descartes is discussing internal differences between thoughts. Thus, the significance of calling some idea an image cannot be to indicate that the idea corresponds to some external entity it may be said to represent, since such correspondence is clearly not internally accessible in the Third Meditation. Rather, in describing something as an image he seems to be indicating that it presents the mind with certain positive content. Second, in his introduction of materially false ideas, Descartes notoriously claims that it may be the case that some ideas that are as ‘images’ do not make the mind think of anything that exists external to it. He claims, however, that such ideas represent some positive content to the mind. Thus, if we do apply to the Optics the connection between being an image and representing implied in the Meditations, the force of calling the brain motions ‘images’ would not be to imply that they correspond to external features which the ideas they produce would then represent in some way, but that they provide the mind with particular positive content which may or may not represent anything existing outside the mind.

18 That is, the analogy of the engraving would not be understood as stimulating ideas representative of external objects, but just as stimulating ideas whose content is a three-dimensional object. Similarly, the analogy of the blind man would not be understood as the sticks giving us ideas of the causes of the motions of the sticks but just giving us ideas which vary as the motions vary and in terms of which we distinguish bodies.

20 Space constraints prevent the full development of this claim. Part of what needs to be spelled out is the nature and role of mental acts of judgment in sense perception. For a discussion of the issues and possible positions see Wilson, Margaret ‘Descartes on the Perception of Primary Qualities,’ in Essays on the Philosophy and Science of Rene Descartes, Voss, Stephen ed. (Oxford: Oxford University Press 1993) 162-76.

25 Even the idea of the sun that we get through sense perception involves features the sun does have in itself, such as being located in the sky and having some shape and size, although not the one we perceive it as having.

26 See Chapter One of The World, where Descartes states, ‘if the sense of hearing transmitted to our mind the true image of its object then, instead of making us conceive the sound, it would have to make us conceive the motion of the parts of the air which is then vibrating against our ears’ (AT XI 5, CSM I 82). On representational and common sense realist accounts of sensory qualities the object of a sensation is its cause. Thus, Descartes's reference to the object of sound here should not by itself be taken as evidence that he took sound to have an object, for he could be just speaking hypothetically. As I have argued in the second and the third sections above, given his treatment of sensations in the Optics and in Principles I, there is strong evidence that here he is merely speaking with the vulgar. Similarly, it is important to note that although in several passages Descartes uses locutions such as ‘the sensations we have of bodies’ (‘sentimens que nous en avons,’ AT VI 85, CSM I 153), that is not enough to support the representational account, since the non-representational account will also be able to account for such locutions in terms of judgments we make about the causes of our sensations and our referring them to their causes.

27 I would like to thank Alan Hausman, Steve Bayne and an anonymous reviewer for their comments on earlier drafts of this paper. This research was supported (in part) by a grant from The City University of New York PSC-CUNY Research Award Program.

Mechanism and the Representational Nature of Sensation in Descartes