How Beliefs Find Their Objects 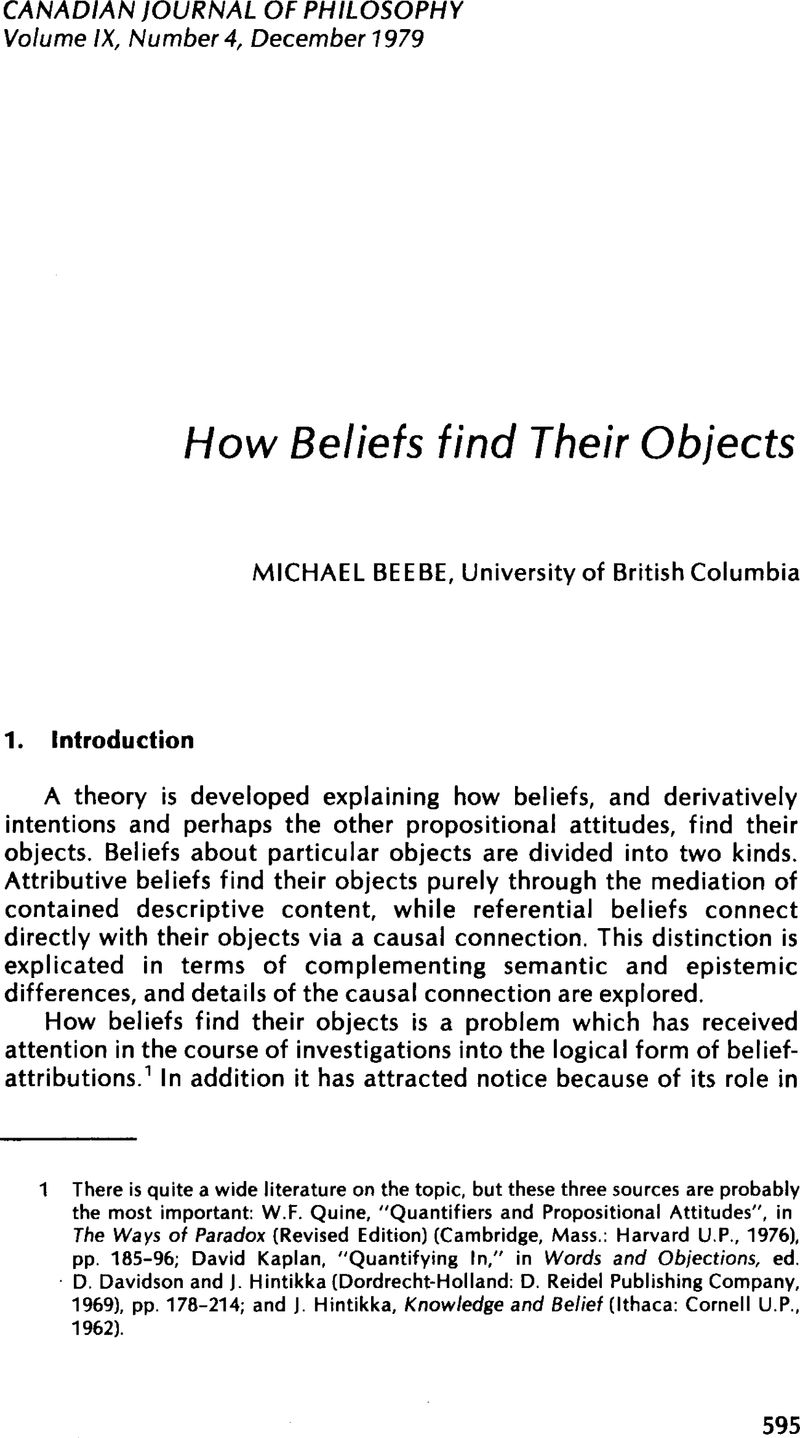 11 These are the main sources: Saul Kripke, “Naming and Necessity,” Donnellan, Keith, “Proper Names and Identifying Descriptions,” in Semantics of Natural Language, ed. Davidson, D. and Harman, G. (Dordrecht-Holland: D. Reidel Publishing Company, 1972), pp. 356-79; and David Kaplan, “Demonstratives”, given at the 1977 Meetings of the Pacific Division of the American Philosophical Association (and also “Dthat”, circulated privately).

13 W.V. Quine, “Quantifiers and Propositional Attitudes.” The explicit avowal of this view occurs on p. 190 in The Ways of Paradox (Revised Edition).

18 Only referential beliefs and intentions find their objects this way, of course, for only they need any sort of causal connection with their objects. Attributive beliefs find their objects purely through their descriptive content. They have places clusters though. An attributive belief about the ϕ will be in the cluster in which one represents to oneself the object which one thinks is in fact the ϕ . But it is a contingent feature of any attributive belief that it has the object it has, while it is an essential feature of a referential belief. The causal element acts in belief analogously to rigid designators in sentences.

19 An example of Donnellan's is relevant here (Keith Donnellan, “Proper Names and Identifying Descriptions“). Suppose one knows A (J. L. Aston-Martin in Donnallan's story) by reputation, knows his written work, and so on. One then meets someone, B, at a party and thinks he is A. Later in talking with a friend one might say “A wrote such-and-such a book” and “A said so-and-so at the party.” In fact it was B and not A who said the things at the party. Now, Donnellan in his discussion of this example seems to suggest that in discussing his books, the speaker refers to A, but that in reporting B's remarks at the party, he refers to Bthough of course the speaker thinks B and A are the same. This is in effect to suggest that at least sometimes the referent is determined not through the cluster, but just through the causal connection embedded in the trace of the belief the speaker wishes to convey. I think Donnellan is wrong about this. We need clusters, and so no unambiguous reference takes place here at all.

20 For arguments to the conclusion that we very often lack identifying knowledge of objects we refer to and, a fortiori, have beliefs about, see Keith Donnellan, “Proper Names and Identifying Descriptions” and Saul Kripke, “Naming and Necessity.“

21 There is a wrong way to express what is impossible here, which makes it look like a false metaphysical thesis about Homer. Suppose the object of the beliefs we take to be about Homer was, by the belief-trace technique, found to be a third century B.C. Greek with no connection whatever with The /Iliad and The Odyssey. That peasant could not be the object of our belief, we want to say. And that is right. But it is false that Homer could not have been a third century Greek peasant for of course he could have been.

How Beliefs Find Their Objects