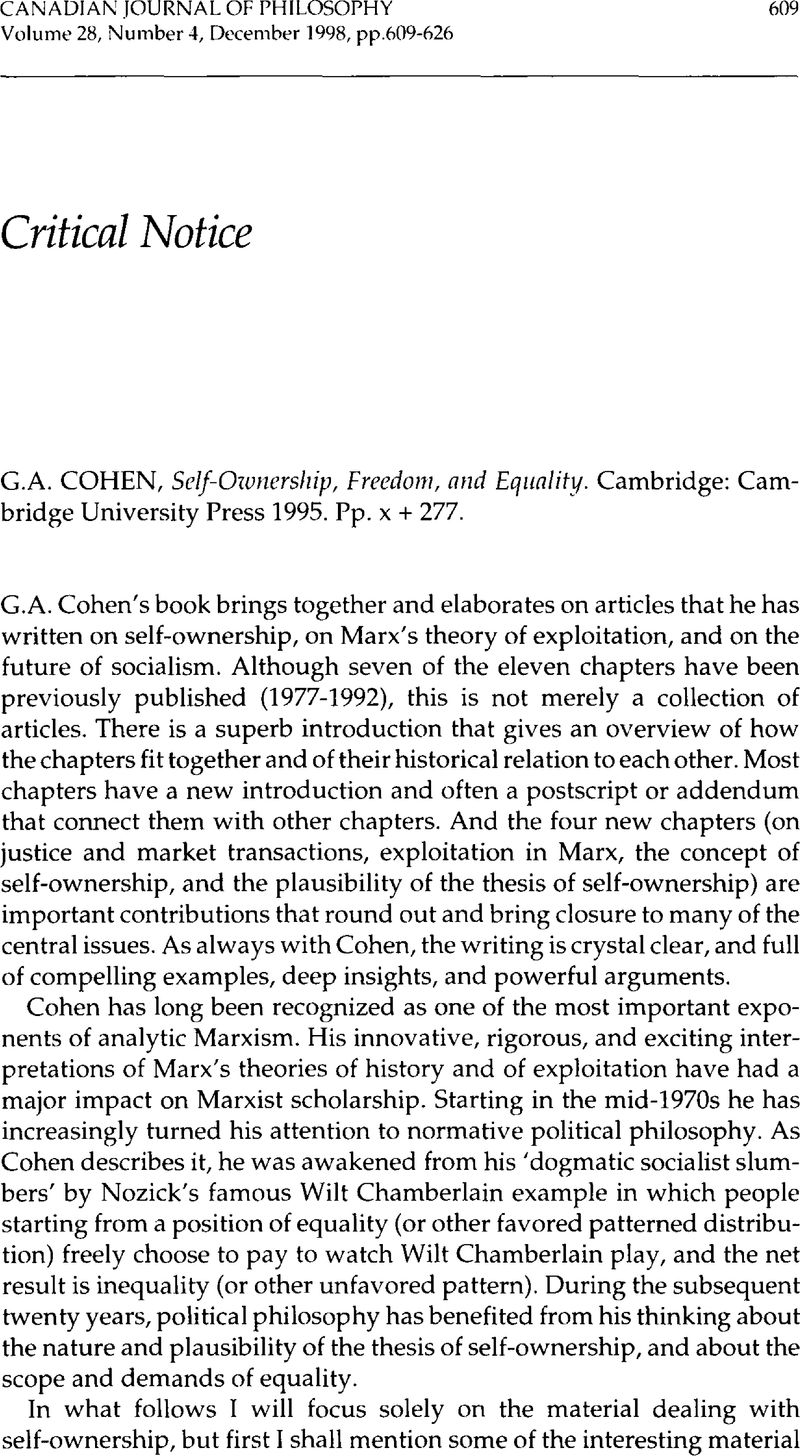 1 I skip over Cohen's discussion of defenses of self-ownership that appeal to the claims (1) that people are ends, or (2) that people should not be sacrificed without their consent for the benefit of others.

2 Cohen assumes, as is standard, that self-ownership, as applied to moral agents, includes ownership of one's entire body, but this does not follow from the thesis of self-ownership alone. It depends on facts about personal identity. If, for example, agents are purely mental beings that can, but need not, voluntarily occupy and leave bodies, then bodies (in their initial state) are simply (external) natural resources, just like tracts of land. And even assuming that agents are necessarily embodied, it does not follow automatically that the agents are identical with their entire bodies (as opposed to their central nervous system, say). Self-ownership for moral agents leads to ownership of all of their body parts only if they are identical with their entire bodies. If correct, this point supplements Cohen's criticism of the above argument for full self-ownership.

3 In the new Ch. 2 Cohen indirectly (and not explicitly) raises a criticism of the thesis of full self-ownership that I shall not consider. He there criticizes the principle that whatever arises from a just situation by just steps is itself just, where the justice of steps (or transactions) is conceived of procedurally (e.g., fully voluntarily) and not in terms of the ultimate outcomes. He thereby implicitly questions whether the justice of situations can be captured solely in terms of property rights. Explaining how this is relevant, and why I think the criticism fails (roughly: because his concerns are capturable within a property rights framework), would take me too far astray.

4 The best known contemporary advocate of the equal division of the natural resource rent is Steiner. Equal division is also advocated by Parijs, P. Van in Real Freedom for All (New York: Oxford University Press 1995), although it is qualified so that the social fund is divided equally only after compensation has been made for unchosen disadvantage. Grunebaum, J. in Private Ownership (New York: Routledge and Kegan Paul 1987), holds the natural resources are jointly owned, but holds that typically the most sensible decision is to rent out natural resources. If so rented, the rents are divided equally on his view. Dworkin, R. in ‘What is Equality? Part 2: Equality of Resources,’ Philosophy and Public Affairs 10 (1981) 283–345, develops an equal division approach, but only on the assumption that there is no differential brute luck. See also the discussion in Kolm, S.C.Le Contrat social liberal (Theorie et pratique du liberalisme) (Paris: Presses Universitaires de France 1985), ‘L'Allocation des ressources naturelles et le liberalisme,’ Revue economique 37 (1986) 207-41, Modern Theories of Justice (Cambridge, MA: The MIT Press 1996); and Roemer, J.Theories of Distributive Justice (Cambridge, MA: Harvard University Press 1996).

5 The control part of self-ownership is, roughly speaking (ignoring some differences), endorsed by Christman, J. in A Theory of Property (New York: Oxford University Press 1994), and (under the name ‘full act freedom’) by S.C. Kolm in Modern Theories of Justice. They both reject full self-ownership.

7 Two fairly plausible conditions on common use are: (1) no one should be made worse off in a (specified) relevant way compared with non-use (e.g., as when a scarce resource is damaged or destroyed); and (2) when more people want to use a given resource at a given time than can use it, each user must pay a fee equal to the competitive value of the use. These conditions are discussed below with respect to appropriation, but they could also be applied to use.

10 There are many extremely important issues that I am here glossing over. The competitive values of rights over resources are relative to a set of market conditions, and specifying and defending a particular set of conditions is crucial. Furthermore, even for a determinate set of initial conditions there can be more than one possible market equilibrium, and hence more than one possible set of competitive prices for resources.

12 The idea that the rent from natural resources should be first used to equalize advantage (as opposed to being equally divided) is endorsed by P. Van Parijs (Real Freedom for All); Sartorius, R. ‘Persons and Property,’ Utility and Rights Frey, R.G. ed. (Minneapolis: University of Minnesota Press 1984); and Brown, P. ‘Food as National Property,’ Food Policy, Brown, P. and Shue, H. eds. (New York: Free Press 1977).

13 In Ch. 9 (new) Cohen criticizes the claim by Gauthier, D.Morals by Agreement (London: Oxford University Press 1986), that self-ownership does not include the right to any income in excess of the minimum income necessary to induce one to supply a service or product. A similar criticism is made by Van Parijs (Real Freedom for All). As I note in the text, however, although full ownership of a service or product entitles the owner to the surplus income, this entitlement may be lost if one uses or appropriates resources that belong in part to others. Hence, taxation of surplus income is compatible with initial full self-ownership.

14 The following are some loosely related approaches to self-ownership and the ownership of natural resources: J. Christman (The Myth of Property) defends control self-ownership, but denies that agents (even non-appropriators) have any right to the income they generate. S. White, ‘Justice, Community, and the Inequality of Talents,’ British Journal of Political Science (forthcoming) accepts control self-ownership, but argues that agents owe taxes on their income at a rate (varying depending their talents) that equalizes post-tax potential income. M. Otsuka, ‘Deontology and Equality: A Lockean Reconciliation,’ unpublished (Dept. of Philosophy, UCLA) argues that agents are free to appropriate only as much resources as is compatible with equality of opportunity for welfare (and thus more talented agents are permitted to appropriate less). Brody, B. ‘Redistribution Without Egalitarianism,’ Social Philosophy and Policy 1 (1983) 71–87, argues that the benefits of appropriation may be taxed to ensure that everyone gets a mutually self-interested fair share of the benefits. Gibbard, A. ‘Natural Property Rights,’ Nous 10 (1976) 77–86, explores full self-ownership in conjunction with joint ownership of natural resources. This is like the joint ownership model considered by Cohen except that the non-agreement point is common use rather than non-use. This is a much more plausible model of joint ownership of natural resources, but it is still implausible because it requires the actual consent of others for just appropriation (it fails to be unilateralist). He also considers a hypothetical agreement model.

17 Work on this paper was funded in part by a fellowship grant from the American Council of Learned Societies. For comments and criticisms I'm indebted to the members of the discussion groups at Nuffield College, Oxford, and at The University of Manchester, Christian Arnsperger, Jerry Cohen, Tony Ellis, Brad Hooker, Shelly Kagan, Serge Kolm, Michael Lacewing, Trenton Merricks, Gene Mills, Arthur Ripstein, John Roemer, Hillel Steiner, Andrew Williams, and two anonymous referees for this journal.