The Expositor, the Censor, and the Common Law 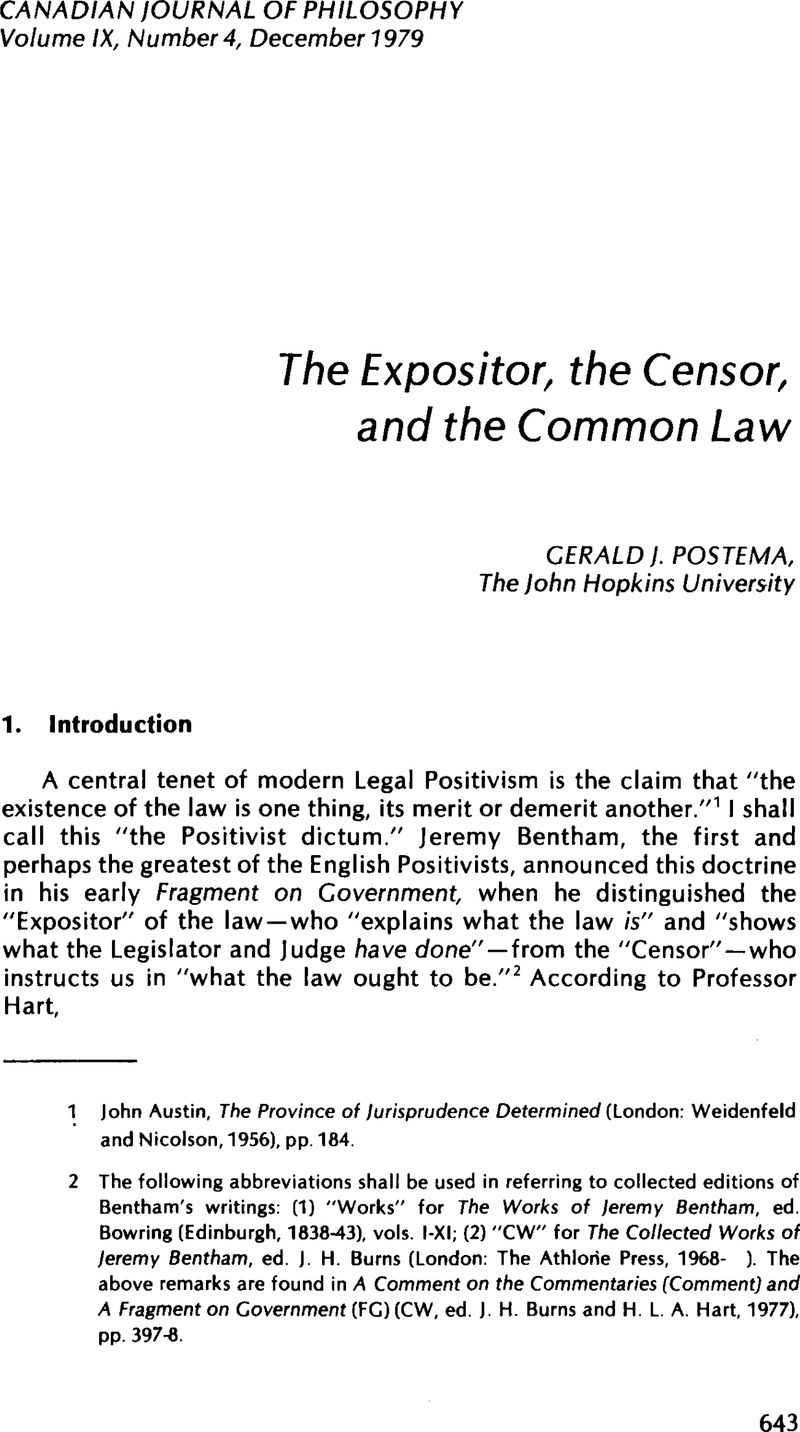 6 Beginning in the early 1170s. He entitled this work, in early stages, The Elements of Critical jurisprudence - a work which encompasses the material in the Introduction to the Principles of Morals and Legislation, Of Laws in General, and his treatises on “Indirect Legislation” and on “The Influence of Place and Time in Matters of Legislation.“

9 “But wherever it exists, lawyers will be its defenders, and, perhaps innocently, its admirers. They love the sourced of their power, of their reputation, of their fortune: the love unwritten law for the same reason that the Egyptian priest loved hieroglyphics, for the same reason that the priests of all religions have loved their peculiar d'ogmas and mysteries.” “General View of a Complete Code of Law,” Works, Ill, pp. 206. Bentham saw himself as the “Luther” of jurisprudence, see Works, VII, pp. 270n.

13 “The grant utility of the law is certainty: unwritten law does not - it cannot - possess this quality; the citizen can find no part of it, cannot take it for his guide; he is reduced to consultations - he assembles the lawyers - he collects as many opinions as his fortune will permit; and all this ruinous procedure often serves only to create new doubts.” “General View,” Works, Ill, pp. 206.

19 The importance of this was made clear to me after reading Long, Douglas G., Bentham on Liberty (Toronto: University of Toronto Press, 1977), especially pp. 88–90. I am indebted to this account for the material in the next paragraph.

23 Bentham embillishes the argument above when he argues in (the late) Pannomial Fragments” that a judge's particular orders are authoritative only if there is another command (or rule)” general in its extent and in such sort general as to include and give authority to this individual decree of his.” He then insists that in common law there is no such general authorizing law because a law is a command and there is no assignable commander of such a general authorizing command. works, Ill, pp. 223.

27 “A law is an expression of will: that is an assemblage of signs expressive of an act of the will. These signs then may by possibility be any signs whatever which are capable of expressing such a will: the behavior of him who instead of saying, put to death the chief leaders of the people, smote off the tallest heads among a parcel of poppies, might instead of being an advice, have been a command” (OLG, XIII, 1).

28 Here Bentham differs significantly from the Natural Law tradition at a point where a superficial view might have uncovered a convergence of views. According to St. Thomas, promulgation is a logically necessary condition of a principle of reason's being /aw (this holds even for “natural law” which is, according to Aquinas, “Written on the hearts of men“). See Summa Theo/ogica, lallae, QQ. 90a4, 91a2.

29 “Written law has a ceretain manifest foundation. There is a legislator-there is a will- there is an expression of that will, a known period of its birth. Unwritten law possesses none of those qualities: its origin is unknown; it goes on continually increasing - it can never be finished; it is continually altering, without observation.” “General View,” Works, Ill, pp. 206.

32 The following discussion draws on a more extensive investigation (in preparation) of Bentham's theory of fictions and his view of the nature and scope of the Principle of Utility. From this discussion it becomes clear that the dependence of Bentham's metaphysics and epistemology on his Utilitarianism is even more radical than I claim below. Although the evidence for Bentham's views on fictions offered below is drawn largely from his later writings (dating from 1813 to the mid-1820s), there is ample evidence that Bentham's researches into “metaphysics” date back to his earliest period (1770s). Bentham relies on these researches often in his works, but did not attempt to put them together systematically until late in his career. On Bentham's early researches on language and fictions see James Steintrager, Bentham (Ithaca: Cornell University Press, 1977) chapter 1, and long, Bentham on Liberty, chapter 4.

35 Bentham seems to be inconsistent on the status of laws. He is logically committed to the fictitious status of laws and actions, but he says in at least one place that both are real entities - in contrast with rights and obligations (OLG, App. C, 15). But he may be using “real” in an extended sense, as he does when he says at some points that qualities are “real” (i.e. more, or closer to, real). See Ogden, bentham's Theory of Fictions, pp. lx- xi.

37 Bentham even says, at the conclusion of his account of custom: “Now of the idea of customs thus generated is made up the idea of the Common law” (Comment, II, 4, pp.185).

38 “It is not too much to say that one sustaining motif throughout Bentham's long and complicated life was his conviction of the primacy of legislation and of his own mission as the philosopher-legislator.” Gertrude Himmelfarb, “Bentham Scholarship and the Bentham ‘Problem',” Journal of Modern History(1969), pp. 194. Bentham makes this very clear in the MS quoted by Mary Peter Mack, a Bentham Reader(New York: Pegasus, 1969), pp. xi.

41 Cf. Austin's notion of “General jurisprudence” in his “Uses of the Study of Jurisprudence,” in Province, pp. 367.

42 For the chapter references in the first sentence see OLG, pp. 233 editor's note 1, and the editor's introduction.

46 On the influence of Beccaria and Helvetius see Long, Bentham on Liberty, Chapter 2 (especially pp. 26-28), and references given there. Bentham reports that not only were the works eventuating in IPML, OLG, and other related tracts “built solely on the foundation of utility laid as it is by Helvetius” (letter to Voltaire, November, 1776), but also that it was through Helvetius that he discovered his “genius for legislation.” See Himmelfarb, “The Bentham Problem,” pp. 196-97.

51 The above arguments are based solely on the major published works of Bentham. Since completion of this article, I have had an opportunity to study much of the unpublished MS material at University College london. These MSS, especially some very important early ones, strongly confirm the reading developed in this article. I have taken account of this MSS material in a much expanded version of the above arguments which is part of a book-length study of Bentham's theories of law and adjudication now in preparation.

The Expositor, the Censor, and the Common Law