Ethical Intuitionism and Naturalism: A Reconciliation 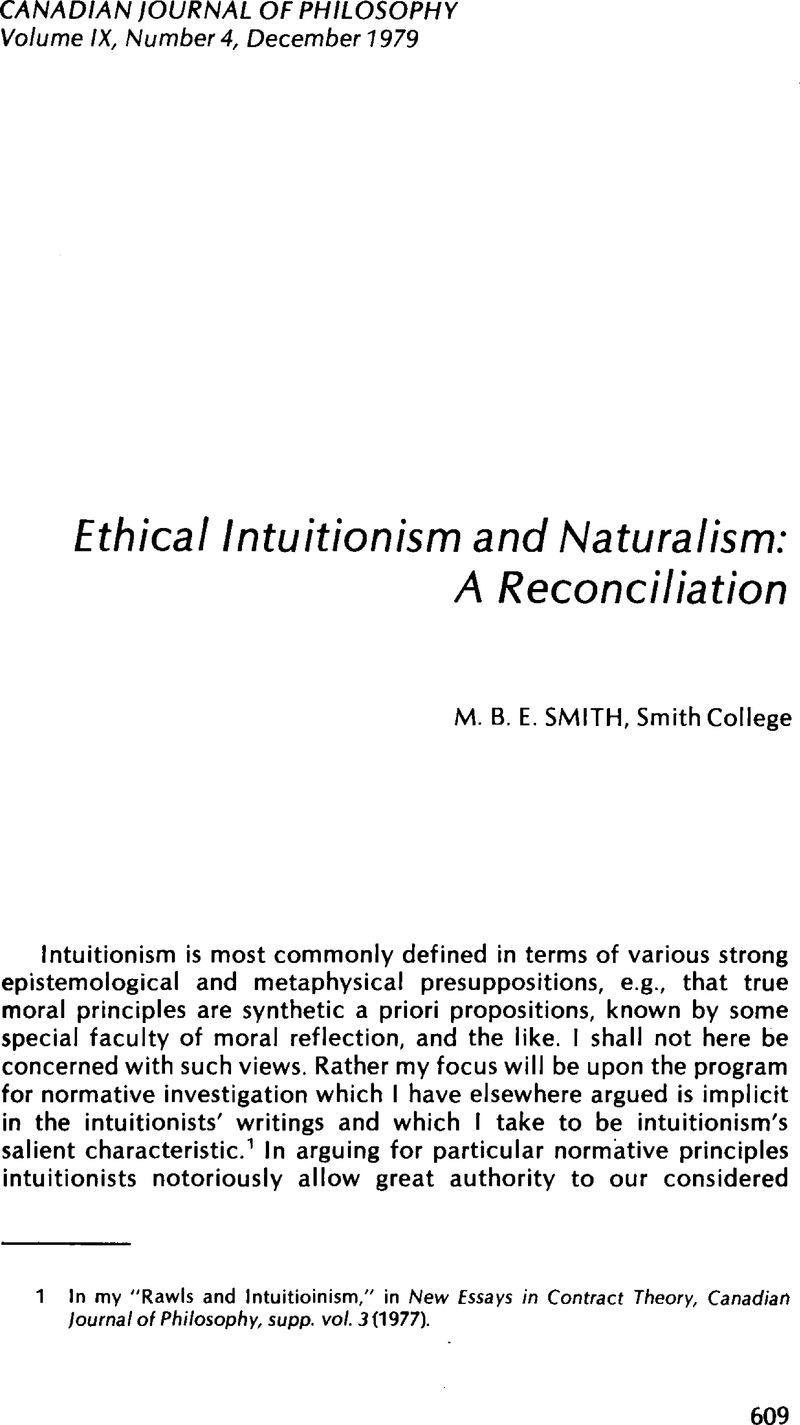 1 In my “Rawls and lntuitioinism,” in New Essays in Contract Theory, Canadian Journal of Philosophy, supp. val. 3(1977).

2 I borrow the notion of a considered judgment from John Rawls, who characterizes it as applying to judgments made in such circumstances that “the more common excuses and explanations for making a mistake do not obtain,” i.e., when we are confident in our opinion, when we are not emotionally upset, when our interests are not directly affected, and when we have a desire to reach a correct determination. See: Rawls's, JohnA Theory of Justice (Cambridge, Mass: 1971). pp. 47f.

3 For the suggestion that both Rawls's theory and intuitionism are subjectivist, see Hare, R. M., “Rawls’ Theory of Justice, 1,” Philosophical Quarterly 23 (1973), pp. 145f. S. Lukes suggests that Rawls's appeal to our considered judgments is invidiously parochial-and I suppose he would be willing to generalize the pointin his “Relativism: Cognitive and Moral,” Aristotelian Society supp. vol. 8 1974), esp. p. 184. See also: Nielsen, K., “Our Considered Judgements,” Ratio 19 (1977).

4 Many of Rawls's commentators have argued that his method fails to yield determinate principles of justice. I find particularly persuasive Gardner's, M. R.“Rawls on the Maximin Rule and Distributive Justice,” Philosophical Studies 27 (1975). I argue that it similarly fails to yield determinate principles of individual duty and obligation in my “Rawls and Intuitionism.” For discussion of Hare's method, see Locke, D., “The Trivializability of Universalizability,” Philosophical Review 77 1968).

5 I here assume that we have a pretheoretical ability to distinguish moral judgments from nonmoral ones and, hence, a pretheoretical ability to distinguish moral sentences from nonmoral ones. (Of course, a sentence may do double duty: on some occasions of its use it may express a moral judgment and on others a nonmoral one, as is shown by the hoary example of “In Sparta it was good to steal,” which may be used either to express one's own judgment about Spartan practices or simply to remark on the Spartan moral code.) Some may find this assumption problematical, but it seems to be an essential presupposition of any metaethical inquiry: were we to lack this pretheoretical ability we should have no way at all to distinguish the moral from the nonmoral, and so could never assess competing metaethical claims.

8 Chomsky, N., Aspects of the Theory of Syntax (Cambridge, Mass: 1965), chapter 1. See also: Katz, J.J., The Philosophy of Language (New York: 1966), pp. 115-18, and “A Proper Theory of Names,” op. cit., pp. 36f. I am aware that Chomsky's program is controversial, that some linguists and philosophers object to its appeal to linguistic intuitions. See esp.: Waldo, J., “Remarks on the Notion of Grammaticality,” in Stillings, J., ed., University of Massachusetts Occasional Papers in Linguistics, val. 2 (Amherst: 1976); and Labov, W., “Methodology” in Dingwall, W., A Survey of Linguistic Science (College Park: 1971). I can here but say that I find Chomsky's views more persuasive.

12 Such an understanding and criticism of Rawls may be found in Nagel, T., “Rawls on Justice,” Philosophical Review 82 (1973), p. 221, and in R. M. Hare, “Rawls’ Theory of Justice, 1,” op. cit., p. 148. But, although Rawls thinks moral theory is subject to methodological constraints identical to those which govern other theoretical enterprises, he nowhere recommends that moral theorists follow linguists’ methodology specifically; and he is certainly not to be read as espousing any sort of moral foundationalism. Rather his point in making the comparison was mainly to prepare his reader for the subtlety and complexity of his own theory. Anticipating that the ease and familiarity with which we arrive at moral judgment may lead some to suppose that the principles which underlie and explain them can be of no great complexity, he points out that we speak grammatically with analogous ease and familiarity, but that describing our sense of grammaticality is an exceedingly complicated business.

13 Hare, R. M., The Language of Morals (Oxford: 1951), esp. pp. 163-79. I here understand prescriptivism to encapsulate the view about moral acceptance or belief which is often called internalism, viz., that a person who accepts a moral judgment must have some favorable attitude towards the thing that the judgment is about-or, which is the same thing, that he must have some inclination to act in accordance with the judgment. Moreover, it holds that moral sentences have the pragmatic property of necessarily expressing the attitudes or commitments of those persons who sincerely assert or assent to them.

14 Nor need we suppose the speaker to have any feelings, which marks off our theory from a family of theories superficially resembling it, those which appeal to the reactions of an ideal observer.

15 For a critical discussion of prescriptivism, see my “Indifference and Moral Acceptance,” American Philosophical Quarterly 9 (1972), pp. 86–93.

20 For suggesting this point I am indebted to Elizabeth C. Scott, who was generally helpful throughout.

23 So far as I am aware, the independence of the question as to what entailment relations moral sentences stand in from that as to what their pragmatic properties might be has been appreciated only by P. Foot in her “Moral Arguments,” Mind, 68 (1958). She there conceded arguendo the truth of prescriptivism, and then suggested that no good argument has been produced to bar the deduction of evaluative conclusions from nonevaluative premises. For critical discussion of Foot's own naturalistic argument, see my “Foot and Hare on Naturalism.“

24 I believe, although I am not wholly certain, that Moore offers something like this argument in Principia Ethica (Oxford: 1903), p. 12. See also: R. M. Hare, “The Practical Relevance of Philosophy.”

Ethical Intuitionism and Naturalism: A Reconciliation