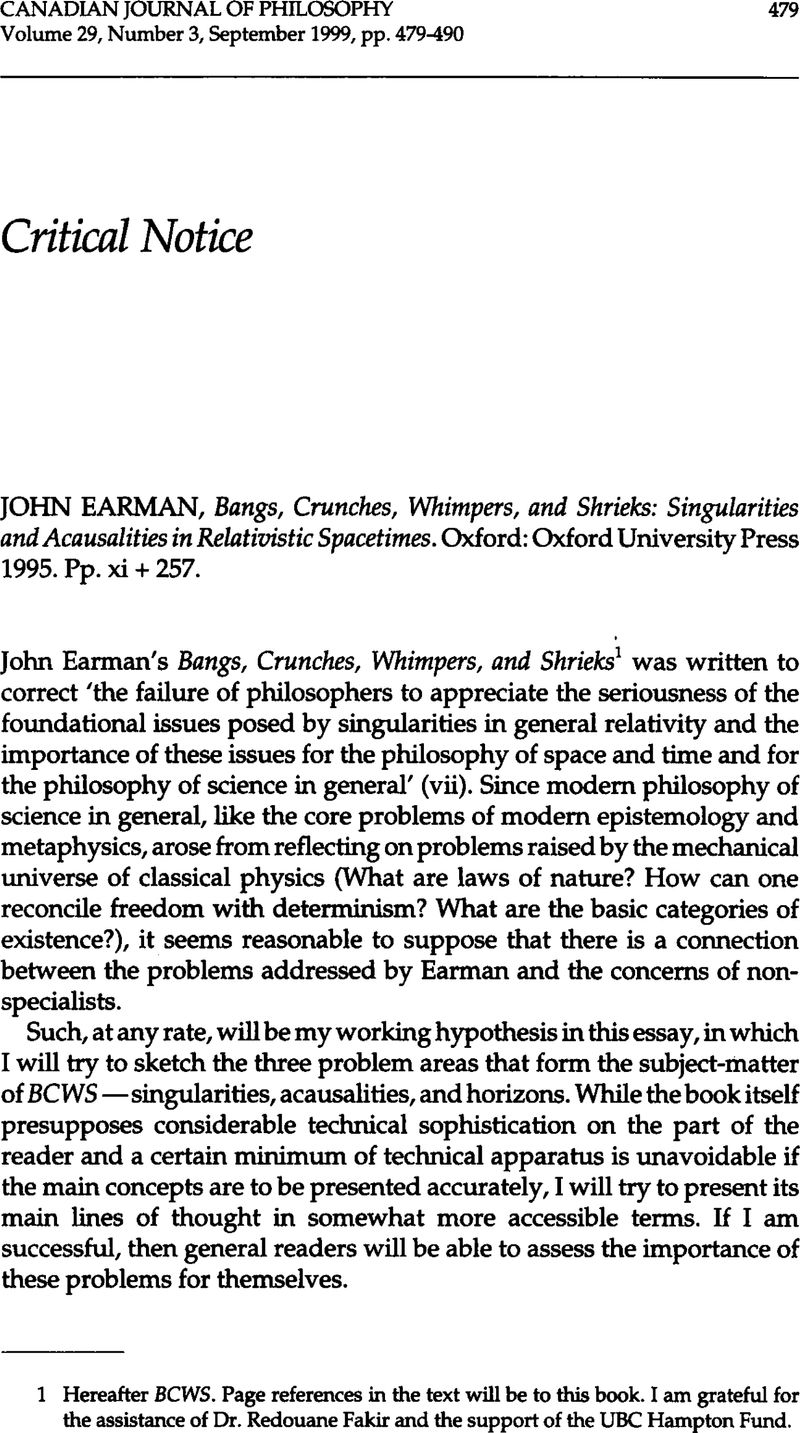 1 Hereafter BCWS. Page references in the text will be to this book. I am grateful for the assistance of Dr. Redouane Fakir and the support of the UBC Hampton Fund.

2 Earman notes that chapter 2 is ‘heavy going.’ Indeed, both it and chapter 3 have much of the character of review articles on singularities and cosmic censorship. Only specialists will feel the need to grapple with all the details therein. For most, the first two and the final sections of chapter 2, plus the final section of chapter 3, should provide enough grasp of the basic problems of characterizing singularities to enable them to profit from the other valuable discussions, like the chapter on time travel, in the remainder of BCWS.

4 Acausalities will be discussed in section ill below.

6 Less dramatically, the influence of a naked singularity can propagate to its future in ways that could undermine the predictive power of ordinary physics. But Earman argues that GTR has little predictive power anyway without the addition of highsounding (but poorly grounded?) principles. See 5.3.

8 The lore can be derived from, for example, the semi-popular essay ‘The Inflationary Universe’ by Guth, Alan and Steinhard, Paul in The New Physics, Davies, Paul ed. (Cambridge: Cambridge University Press 1989). Guth's, The Inflationary Universe: The Quest for a New Theory of Cosmic Origins (Reading, MA: Addison-Wesley 1997) is a readable and authoritative popular account of the discovery (or invention) of inflationary cosmology.

9 For instance, one strategy for deriving the time-asymmetric behavior of thermodynamic systems from the time-symmetric laws of statistical mechanics is to postulate special (low entropy) initial or boundary conditions for the universe.

11 Gödel's model is temporally orientable, and I shall assume an orientation for it.

12 Any spacetime in which a point p can be connected to itself by a continuous, future-directed, timelike curve is said to violate the chronology condition.

14 Indeed, Malament, David in “‘Time Travel” in the Godel Universe’ in PSA 1984: Proceedings of the 1984 Biennial Meeting of the Philosophy of Science Association, Asquith, P.O. and Kitcher, P. eds. (East Lansing, MI: Philosophy of Science Association 1985) 91–100, calculated the amount of fuel a rocket would need to traverse a CTC in a Gödel universe. His conclusion was that, even if the rocket had an ideally efficient engine, each 2 grams of payload would require 1012 grams of fuel.

15 Cf. Lewis's, David remarks on the different senses in which Tim can (and cannot) kill his grandfather in ‘The Paradoxes of Time Travel,’ which first appeared in American Philosophical Quarterly 13 (1976) 145-52, and is reprinted in his Philosophical Papers, Volume II (Oxford: Oxford University Press 1986).

18 I presented a valid argument for a conclusion somewhat weaker than Godel's, evidently intended conclusion in my paper ‘The Replacement of Time’ which appeared in The Australasian Journal of Philosophy 72 (1994) 463-74. Earman notes that our two arguments, though different, were developed when we were discussing these matters via e-mail and that there were reciprocal influences.