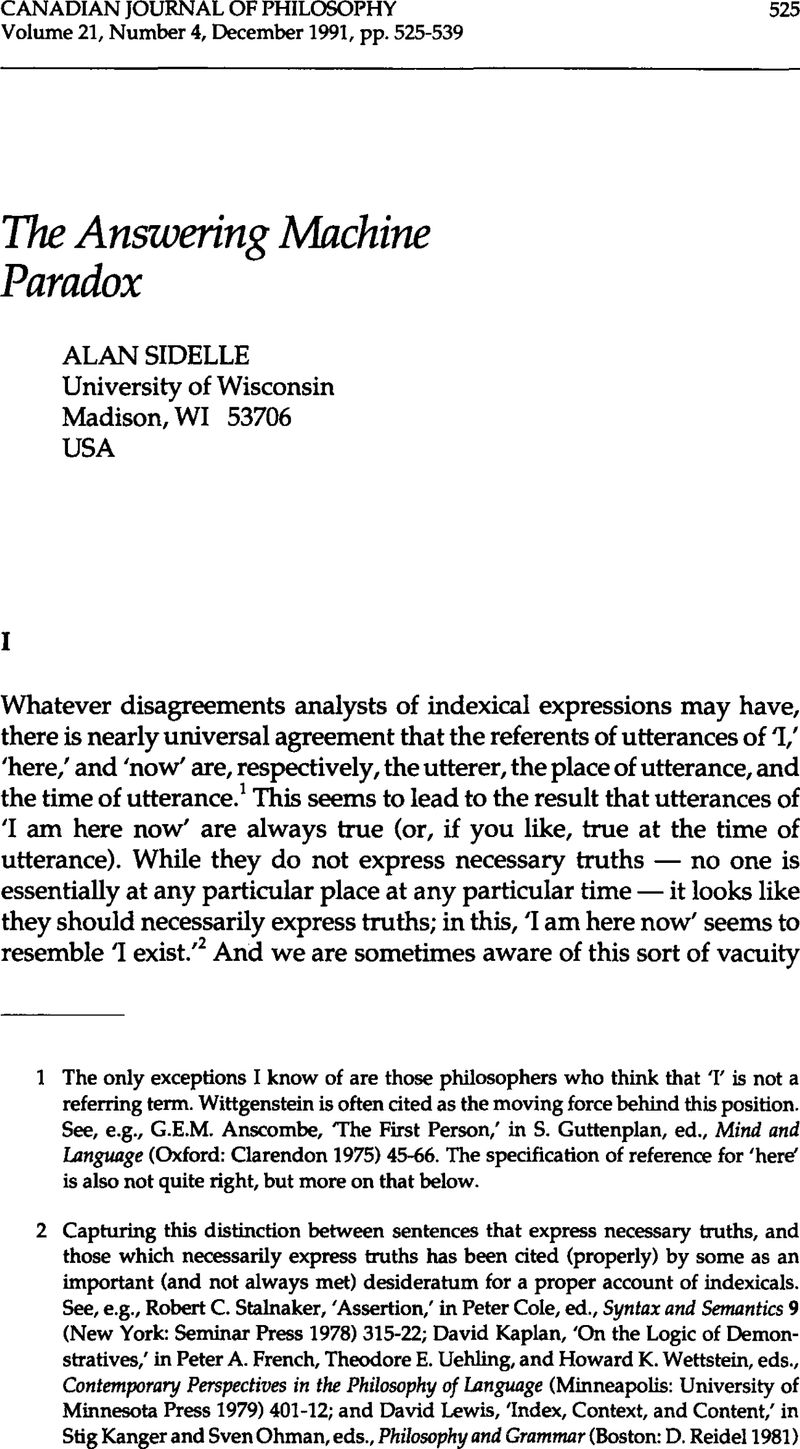 1 The only exceptions I know of are those philosophers who think that ‘I’ is not a referring term. Wittgenstein is often cited as the moving force behind this position. See, e.g., Anscombe, G.E.M. ‘The First Person,’ in Guttenplan, S. ed., Mind and Language (Oxford: Clarendon 1975) 45-66. The specification of reference for ‘here’ is also not quite right, but more on that below.

2 Capturing this distinction between sentences that express necessary truths, and those which necessarily express truths has been cited (properly) by some as an important (and not always met) desideratum for a proper account of indexicals. See, e.g., Stalnaker, Robert C. ‘Assertion,’ in Cole, Peter ed., Syntax and Semantics 9 (New York: Seminar Press 1978) 315-22;Kaplan, David ‘On the Logic of Demonstratives,’ in French, Peter A.Uehling, Theodore E. and Wettstein, Howard K. eds., Contemporary Perspectives in the Philosophy of Language (Minneapolis: University of Minnesota Press 1979) 401-12; and Lewis, David ‘Index, Context, and Content,’ in Kanger, Stig and Ohman, Sven eds., Philosophy and Grammar (Boston: D. Reidel 1981) 79-100. Only Kaplan explicitly mentions ‘I am here now,’ but Lewis’s reference to Kaplan suggests agreement on this case.

3 One may stick in qualifications if one likes, such as ‘in the context of a sentence (speech act).’ I will ignore these from here on.

4 Some may intuitively prefer the specification here to be the location of the speaker, rather than that of the utterance. The present formulation makes no substantive difference, but helps expositorily. So long as one thinks a speaker is always located at the place of his utterances at the time of the utterances (see [5] below), the formulations are at least co-extensional, so the difference shouldn’t matter for present purposes. If one thinks, however, that these may come apart (see 536, ff., below), there will be good reason to prefer the present formulation.

The formulation in (2) is actually not quite right; for instance, I may point to a spot on the floor and say ‘Jimmy was right here a second ago.’ ‘Here,’ then, actually picks out some location indicated by the speaker. However, in the absence of some explicit ostension, the ‘tacit’ ostension may be taken to be the location of the utterance. I will discuss this further below. We may also note that the spatial extention of the location can be anything from a particular spot to one’s entire universe (’What are we doing here?’), and need not have clear boundaries on any particular occasion.

5 Of course, we don’t really need ‘now’ to get the puzzle going; present indicative verbs carry with them an indication of the time of the utterance.

6 When ‘here’ can be substituted for ‘there’ will be a rather more subtle matter, investigation of which would tell us more precisely what the range of indica table locations is for ‘here.’ One might suppose that ‘here’ and ‘there’ carried, respectively, some implication of ‘near’ and ‘far,’ which are, of course, very flexible, with perhaps the only constraints built into the language being that the speaker’s location counts as near, and not far, and that what is far is further away than what is near. One could then try to explain interchangeability in terms of the flexibility of the standards for ‘near’ and ‘far.’ I have, however, some reluctance about this, since one can in the same breath use ‘there’ for the same or a closer location than one has just used ‘here’ for: a mover points to a spot near me and asks ‘Should I put the chair here?’ I reply, ‘No, not there’ (and I point to a slightly more distant spot), ‘here.’ Have I switched standards in mid-sentence? (If not, the analysis commits me to the claim that a ‘near’ spot may be farther away than a ‘far’ one.)

Aside from a perhaps implausible commitment to incredibly swiftly changing standards, this analysis also implies that ‘here’ and ‘there’ are not really substitutable for each other: they exclude each other, in the way that ‘bald’ and ‘not-bald’ do. While one can opt for either for a wide range of cases, one cannot shift to the other without changing standards: one cannot simultaneously use both. While this is right for ‘bald’ and ‘not-bald,’ for what it’s worth, one speaker’s intuitions (mine) are that the interchangeability of ‘here’ and ‘there’ runs deeper than this (that they do not exclude each other).

7 The difference, basically, concerns whether we should take uses of ‘here’ which refer to the speaker’s location to be just a special case of picking out an intended location, one in which we conventionally understand the speaker’s location to be indicated in the absence of something more explicit, or whether these uses of ‘here’ are more primitive and basic, and not just because of a conventionally agreed upon ‘default’ ostension. The importance of ‘self-placing’ indexical attitudes in the explanation of action may provide some support for the latter. See, e.g., Perry, John ‘The Problem of the Essential Indexical,’ NOUS 13 (1979) 3-21.

8 Okay, so we don’t need answering machines to generate the puzzle. But it’s easier to get worked up over them than little scraps of paper.

9 One might try to circumvent this by claiming that if one is actually making these utterances through his machine, then, by (5), it follows that the person is, appearances to the contrary, at home-or at least, partly at home- at the time of the call. This, though, threatens to make the utterance false. To make it come out true, one would need to explain it, I guess, in terms of one’s being mostly, or physically, not home. Even if one could come up with something that gave the right results here, it should be clear that it would at best be a notational variant of the present suggestion.

10 If one tries to get to the phone, but doesn’t make it before the message is played, the ‘I’m not here now’ would not, intuitively, be a lie. It would be more like a case of misspeaking.

11 I am indebted here to Ted Everett and Jim Maffie for their independent suggestion of this case.

12 There are other cases as well, perhaps even more convincing. If I place a bomb on a plane, I destroy the plane when the bomb explodes, though I may be thousands of miles away.

13 I don’t want to insist that one isn’t making an utterance at the time of the recording, only that one is at least also arranging to make a later utterance. (Perhaps this makes it better to say that one is not making an assertion.) And even if one isn’t typically making an utterance, in certain circumstances, saying ‘I’m not here now’ into the answering machine microphone might double as a standard utterance- someone calls up just as you are about to record your message, you answer the phone, and speak your message simultaneously into the receiver and the microphone.

14 The general theory of ‘action at a distance’ suggested here, as well as by the laundry case and others, is that (1) someone sets a causal process in motion, (2) the intended effects occur at some temporal distance, (3) the verb phrase used to express the action is given in terms of the effects, (4) the time of the action is considered to be the time of the effect, and (5) the location of the effect is not (relevantly near) the location of the original agent. (1)-(4) create the possibility of action at a distance, and (5) realizes it. In Word Meaning and Montague Grammar (Boston: D. Reidel 1979), David Dowty offers a general theory of sentences involving verbs of accomplishment (e.g. ‘Bill Qed’), according to which they are all to be analyzed as ‘P CAUSES (i.e. brings it about) Q,’ where ‘P’ and ‘Q’ are sentences, ‘P’ saying, roughly, that Bill did something, and ‘Q’ giving the state of affairs which needs to obtain for successful Q’ing (91ff.). It may, then, very generally be the case that conditions (1)-(3) are satisfied, although often the temporal distance given in (2) will not be large enough to allow (5) to hold. The extent of the possibilities for action at a distance, then, would rest largely on when (4) holds; Dowty would apparently like a unified account, but reflection on cases suggests that sometimes we take the time ofthe action to be the time of P, sometimes the time of Q, and sometimes the smallest interval which contains both P and Q (Dowty, 191-2, n. 17). Why there should be these differences is an interesting question, but one which goes beyond our present needs.

15 One might first suggest that the referent of ‘here’ should be the location of the speaker at the time of his deferring utterance. Counterexamples pop up soon, though. One may write ‘I’m not here now’ at the office, planning to drop it off on the kitchen table before one quickly scoots out for the evening; or, as I recently discovered, when one moves, ‘there is no need to change the message on one’s answering machine. In both of these cases, at the time of the deferred utterances, the referents of ‘here’ are the locations of the utterances, not of their initial inscriptions.

16 Even without the explicit indexical, this is dearly intended to be a deferred utterance, since one dearly isn’t at the store at the time of writing.

17 Note that it won’t do to say that it will be an utterance only if it is read while I’m at the store, for if I don’t go to the store at all, but instead go to play pool, I have presumably uttered a falsehood.

18 Apparently, there is a legal convention to the effect that the temporal index for wills is the time of death. But while this solves a practical problem, it seems clearly (to me, anyway) to be a semantic mistake (or at least might be, depending on the intentions and expectations of the deceased-to-be). It is also probably true that one can avoid such language in wills, so the problem need not arise. One can also avoid an ‘I’m not here’ message on one’s machine with more indexical-free language. But I hope it is plain that this is irrelevant. Our problems do not really arise because people do speak a certain way, but because they can, in perfectly acceptable English.

19 I am grateful to Thomas A. Blackson, David Brink, Ted Everett, and James Maffie for their willingness to discuss this topic with me, and for the valuable contributions they made while doing so. Thanks also to Carol Gabriel, for bringing David Dowty’s work on causatives to my attention (seen. 14), to an enterprising audience at North Carolina State University, and to a referee from this journal.