Practical Reason and the Status of Moral Obligation 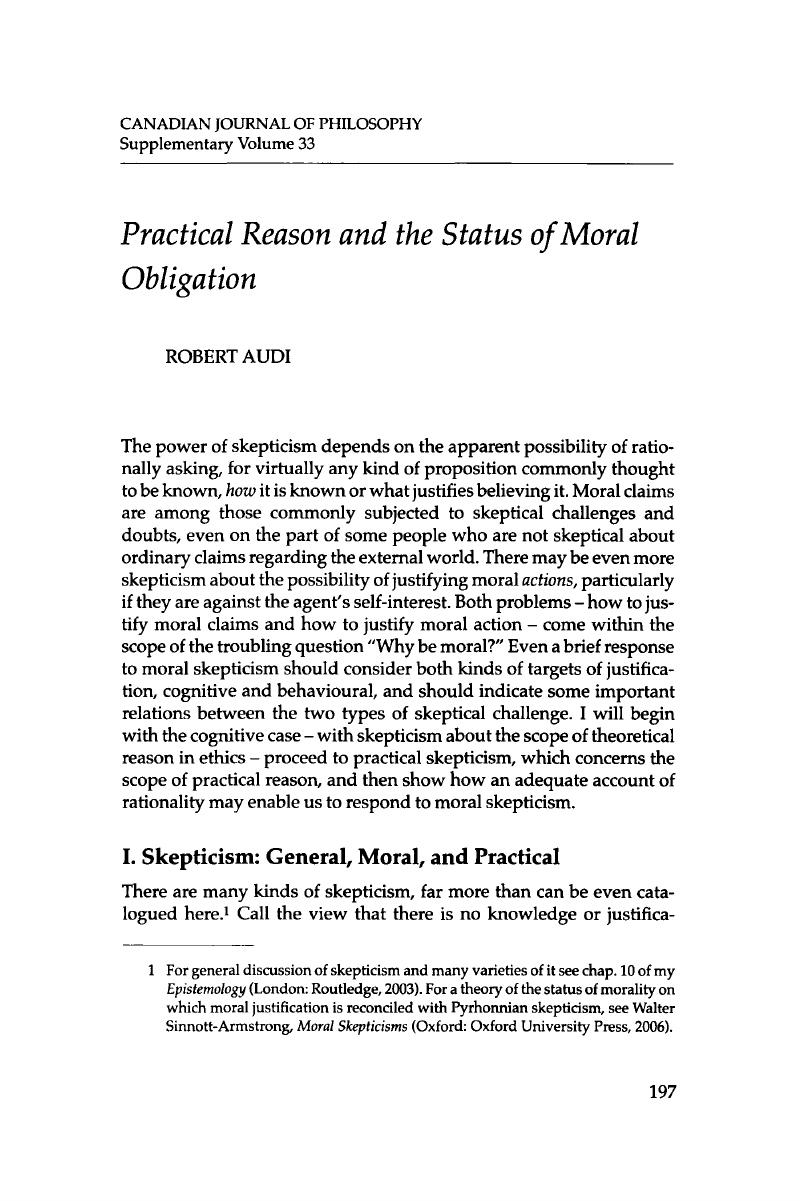 1 For general discussion of skepticism and many varieties of it see chap. 10 of my Epistemology (London: Routledge, 2003). For a theory of the status of morality on which moral justification is reconciled with Pyrhonnian skepticism, see Sinnott-Armstrong, WalterMoral Skepticisms (Oxford: Oxford University Press, 2006).

3 The phrase “to the effect that” is used to allow great breadth. Indeed, I want to leave open that even a rational de re instrumental belief might serve here.

5 In “The Grounds and Structure of Reasons for Action,” in Intentionality, Deliberation and Autonomy: The Action-Theoretic Basis of Practical Philosaphy, ed. Christoph Lumer and Sandro Nannini (Aldershott: Ashgate, 2007), 135-66.

6 The possibility of knowledge without internally accessible grounds is defended in chap. 8 of my Epistemology. The example does not mention justification, which seems less plausibly attributed on the indicated basis; but there are extemalist views on which it, like knowledge, would be implied by the kind of reliable connection in question.

7 If our basic reasons for action are grounded in qualities of experience, one might wonder whether there are any non-experiential sources of practical reasons. My view is that there are, though their normative force is essentially connected with experience. Consider the aesthetic value of a painting. This is not an experiential property of it, but it provides a non-instrumental reason to view the painting in virtue of the experiential value of, say, rewardingly contemplating it. I call such value as artworks or natural landscapes have inherent. A partial theory of inherent value is provided in my “Intrinsic Value and Reasons for Action,“ Southern Journal of Philosophy 41 Suppl. (2003): 30-56.

8 A recent commentator misses the subtlety of the main point here: “As Audi sees it, underlying his desire for him to experience a swim is a desire for there to be an experience of a swim.” See Jason Bridges’ review of The Architecture of Reason, Mind 116 (2007): 1083-1088 (at 1086). My view is that in the primitive case the desire is de re, e.g., wanting this pain to stop; it is not a de dicto desire that there be a cessation of this pain. The crucial distinction is between ascribing a property to something (here something experienced) and having a propositional attitude toward something identified in terms of some self-concept. To illustrate, I said “I can believe the man in the mirror to have a stain on his coat, without conceiving him as me,” even when he is (Architecture, 91). Bridges replies, “But if I believe that that man -the man I see in the mirror -has a stain on his coat, then I have a belief that predicates a property of a specific person” (1086). Bridges has assimilated a de re belief to a de dicto one and a person's predicating a property to a belief's doing so. In the latter case the subject must exercise the predicative concept -hence Bridges’ phrase within dashes. My view allows responses to properties that imply a disposition to form such predicative beliefs but do not entail their formation. The view also allows for responses to the properties ascribed even before development of the concepts of those properties. In the primitive hedonic cases I cited, an elemental rational response to experiencing painful qualities does not require conceiving them as one's own. But of course we are “wired” so that, once we have the appropriate concepts, we are disposed to believe they are ours.

9 I here construe “being obligated” as a variable-place predicate. Being obligated not to falsify records is a monadic property -the reference to records specifies its content but does not entail that there are any records; being obligated to you to A is representable as a dyadic relation between us. What of being obligated to someone to return a book? Perhaps this might be represented as either a triadic relation or a dyadic one with external content referring to the book. In any case, the notion of consequentiality may be applied to purely qualitative relational properties, such as one person's being obligated to another (which I take to be a universal). Where a relation is between particulars, we may speak of it as a fact (the fact that the first bears it to the second) and the relation may be grounded in another relation.

10 The same holds for normative properties, but my main focus here is on the moral subset of those. I should add that I am taking natural properties to be simply “descriptive” and so am allowing mental properties even if they are not reducible to physical ones.

11 For a criticism of the idea that there is a moral obligation of self-improvement, see Gert's, Bernard “Two Conceptions of Morality,” in Rationality and the Good: Critical Essays on the Ethics and Epistemology of Robert Audi, ed. Timmons, MarkGreco, John and Mele, Alfred R. (Oxford: Oxford University Press, 2007), 54–63.

12 The relation of a basis for Rossian principles to those principles and the implications of the derivability of the principles from a set of propositions constituting a basis for them is discussed at length in my third chapter (“Kantian Intuitionism“) in The Good in the Right (Princeton: Princeton University Press, 2004).

14 This beneficence problem is treated in detail in The Good in the Right, chap. 3 and esp. chap. 4.

15 The problem here is again to explain why morality is not too demanding. This difficult problem is treated in part in Architecture, e.g., chap. 6, and in The Good in the Right, esp. chap. 4.

16 Two qualifications are needed here: (1) there may be an exception for cases of basic action, e.g., moving a finger, where desire alone seems sufficient. I am also leaving open whether certain de re beliefs might do the relevant instrumental work. But these fine points of action theory need not be pursued here. (2) One might argue that merely true instrumental belief is sufficient for a good reason, even if irrational. Nothing in this paper will turn on that issue or certain other controversies about what counts as a good reason. All parties agree that it is rationally preferable for the relevant instrumental belief to be rational and for one to have grounds for rationally holding it rather than merely a disposition to hold it on non-rationalizing grounds.

17 My “Self-Evidence,” Philosophical Perspectives (1999) contains a more detailed account of self-evidence than The Good in the Right, and some extensions of both treatments are made in my “Skepticism about the A Priori: Self-Evidence, Defeasibility, and Cogito Propositions,” in The Oxford Handbook of Skepticism, ed. John Greco (Oxford: Oxford University Press, 2008), 149-75. The term “fully” may be preferable to “adequately,” provided one does not take it to imply maximality.

18 How there can be rational disagreement on the self-evident is dealt with in my “Rational Disagreement as a Challenge to Practical Ethics and Moral Theory,” in Epistemology: New Essays, ed. Quentin Smith (Oxford: Oxford University Press, 2008), 225-47.

19 The relativity in question is compatible with a full-bloodedly rationalist moral epistemology and theory of action. Cf. the claim of Lionel K. McPherson that his “account of moral normativity is nonrationalist: (1) “it denies that all rational persons as such have reason to do what morality requires; (2) it denies that moral motivation can derive solely from a rational person's acknowledgment of moral reasons.” See “Normativity and the Rejection of Rationalism,” Journal of Philosophy 104 (2007): 55-70 (at 67﹜. There is no reason why a rationalist should deny that what we have reason to do depends on our experience or insist that rationality as such requires having -as opposed to their being -reasons to act morally. This is argued in detail in chap. 7 of Architecture (with much of whose account of rationality, however, McPherson's views are compatible). Regarding (2), a rationalist can be a belief-desire theorist concerning the motivation and explanation of action. McPherson, like others, is perhaps attributing to rationalism the rejection of this view found in, e.g., Thomas Nagel's The Possibility of Altruism (Oxford: Oxford University Press, 1967), but rationalism does not entail rejecting it nor is one committed to rejecting it by denying Humean instrumentalism about practical reason.

20 A detailed discussion of motivational internalism and externalism is provided, and a moderate externalism is defended, in my “Moral Judgment and Reasons for Action,” in my Moral Knowledge and Ethical Character (Oxford: Oxford University Press, 1997), 217-47.

21 These points on reasonableness are largely drawn from my Architecture, chap. 6 Cf. the discussions of it by Rawls, JohnPolitical Liberalism (New York: Columbia University Press, 1993); and Scanlon, T. M.What We Owe to Each Other (Cambridge: Harvard University Press, 1998).

22 That in special cases weak-willed action may be rational, though it tends to count against rationality, is argued in detail in my “Weakness of Will and Rational Action,” Australasian Journal of Philosophy 68 (1990): 270-81.

23 That acting morally is never irrational has been long held by Gert, Bernard e.g., in Morality: Its Nature and Justification (Oxford: Oxford University Press, 1998), and is also held by Parfit, On What Matters.

24 I leave open what constitutes adhering to a moral obligation in this context. The point made here can accommodate the view that it requires true belief, the position that justified belief is enough, and even the view that mere belief is enough. There are limits to how much error moral persons can make about their obligations, but some of what needs to be said on this matter concerns the theory of excusability.

25 For an account and defence of the kind of reasonable compromise between egoistic and altruistic considerations that morality represents, see Sterba, James P. “Completing the Kantian Project: From Rationality to Equality,” Proceedings and Addresses of the American Philosophical Association 82 (2008): 47–83.

26 William K. Frankena distinguishes motivational and normative sense of “should“ in his short instructive discussion of “Why should I be moral?” in his Ethics, 2nd Edition (Englewood Cliffs, NJ: Prentice-Hall, 1973), 113-14. See also his Thinking about Morality (Ann Arbor: University of Michigan Press, 1980).

27 Earlier versions of this paper were presented at Dartmouth College, Simon Fraser University, and the Center for Ethics and Culture at Notre Dame. I benefited from vigorous discussion on those occasions, and for helpful comments I particularly want to thank Bernard Gert, Walter Sinnott-Armstrong, James Sterba, Evan Tiffany, and, especially, Sam Black, whose comments were rigorous and detailed.

Practical Reason and the Status of Moral Obligation