Pseudo-Chemical Meningitis and the Malignant Transformation of an Epidermoid Cyst

A 67-year-old woman presented to the emergency department with a 4-month history of progressive dysarthria and ataxia. On physical examination, she was found to have saccadic eye movements and postural instability while sitting. Initial imaging showed a cystic lesion of the right cerebellopontine angle consistent with an epidermoid cyst but with two atypical imaging findings (Figure 1 A–D): peripheral enhancement of the lesion and diffuse leptomeningeal enhancement. Two days after admission, she suffered several focal to bilateral tonic-clonic epileptic seizures with postictal aphasia and right-sided hemiparesis. Phenytoin (later replaced by levetiracetam) and dexamethasone were given. She was intubated and mechanically ventilated in order to protect her airway and placed on a continuous infusion of propofol. The treating team initially postulated that the patient’s seizures and leptomeningeal enhancement were due to a chemical meningitis from spontaneous rupture of the epidermoid cyst. The neurosurgical team was consulted and it was decided to resect the lesion. In the days preceding the surgery, the patient’s mental status declined and her clinical evaluation was suggestive of brainstem dysfunction. 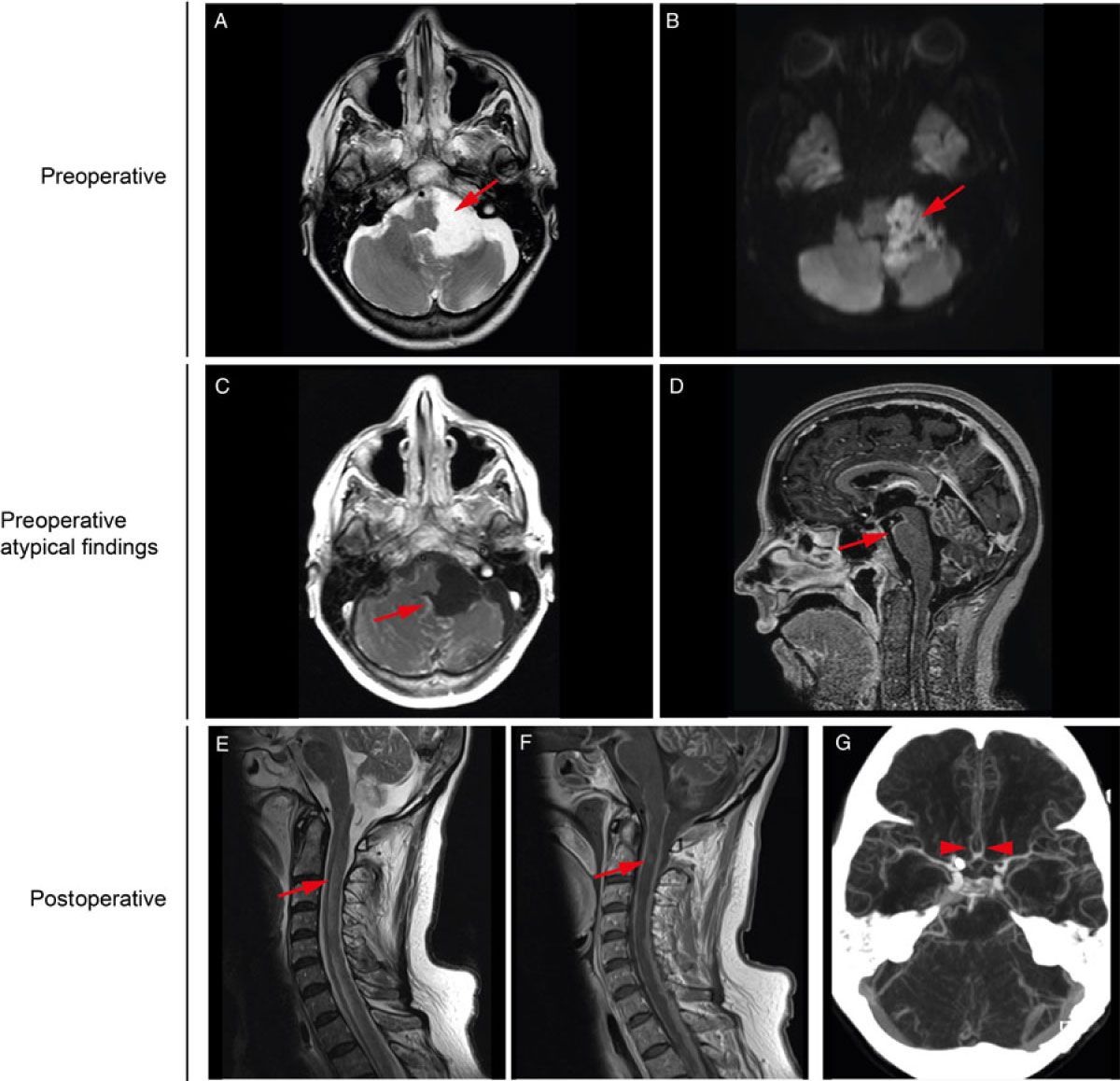 The patient’s condition was expected to improve after surgery given the usually transient neurological deficits associated with chemical meningitis secondary to the rupture of an epidermoid cyst.Reference Berger and Wilson 1 Contrary to this prediction, her postoperative neurological condition further deteriorated with severe encephalopathy, as well as worsening CSF pleocytosis and elevated protein levels. The aetiology of the unremitting encephalopathy was initially unclear. On postoperative brain MRI, the leptomeningeal enhancement remained extensive. Of particular note, in retrospect, the leptomeningeal enhancement seen on the postoperative brain MRI was nodular, which would be atypical for a chemical meningitis. Cervical spine imaging revealed spinal cord oedema, and CT angiography showed multifocal intracranial arterial narrowing likely secondary to an inflammatory leptomeningeal process (Figure 1 E–G). Histological analysis of the resected lesion highlighted focal areas of malignant transformation into squamous cell carcinoma (Figure 2). Perioperative CSF cytology eventually revealed similar findings. 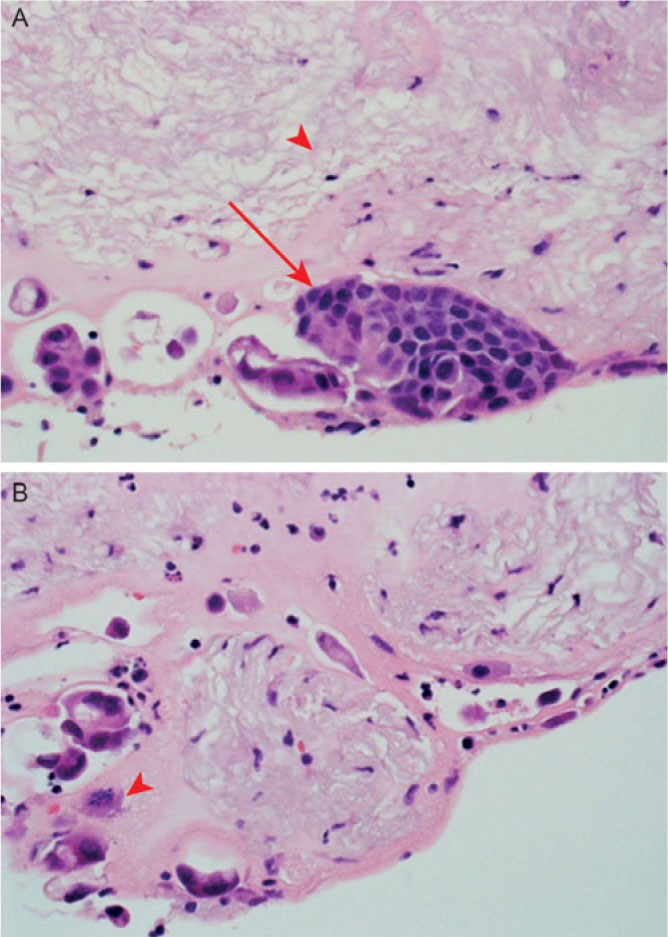 It was ultimately concluded that the preoperative malignant transformation of the epidermoid cyst eventually resulted in dissemination of squamous cell carcinoma and the development of leptomeningeal carcinomatosis, mimicking a chemical meningitis.

A chemotherapy regimen of vinorelbine and cisplatin was initiated but was deemed ineffective. She was transferred to a palliative care unit where she passed away.

Intracranial epidermoid cysts are benign congenital lesions resulting from ectodermal tissue that is embryologically misplaced during neural tube closure. Their growth, mediated by the accumulation of keratin and cholesterol, typically occurs within the cisternal space. They can often grow for many years before causing symptoms, which are generally related to local mass effect.Reference Chowdhury, Haque and Sarker2 Epidermoid cysts rarely rupture and seldom degenerate into squamous cell carcinoma.Reference Nagasawa, Choy and Spasic3 It has been suggested that chronic inflammation, related to small but repeated cystic ruptures or subtotal surgical resections, predisposes to the development of carcinoma in the cyst’s epithelial lining.Reference Hamlat, Zhi-Fen and Saikali4 Leptomeningeal metastases of squamous cell carcinoma are rare as compared to adenocarcinomas.Reference Ren, Huang and Shah5 The proposed modes of spread include direct extension from dural or parenchymal tumours; perineural spread, especially for head and neck squamous cell carcinomas; and haematogenous dissemination. Once the malignant cells reach the leptomeninges, they can use the CSF as a route to implant themselves throughout the central nervous system. Investigators have suggested that the CSF acts as a sanctuary site for malignant cells, shielding them from immune surveillance.Reference Singh, Bakhshinyan and Venugopal6

Approximately 60 cases of malignant transformation of an epidermoid cyst are reported, most arising from remnants of partially resected tumours.Reference Nagasawa, Choy and Spasic3 Hamlat et al. proposed four criteria that should alert the clinician to possible malignant transformation of an epidermoid cyst. These criteria are (1) a person whose postoperative recovery is less optimal than otherwise expected; (2) a person with worsening symptoms in the absence of hydrocephalus; (3) a person with rapid tumour recurrence or growth; or (4) a person in whom preoperative brain imaging reveals enhancement of the cyst.Reference Hamlat, Zhi-Fen and Saikali4

The prognosis after malignant transformation of an epidermoid cyst is poor (mean survival = 11.8 months) and worsens with the occurrence of leptomeningeal carcinomatosis (9.2 months). Multimodal treatment combining surgery and adjuvant therapy offers the best survival (36.3 months).Reference Nagasawa, Choy and Spasic3

We present the case of a patient with an intracranial epidermoid cyst and pathologically confirmed malignant transformation into squamous cell carcinoma. The novelty of the presentation is the preoperative occurrence of leptomeningeal carcinomatosis. This was confirmed by the clinical deterioration in the absence of hydrocephalus, the worsening CSF pleocytosis and protein levels, as well as the preoperative and persistent leptomeningeal enhancement on brain MRI. Clinicians should bear this possibility in mind when confronted with a suspected chemical meningitis in a patient with an epidermoid cyst. We additionally submit the anecdotal proposal that nodular leptomeningeal enhancement may be an early radiographic sign of leptomeningeal carcinomatosis in this context. Such a finding is atypical of an aseptic or bacterial meningitis and is more suggestive of a neoplastic process.Reference Smirniotopoulos, Murphy and Rushing7

The authors would like to thank all the consultants and hospital staff that helped in the management of this case.

SD: acquisition of data, drafting the manuscript and the figures.

SO: acquisition of the data, critical revision of the manuscript and figures.

LL: acquisition of the data, expertise input, and critical revision of the manuscript.

MC: expertise input and critical revision of the manuscript.

KB: expertise input and critical revision of the manuscript.

FB: acquisition of the data, expertise input, and critical revision of the manuscript.

MB: expertise input and critical revision of the manuscript.

MRK reports speaker and advisory fees for Eisai, Elsevier, Sunovion, Novartis, Sage Therapeutics, and UCB, unrestricted educational grants from UCB, and research grants from UCB and Eisai. The other authors have no conflicts of interest to declare.