A 77-year-old Japanese woman developed gait disturbance during her 50s. The gait disturbance and a muscle weakness in her lower limbs gradually worsened, and she consulted our hospital at the age of 76. Neurological examination showed proximal-dominant muscle weakness and atrophy, particularly in the quadriceps muscles. In her left hand, the muscle strength during finger flexion at the distal interphalangeal joint was lower than that at the proximal interphalangeal joint and metacarpophalangeal joint. Needle electromyography showed low-amplitude and short-duration unit potentials and early recruitment of the muscles examined. MRI of the forearm showed hyperintensities in the flexor digitorum profundus (FDP) muscle on T1- and T2-weighted images; these hyperintensities relatively spared the muscles of the extensor forearm region and flexor digitorum superficialis (FDS) muscle (Figure 1A, B). MRI of the thigh showed hyperintensities in the quadriceps muscles on T1- and T2-weighted images; these hyperintensities relatively spared the muscles of the posterior compartment of the thigh (Figure 1C, D). A biopsy of the right biceps muscle was performed. Hematoxylin-eosin staining showed muscle fibers of various sizes, small and angulated fibers, necrotic and regenerating fibers, and inflammatory cell infiltration. Muscle fibers with vacuoles rimmed by basophilic granules, which stained red with modified Gomori-trichrome staining, were frequently observed (Figure 1E, F), consistent with the diagnosis of inclusion body myositis (IBM). 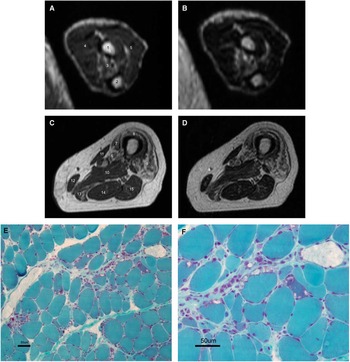 In patients with IBM, muscle weakness begins insidiously and muscle atrophy selectively and characteristically involves primarily the quadriceps femoris and tibialis anterior muscles in the lower limbs, and the finger flexor muscles in the upper limbs. In the forearm, the FDP muscle is affected more severely than the FDS muscle. Hokkoku et al. reported that electromyographic examination of the FDP muscle was useful for diagnosing IBM and could reduce the misdiagnosis of IBM for ALS.Reference Hokkoku, Sonoo and Higashihara 1

The most common abnormal MRI finding in IBM is atrophy of the quadriceps femoris muscles with fat infiltration.Reference Phillips, Cala and Thickbroom 2 Although the most unique clinical feature of this condition is a marked discrepancy in strength between the FDP and FDS muscles, with the FDP muscle being much weaker and the FDS muscle strength being well preserved, there have been only a few reports on MRI of the forearm in patients with IBM.Reference Sekul, Chow and Dalakas 3 , Reference Cox, Reijnierse and van Rijswijk 4 Diagnosis based on MRI abnormal findings in both the quadriceps muscles and the FDP muscle may improve the diagnostic level of IBM.