Canadian Neurosurgery lost one of its stalwarts with the passing of Dr. James Frederick Ross Fleming, MD, MSc, FRCSC, FACS, on December 1, 2013. 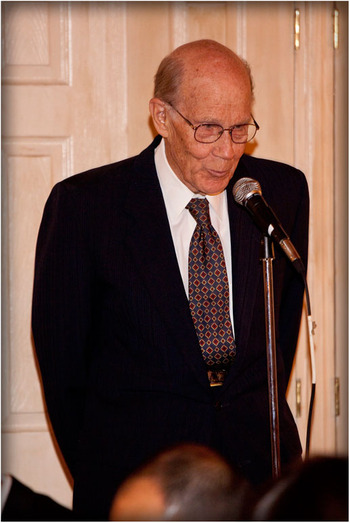 Ross Fleming was born in Toronto, Ontario in 1925. He graduated from medical school at the University of Toronto in 1947. With the encouragement and under the tutelage of Dr. Harry Botterell, then Chief of Neurosurgery, Ross decided to join the neurosurgery training program in Toronto and completed his residency in 1956. During his residency, he received additional training in neuroanatomy at the University of Michigan, Ann Arbor and in neurology at Queen Square, London and Radcliffe Infirmary, Oxford. In 1953, Ross was awarded the George-Armstrong Peters Prize by the University of Toronto in recognition of a young investigator with outstanding productivity in research, publication and training. At the time of his graduation, neurosurgical programs had been established at an increasing number of centres. Ross received several recruitment offers in Canada and the United States, but preferred to remain in Toronto with his wife Patricia, who he had recently married and with whom he would have four children and ten grandchildren. Not wanting to move from Toronto or her family, the next stage of his neurosurgical career was set when he received “an excellent offer at the Toronto Western Hospital, which I happily accepted.” Ross joined the neurosurgical staff at Toronto Western Hospital in 1956, and he assumed the role of Division Head of Neurosurgery there from 1965 until 1984. Ross retired from neurosurgical practice in 1997, after a long and distinguished career as a leader in all aspects of our profession.

Ross was a skilled and committed neurosurgeon, known for his profound care for his patients. He was a wonderful mentor and role model to the neurosurgical faculty and residents. He was also a patient and dedicated teacher—a master at teaching the technique of neurological examination. To recognize his outstanding role and contributions as a teacher, the Ross Fleming Surgical Educator Award, given yearly to an active surgeon at University Health Network for excellence in undergraduate, postgraduate or continuing medical education, was established in 1992. Ross stressed the importance of surgeons being involved in undergraduate teaching. He served as Associate Dean of the Faculty of Medicine at the University of Toronto, impacting very positively on the life of many medical students. In 1990 the Neurosurgical Intensive Care Unit at the Toronto Hospital was renamed the Fleming Neurosurgical Intensive Care Unit in his honor.

During his career, Ross served in senior roles at the provincial, national and international levels. He served as Chairman of the Ontario Medical Association, Sections of Neurology and Neurosurgery (1969). He received the Award of Exceptional and Distinguished Service from the Congress of Neurological Surgeons (CNS) in 1975 and served as President of the Canadian Neurosurgical Society from 1978-1979. He received a Certificate of Distinguished Service from the American Association of Neurological Surgeons (AANS) in 1982. He sat on the Board of Directors of the AANS from 1979-1982 as well as on the Executive Committees of the CNS from 1969-1973 and the World Federation of Neurosurgical Societies (WFNS) from 1982-1989.

To his trainees and more recently to our current residents and young Faculty, he stressed two practices that had always been of fundamental importance to him. The first was “Listening to their patients, he/she is telling you the diagnosis. (Osler) If a patient or medical report provides a diagnosis, question it. Start by believing it to be incorrect, then take steps to prove it right or wrong. Always, always ask questions.” The second was to “Always think creatively, look afresh at what you have always taken for granted. Hang a question mark on the things you have normally taken for granted. (Bertrand Russell) It takes time and patience, but is absolutely fundamental to all clinical encounters. It is best to sit down beside the patient, even if briefly, and look at him/her and listen attentively, rather than standing, looking down and being perceived as being in a hurry. This maneuver will pay huge dividends to the outcome. Imaging and other diagnostic facilities are not a substitute for good conversations with patients and their families.”

Ross very much enjoyed participating in the events and symposia held in conjunction with the celebration of 90 years of Neurosurgery at the University of Toronto in October of 2013. When asked on this occasion to consider some of the most important advances in our discipline, he identified eight major developments that had occurred since the time of his residency training:

As a man talented in many areas—Ross was an avid canoeist, hiker, skier, naturalist, outdoorsman and angler, an accomplished musician and music lover—he might easily have followed a different career path in his youth. In very recent reflections, he credited his decision to pursue a career in neurosurgery to the “outstanding mentorship”, “very enthusiastic teaching and encouragement”, and “personal interest” he received from Drs. Kenneth McKenzie and Harry Botterell and senior resident Dr. Eben Alexander during a junior intern rotation in his medical studies. Ross would go on to reciprocate these qualities tirelessly and selflessly over the next four decades, devoting his entire career to the education of undergraduate and graduate trainees in medicine and neurosurgery. Our discipline has been made better by him, and he will be deeply missed as an exemplary role model for those who train the next generation of neurosurgeon-scientists and surgical educators.