Even though the diagnosis of schwannoma is usually straightforward in lesions with classic features, tumors with predominantly epithelioid morphology or marked myxoid change may present a diagnostic challenge. There are relatively few reported cases of epithelioid schwannoma entirely lacking classic morphology, and these have occurred in subcutaneous tissues, mucosal surfaces, or as gastrointestinal polyps. Within the spinal cord, caution must be taken to avoid misclassification of this entity as a mesenchymal neoplasm or malignant peripheral nerve sheath tumor, more commonly present with epithelioid morphology.

The patient, a 50-year-old Caucasian woman, presented with low back pain of 5 months’ duration, associated with bilateral leg pain, numbness, and weakness. Magnetic resonance imaging (MRI) revealed enlargement of a known thoracic spine tumor, which had been present for approximately 6 years. The patient had previously declined surgery because of other medical concerns; however, her symptoms had worsened. MRI now demonstrated a large, right-sided, dumbbell-shaped tumor, eroding the T6 vertebral body and extending into the neural foramen (Figure 1). The patient underwent a gross total resection. The surgical specimen was composed of pale pink, gelatinous mucoid material (Figure 2) with associated cartilage and bone. Frozen section interpretation favored a chondroid lesion with a differential diagnosis, including chordoma and myxoid chondrosarcoma (Figure 2). 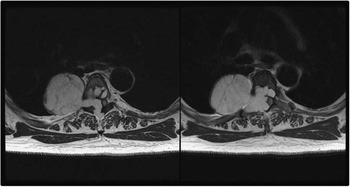 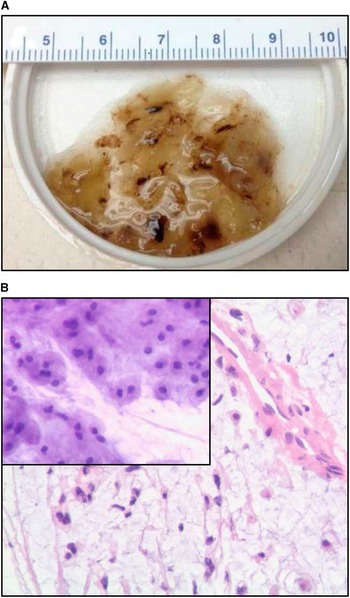 On microscopic examination of the paraffin sections (Figure 3), the lesion demonstrated a proliferation of epithelioid cells in an abundant myxoid background with focal spindled cell morphology. Rare, thick-walled vessels were identified throughout the lesion and focal dense fibrous tissue, suggesting a fibrous capsule was present in some blocks. Mitotic figures were difficult to find, and no tumor necrosis was identified. No chondroid matrix production was appreciated. 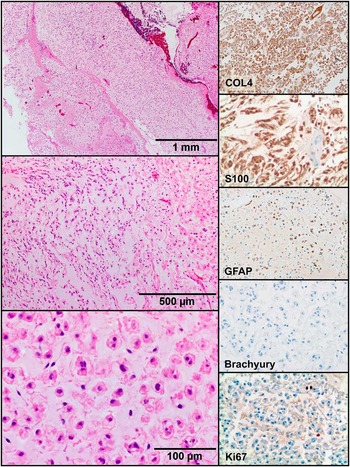 Immunohistochemical stains were performed for S100, glial fibrillary acidic protein (GFAP), collagen 4 (COL4), cytokeratin (AE1/AE3, Cam5.2), epithelial membrane antigen (EMA), brachyury, HMB45, Melan A, FLI-1, and CD31. The neoplastic cells demonstrated strong nuclear and cytoplasmic expression of S100 and membranous expression of COL4 (Figure 3). Some cells appeared focally and weakly positive for GFAP. Although the histologic appearance of the lesion and S100 staining raised the possibility of chordoma, the neoplastic cells were negative for cytokeratins (AE1/AE3, Cam5.2), EMA, and brachyury as well as for HMB45, Melan A, FLI-1, and CD31.

To further characterize this lesion, electron microscopy was performed from tissue initially fixed in formalin and subsequently fixed in glutaraldehyde. The lesion demonstrated characteristic features of Schwann cell differentiation, including a continuous basement membrane, formation of mesaxons, and extracellular long-spacing collagen (Figure 4). These overall features were consistent with epithelioid schwannoma. The patient made an uneventful recovery, with resolution of her symptoms, and is disease free at 1-year follow-up. 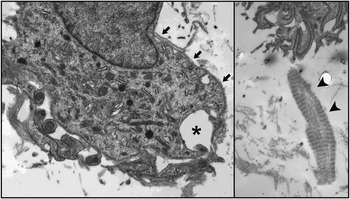 Epithelioid schwannomas present a diagnostic challenge because these lesions lack the typical Antoni A and B growth patterns of conventional schwannoma. However, they share a characteristic immunohistochemical staining profile that includes strong expression of S100 protein, membranous expression of COL4, and variable expression of other Schwann cell markers, including GFAP. The spinal location and abundant myxoid matrix in this case presented a particular diagnostic challenge and a broad differential diagnosis that included chordoma and other chondromyxoid lesions, such as a chondrosarcoma with myxoid change and extraskeletal myxoid chondrosarcoma. In contrast to chordoma, epithelioid schwannomas do not express cytokeratins, EMA, or brachyury. Even though chondrosarcoma may harbor myxoid change, areas of chondroid matrix can typically be found. Additionally, the radiologic appearance of both chordoma and chondrosarcoma would be that of a primary bone neoplasm. Extraskeletal myxoid chondrosarcoma is a distinct mesenchymal neoplasm composed of epithelioid cells arranged in cords in a myxoid background, but usually lacks the strong and diffuse S100 immunoreactivity of schwannomas. Additionally, these neoplasms are characterized by recurrent chromosomal translocations, most commonly a balanced translocation of the EWSR1 gene at 22q12 with the NR4A3 gene (alias NOR1) at 9q22, which is present in approximately 75% of cases. 3 Finally, ultrastructural features of Schwann cell differentiation, including a continuous basement membrane, long-spacing collagen, and formation of mesoaxons, are helpful to exclude other neoplasms when the diagnosis is in doubt.

Epithelioid morphology has been more commonly reported in malignant peripheral nerve sheath tumors (MPNST) than in their benign counterparts. In some cases, the distinction between epithelioid MPNST and epithelioid schwannoma may be challenging, and well-defined criteria are lacking. A recent series of 63 epithelioid MPNSTs suggested that the presence of diffuse nuclear atypia and pleomorphism, vesicular nuclei, atypical mitotic figures, or necrosis favor a diagnosis of epithelioid MPNST. 4 Epithelioid MPNSTs also typically had an elevated mitotic rate, with a median of 5/10 per high-powered field (range, 1-46/10). 4

Because schwannoma of the spinal cord/spinal nerve roots is common, epithelioid schwannoma may be an underrecognized entity in this location. This lesion may mimic malignant mesenchymal tumors, and its correct identification is essential.

RV, HC, KF, PCAA, and MJ do not have anything to disclose.