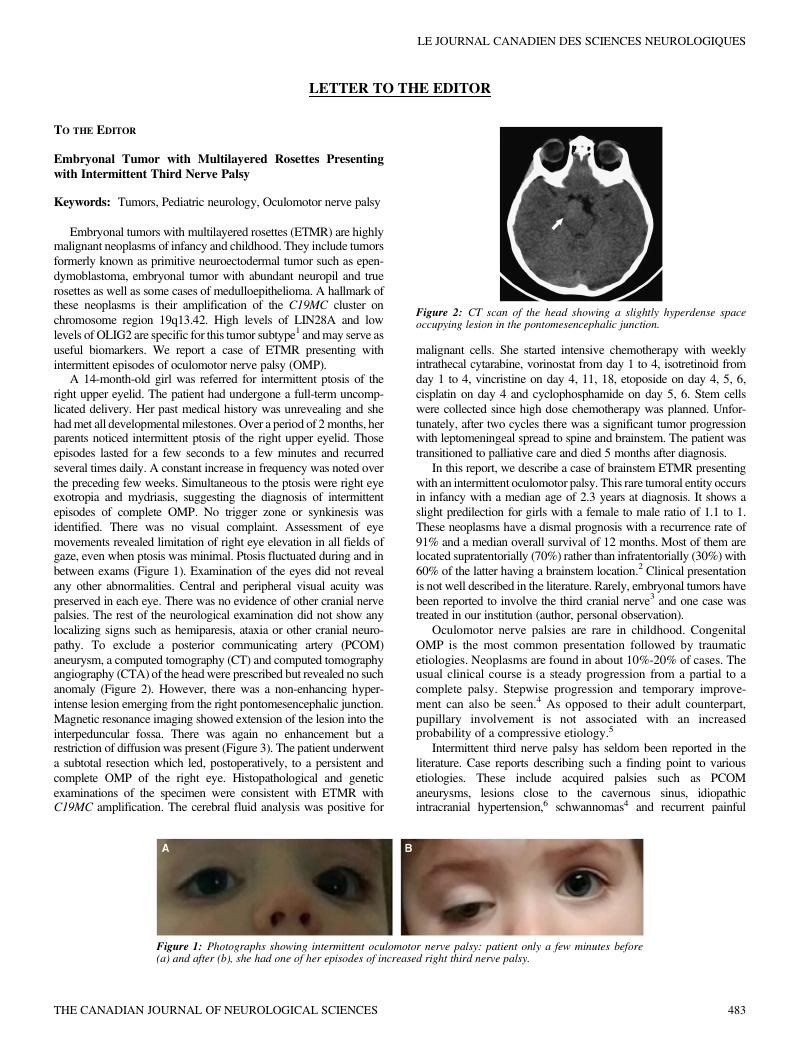 Embryonal tumors with multilayered rosettes (ETMR) are highly malignant neoplasms of infancy and childhood. They include tumors formerly known as primitive neuroectodermal tumor such as ependymoblastoma, embryonal tumor with abundant neuropil and true rosettes as well as some cases of medulloepithelioma. A hallmark of these neoplasms is their amplification of the C19MC cluster on chromosome region 19q13.42. High levels of LIN28A and low levels of OLIG2 are specific for this tumor subtypeReference Ceccom, Bourdeaut and Loukh 1 and may serve as useful biomarkers. We report a case of ETMR presenting with intermittent episodes of oculomotor nerve palsy (OMP).

A 14-month-old girl was referred for intermittent ptosis of the right upper eyelid. The patient had undergone a full-term uncomplicated delivery. Her past medical history was unrevealing and she had met all developmental milestones. Over a period of 2 months, her parents noticed intermittent ptosis of the right upper eyelid. Those episodes lasted for a few seconds to a few minutes and recurred several times daily. A constant increase in frequency was noted over the preceding few weeks. Simultaneous to the ptosis were right eye exotropia and mydriasis, suggesting the diagnosis of intermittent episodes of complete OMP. No trigger zone or synkinesis was identified. There was no visual complaint. Assessment of eye movements revealed limitation of right eye elevation in all fields of gaze, even when ptosis was minimal. Ptosis fluctuated during and in between exams (Figure 1). Examination of the eyes did not reveal any other abnormalities. Central and peripheral visual acuity was preserved in each eye. There was no evidence of other cranial nerve palsies. The rest of the neurological examination did not show any localizing signs such as hemiparesis, ataxia or other cranial neuropathy. To exclude a posterior communicating artery (PCOM) aneurysm, a computed tomography (CT) and computed tomography angiography (CTA) of the head were prescribed but revealed no such anomaly (Figure 2). However, there was a non-enhancing hyperintense lesion emerging from the right pontomesencephalic junction. Magnetic resonance imaging showed extension of the lesion into the interpeduncular fossa. There was again no enhancement but a restriction of diffusion was present (Figure 3). The patient underwent a subtotal resection which led, postoperatively, to a persistent and complete OMP of the right eye. Histopathological and genetic examinations of the specimen were consistent with ETMR with C19MC amplification. The cerebral fluid analysis was positive for malignant cells. She started intensive chemotherapy with weekly intrathecal cytarabine, vorinostat from day 1 to 4, isotretinoid from day 1 to 4, vincristine on day 4, 11, 18, etoposide on day 4, 5, 6, cisplatin on day 4 and cyclophosphamide on day 5, 6. Stem cells were collected since high dose chemotherapy was planned. Unfortunately, after two cycles there was a significant tumor progression with leptomeningeal spread to spine and brainstem. The patient was transitioned to palliative care and died 5 months after diagnosis.

Figure 1 Photographs showing intermittent oculomotor nerve palsy: patient only a few minutes before (a) and after (b), she had one of her episodes of increased right third nerve palsy. 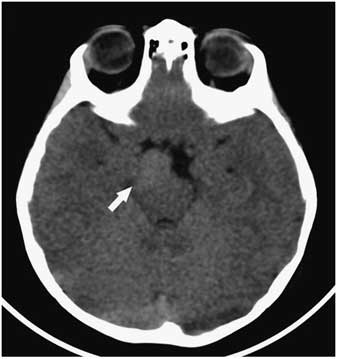 In this report, we describe a case of brainstem ETMR presenting with an intermittent oculomotor palsy. This rare tumoral entity occurs in infancy with a median age of 2.3 years at diagnosis. It shows a slight predilection for girls with a female to male ratio of 1.1 to 1. These neoplasms have a dismal prognosis with a recurrence rate of 91% and a median overall survival of 12 months. Most of them are located supratentorially (70%) rather than infratentorially (30%) with 60% of the latter having a brainstem location.Reference Korshunov, Ryzhova and Hovestadt 2 Clinical presentation is not well described in the literature. Rarely, embryonal tumors have been reported to involve the third cranial nerveReference Ferri Niguez, Martínez-Lage and Almagro 3 and one case was treated in our institution (author, personal observation).

Oculomotor nerve palsies are rare in childhood. Congenital OMP is the most common presentation followed by traumatic etiologies. Neoplasms are found in about 10%-20% of cases. The usual clinical course is a steady progression from a partial to a complete palsy. Stepwise progression and temporary improvement can also be seen.Reference Shin, Mejico and Kawasaki 4 As opposed to their adult counterpart, pupillary involvement is not associated with an increased probability of a compressive etiology.Reference Lyons, Godoy and ALQahtani 5

Figure 3 MRI of the pontomesencephalic junction showing the space occupying lesion measuring: 1.5×2×2 cm in each plane and extending into the interpeduncular fossa. It is isointense to the cerebral cortex in the T2 sequence (A) and has marked restriction diffusion as can be seen by the hyperintense DWI (C) and hypointense ADC map (D). There is no contrast enhancement (B). There is no significant mass effect.

Intermittent third nerve palsy has seldom been reported in the literature. Case reports describing such a finding point to various etiologies. These include acquired palsies such as PCOM aneurysms, lesions close to the cavernous sinus, idiopathic intracranial hypertension,Reference Azran, Waljee and Biousse 6 schwannomasReference Shin, Mejico and Kawasaki 4 and recurrent painful ophthalmologic neuropathy.Reference Kim, Kim and Kim 7 The fluctuating symptomatology of these conditions lasted from days to years. We found only one other case with episodic third nerve palsy lasting a few minutes and it was related to a cryptococcal meningitis in an adult patient. No case related to a tumor has been reported in the pediatric population.Reference Azran, Waljee and Biousse 6

This case highlights the fact that a brainstem tumor can cause intermittent OMP, drawing attention to the importance of conducting early neuroimaging.