A 42 year-old-man, with history of Eisenmenger’s syndrome presented to the Emergency Department (ED) with headache and bilateral hand paresthesia. The patient’s hematocrit was noted to be 75.3% and the hemoglobin was 24.7 g/dl.

A non-enhanced brain computed tomogram (CT) showed hyperdense venous sinuses and cortical veins. A region of interest (ROI) placed in the superior sagittal sinus measured 65 Hounsfield Unit (HU) (Figure 1) and the Hounsfield unit-to-hematocrit ratio (H:H ratio) was 0.86. The patient had a history of an anaphylactic reaction to iodinated contrast agent, thus a magnetic resonance imaging scan (MRI) with contrast was performed to rule out cerebral venous thrombosis (CVT). Contrast-enhanced MRI venography (Figure 2) did not show filling defects in the dural venous sinuses nor in the major vessels of the deep cerebral venous system. 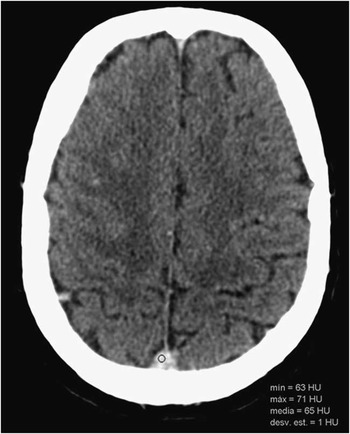 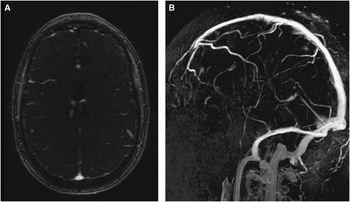 Figure 2 Axial image from contrast-enhanced MRI venography (A) and 3D reformation (B) showed no filling defects in the superior sagittal sinus or in the major vessels of the deep cerebral venous system.

“Hemoconcentration” or elevated levels of hemoglobin or hematocrit increase x-ray attenuation within the brain vasculatureReference Black, Rad, Gray, Campeau and Kallmes 1 . Features of polycythemia on non-enhanced brain CT scan includes increased attenuation of the dural venous sinuses and cortical and deep cerebral veins and may simulate an acute CVT. Cerebral venous thrombosis is a known complication of polycythemia and hence they may coexist. Recently, Garetier et al.Reference Garetier, Rousset and Pearson 2 re-evaluated the value of spontaneous hyperdensity in the venous sinus on non-contrast CT and reported a cut-off value of 70 HU to distinguish between normal sinuses and CVT.

In addition to the absolute density measurement, Black et al Reference Black, Rad, Gray, Campeau and Kallmes 1 recently introduced the H:H ratio as a normalized index blood attenuation with regard to hemoconcentration. They reported a mean H:H ratio of 2.20 and 1.44 in patients with and without CVT, respectively.

Buyck et al.Reference Buyck, De Keyzer, Vanneste, Wilms, Thijs and Demaerel 3 proposed the routine calculation of the H:H ratio to increase the sensitivity of non-contrast CT of the brain in the diagnosis of CVT. Their results showed an optimal threshold of 1.52, leading to a sensitivity of 95%, specificity of 100%, and accuracy of 97.5%.

In our case, the superior sagittal sinus had a mean density of 65 HU and a H:H ratio of 0.86. According to aforementioned values, the patient had a very low likelihood of CVT, as confirmed by MRI.Reference Leach, Wolujewicz and Strub 4

As a summary, in patients with polycythemia and neurological symptoms, CT or MRI venography may be necessary to definitively rule out CVT. However, the use of absolute density measurements in the venous sinus and, more specially, the calculation of the H:H ratio, may be helpful in the imaging work-up of the patient with clinical suspicion of CVT in the ED setting, particularly in patients with polycythemia.

Alexandre Perez-Girbes, Pierre Lemercier, and Carlos Leiva-Salinas do not have anything to disclose.