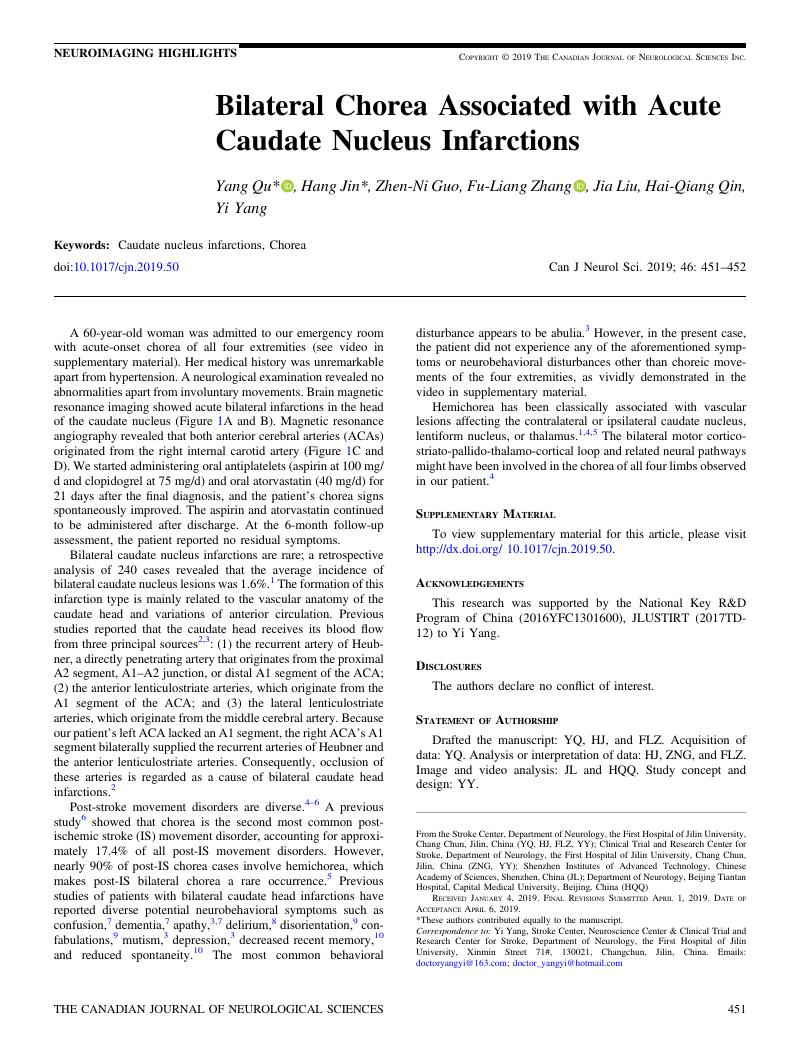 A 60-year-old woman was admitted to our emergency room with acute-onset chorea of all four extremities (see video in supplementary material). Her medical history was unremarkable apart from hypertension. A neurological examination revealed no abnormalities apart from involuntary movements. Brain magnetic resonance imaging showed acute bilateral infarctions in the head of the caudate nucleus (Figure 1A and B). Magnetic resonance angiography revealed that both anterior cerebral arteries (ACAs) originated from the right internal carotid artery (Figure 1C and D). We started administering oral antiplatelets (aspirin at 100 mg/d and clopidogrel at 75 mg/d) and oral atorvastatin (40 mg/d) for 21 days after the final diagnosis, and the patient’s chorea signs spontaneously improved. The aspirin and atorvastatin continued to be administered after discharge. At the 6-month follow-up assessment, the patient reported no residual symptoms.

Bilateral caudate nucleus infarctions are rare; a retrospective analysis of 240 cases revealed that the average incidence of bilateral caudate nucleus lesions was 1.6%.Reference Bhatia and Marsden1 The formation of this infarction type is mainly related to the vascular anatomy of the caudate head and variations of anterior circulation. Previous studies reported that the caudate head receives its blood flow from three principal sourcesReference Kumral, Evyapan and Balkir2, Reference Fukuoka, Osawa, Ohe, Deguchi, Maeshima and Tanahashi3: (1) the recurrent artery of Heubner, a directly penetrating artery that originates from the proximal A2 segment, A1–A2 junction, or distal A1 segment of the ACA; (2) the anterior lenticulostriate arteries, which originate from the A1 segment of the ACA; and (3) the lateral lenticulostriate arteries, which originate from the middle cerebral artery. Because our patient’s left ACA lacked an A1 segment, the right ACA’s A1 segment bilaterally supplied the recurrent arteries of Heubner and the anterior lenticulostriate arteries. Consequently, occlusion of these arteries is regarded as a cause of bilateral caudate head infarctions.Reference Kumral, Evyapan and Balkir2

Hemichorea has been classically associated with vascular lesions affecting the contralateral or ipsilateral caudate nucleus, lentiform nucleus, or thalamus.Reference Bhatia and Marsden1, Reference Mehanna and Jankovic4, Reference Caproni and Colosimo5 The bilateral motor cortico-striato-pallido-thalamo-cortical loop and related neural pathways might have been involved in the chorea of all four limbs observed in our patient.Reference Mehanna and Jankovic4

These authors contributed equally to the manuscript.