A 21-year-old man with X-linked adrenoleukodystrophy (X-ALD) suffered a traumatic brain injury after a motor vehicle accident. He had been diagnosed with X-ALD after developing adrenal insufficiency ten years prior, but had no known neurologic involvement. Head magnetic resonance imaging (MRI) at the time of his motor vehicle accident revealed bilateral, frontal-predominant cerebral microbleeds, with no white matter abnormalities (Figure 1). After a 1-month hospital admission, he was transferred to rehabilitation, and during 2 months there, he reattained independence of activities of daily living. Unfortunately, he then suffered an acute neurocognitive decline, with inattention, disorientation, apathy, and impaired memory. Motor, sensory, and coordination testing was otherwise grossly unremarkable. Repeat gadolinium-enhanced MRI of the head showed interval development of symmetric, confluent, frontal-predominant white matter T2-hyperintensities, without enhancement (Figure 2). Given his medical history, he was diagnosed with cerebral activation of X-ALD after head trauma. 1 , 2 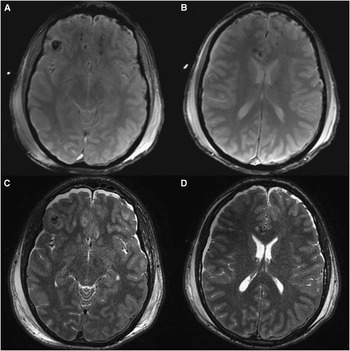 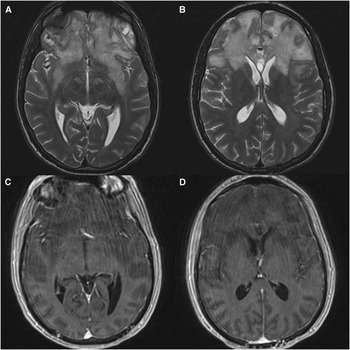 X-ALD is a disease of the adrenal cortex and nervous system white matter. It is caused by mutation of the ABCD1 gene, which encodes a protein involved in breakdown of very long-chain fatty acids (VLCFAs). 1 , 2 Disease phenotypes include a childhood cerebral form, adrenomyeloneuropathy in early adulthood, and adrenal insufficiency. Cerebral X-ALD after head trauma is rare and challenging diagnostically if there is no patient or family history of the disease. The pathophysiology is poorly understood, but may be related to biochemical cascades after trauma that promote inflammation, inhibit VLCFA breakdown, and lead to increased VLCFA incorporation into myelin. 1 Our patient provides one of the clearest published accounts of cerebral X-ALD triggered by head trauma with no clinical or radiographic evidence of cerebral X-ALD at the time of injury. Three months after his traumatic brain injury, he suffered an acute neurocognitive decline with new, confluent, frontal-predominant white matter abnormalities on MRI, bolstering the plausibility of cerebral X-ALD triggered by frontal-predominant traumatic microbleeds. Importantly, our case highlights how the white matter abnormalities in cerebral X-ALD may be most prominent at the site of cerebral injury, rather than in the parieto-occipital pattern that is typically described. The leading-edge enhancement characteristic of cerebral X-ALD was not seen, demonstrating that absence of this finding is not incompatible with diagnosis. The recognition of this rare entity may be instrumental to avoiding excessive and invasive diagnostic testing, such as brain biopsy. A delay may occur between the time of head trauma and clinicoradiographic onset of cerebral X-ALD, suggesting this diagnosis merits consideration even months after head injury. Close monitoring of patients with X-ALD after head injury may be warranted, particularly if disease-modifying therapy becomes available.