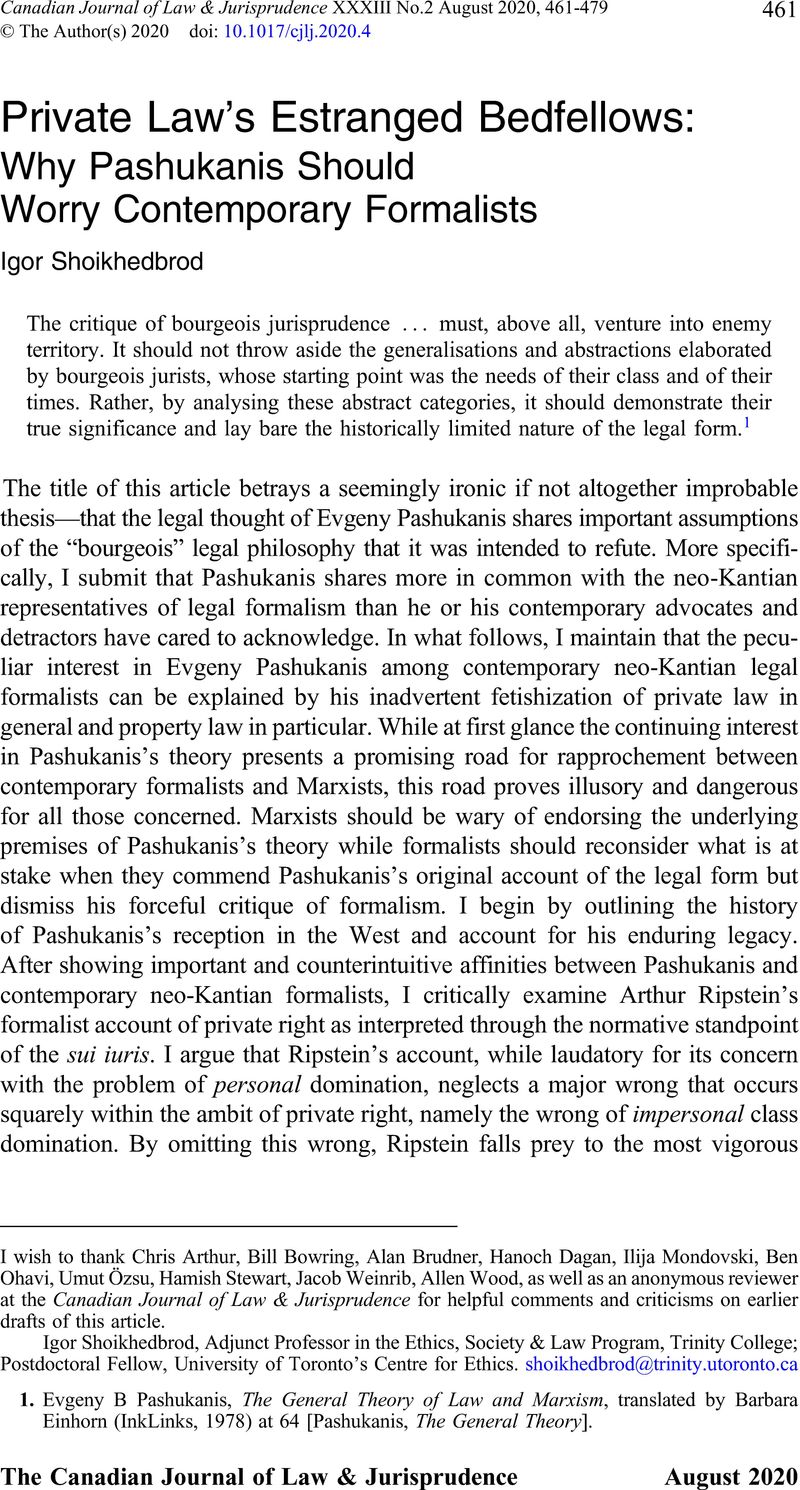 3. Michael Head, Evgeny Pashukanis: A Critical Reappraisal (Routledge, 2008) at 15. Pashukanis’s reputation must have been so firmly established in Soviet circles that the elusive P Yudin found it necessary to denounce him as a “crafty rascal and enemy of the people”—a charge that would replay itself in the history of Soviet legal philosophy. See P Yudin, “Socialism and Law” in Hazard, supra note 2 at 288.

4. Rehearsing the Stalinist trope of Pashukanis as wrecker, Vyshinsky wrote: “From the standpoint of such an understanding of law as that held by Stuchka and Pashukanis, soviet law was doomed from its very emergence to fade away and to die out.… and individual institutes of soviet law, designed to protect, confirm, and develop new socialist relationships were rendered powerless to develop.” Andrey Vyshinsky, “Fundamental Tasks of Soviet Law” in Hazard, supra note 2 at 330-31. Vyshinsky’s remarks above underscore Pashukanis’s unyielding commitment to the withering away of law and also evidence the perils of paying lip service to invocations of socialist legality and rights for the purposes of justifying political terror and repression.

21. Evgeny Pashukanis, “The Situation on the Legal Theory Front” in Hazard, supra note 2 at 255.

22. Indeed, as we will see in our closing discussion of Arthur Ripstein’s recent formalist account of the private law of torts, the legal subject assumes the status of a sui iuris—the untrammeled owner of one’s person and of their property.

33. Ernest J Weinrib, The Idea of Private Law (Oxford University Press, 2012) at 139. It is telling that Weinrib here commends Pashukanis’s account of the congruence of commodity and legal form and elsewhere castigates Marx’s derivation of legal relations from historically-specific relations of production as crudely instrumentalist. For Weinrib’s interpretation of Marx as a crude instrumentalist, see Ernest Weinrib, “The Intelligibility of the Rule of Law” in Allan Hutchinson & Patrick Monahan, eds, The Rule of Law: Ideal or Ideology? (Carswell, 1987) at 63.

37. For a helpful elaboration of this point, see Robert Fine, Democracy and the Rule of Law: Liberal Ideals and Marxist Critiques (Pluto Press, 1984) at 157.

43. Ibid at 237. For a well-researched account of Pashukanis’s 1930 article on “The Situation on the Legal Theory Front” and his broader theoretical trajectory, see Bill Bowring, “The Theoretical Trajectory of Evgeniy Pashukanis” in Law, Rights and Ideology in Russia: Landmarks in the Destiny of a Great Power (Routledge, 2013).

44. Pashukanis, “The Situation on the Legal Theory Front” in Hazard, supra note 2 at 271. Beyond this transitionary period of socialist reconstruction, law would wither away as a matter of course. Pashukanis was convinced that, for Marx, there could be no talk of proletarian/socialist law because the period of revolutionary transition in the Soviet Union did not represent a distinct mode of production.

45. The question of Pashukanis’s loyalty to the Stalinist regime has been much debated. A case can be made for both sides (those who see Pashukanis as a loyal functionary and those who see him as a revolutionary Marxist who was principally committed to the withering away of law in the face of Stalin’s dictatorship). In my view, Michael Head’s Pashukanis: A Critical Reappraisal offers the most balanced position, one which refutes superficial criticisms of Pashukanis while holding him accountable for denouncing Stalin’s rivals when it was politically expedient. For competing views on this question, see Antonio Negri, “Re-Reading Pashukanis: Discussion Notes” (2017) 5:2 Stasis 8; Bowring, supra note 43; John N Hazard, “Pashukanis is No Traitor” (1957) 51:2 Am J Int’l L 385.

50. Ibid. For an engaging critique of Pashukanis’s devaluation of the safeguards provided by abstract legal personhood, see Peter Ramsay, “Pashukanis and Public Protection” in Markus D Dubber, ed, Foundational Texts in Modern Criminal Law (Oxford University Press, 2014) at 216-17. Ramsay calls for a renewed dialectical treatment of law that does not succumb to formalist fetishism or Pashukanis-style technocratic totalitarianism. Unfortunately, Ramsay does not elaborate in much depth on this promising theoretical alternative.

51. China Miéville, a leading exponent of Pashukanis, argues that Pashukanis’s problematic account of technical regulation does not invalidate his theory’s conclusion about the withering away of law. The trouble is that Miéville grossly overlooks the extent to which Pashukanis’s blind spots around technical regulation are the direct outcome of his commodity exchange theory of law. See China Miéville, “For Pashukanis: An Exposition and Defence of the Commodity-Form Theory of Law” in Between Equal Rights: A Marxist Theory of International Law (Pluto Press, 2006) at 110.

54. I grant that Karl Marx would have likely avoided interpreting class domination in the morally-charged language of a wrong (not least because the contract between labour and capital is deemed just by the prevailing juridical standard of bourgeois right). However, Marx nonetheless entertained the view that class domination constitutes a universal wrong. He wrote: “[The proletariat] does not claim a particular redress because the wrong that is done to it is not a particular wrong but wrong in general.” Karl Marx, “Contribution to the Critique of Hegel’s Philosophy of Right: Introduction” in Robert C Tucker, ed, Marx-Engels Reader (Norton, 1978) at 64. My broader point is that the wrong of class domination can be shown to contradict the immanent juridical standard of private right.

55. The view of class domination as a wrong is not necessarily tethered to the labour theory of value. The domination of labour by capital has been interpreted by notable political theorists as enabling capitalists to deny labourers their human rights to the means of life and labour. See in particular CB Macpherson, “Human Rights as Property Rights” in CB Macpherson, ed, The Rise and Fall of Economic Justice and Other Essays (Oxford University Press, 2013) 67.

56. Ripstein engages critically with Marx and Pashukanis in his chapter, “Beyond Corrective and Retributive Justice? Marx and Pashukanis on the ‘Narrow Horizons of Bourgeois Right’” in Equality, Responsibility, and the Law (Cambridge University Press, 1998) 246-63.

59. The neo-republican political theorist Philip Pettit claims that a market system should not be understood as a medium of domination. See Philip Pettit, “Freedom in the Market” (2006) 5:2 Politics, Philosophy & Economics 131. For an opposing view that considers the varied forms of domination that prevail under capitalism, see William Clare Roberts, Marx’s Inferno: The Political Theory of Capital (Princeton University Press, 2017).

61. I do not doubt that a Kantian-inspired formalist state would have strong provisions for those who are disadvantaged by market outcomes, even if it does not at all address the vexing problem of class domination. See Ernest J Weinrib, “Poverty and Property in Kant’s System of Rights” (2003) 78:3 Notre Dame L Rev 795.

62. Ripstein’s account of market misfortunes is particularly jarring for its omission of the problems generated by commodity fetishism. It is jarring in part because Ripstein has previously written a learned article on the problem of commodity fetishism, in which he correctly observes that commodity fetishism is a sociological phenomenon that is specific to capitalism and should not be conceived as an epistemic error that is made by individuals living under capitalist economic arrangements. See Arthur Ripstein, “Commodity Fetishism” (1987) 17:4 Canadian J Philosophy 733 at 746.

64. In fairness, Ripstein does specify limits to the redistributive powers of the state. See Ripstein, Force and Freedom, supra note 32 at 270. Nevertheless, my point here is that the rigid formalist divide between private and public right commits Ripstein to endorse conceptually the most unappealing features of both extremes. The critique of contemporary formalism’s rigid compartmentalization of private and public right is not strictly Marxian in orientation. It can also be found among the Fullerian and Hegelian members of the “Toronto School.” See David Dyzenhaus, “Liberty and Legal Form” in Lisa M Austin & Dennis Klimchuk, eds, Private Law and the Rule of Law (Oxford University Press, 2015), as well as Alan Brudner & Jennifer M Nadler, The Unity of the Common Law, 2nd ed (Oxford University Press, 2013) at 29-35.

65. Ripstein’s reference to public law as securing the “background conditions” for full membership in Private Wrongs is reminiscent of John Rawls’s insistence upon realizing the background conditions for justice as fairness. However, one important difference between Ripstein and Rawls on this score is that the late Rawls critiques the welfare state for failing to deliver on this critical task and allows for alternative ways of restructuring property relations, which range from “property-owning democracy” to “liberal socialism.” The realization of property-owning democracy or liberal socialism would be associated with considerable changes in the domain of private right. Ripstein’s formalist outlook, with its rigid divide between private and public law, bars this this Rawlsian possibility from the outset. Therein lies the difference between how Ripstein and Rawls understand what is involved in securing the background conditions for distributive justice. See John Rawls, Justice as Fairness: A Restatement, ed by Erin Kelly (Harvard University Press, 2001) at 135-50.

68. Unlike Pashukanis, Marx further identifies an “organic” relation between forms of production and legal relations that bourgeois economists treat as “accidental” and “reflective,” which demonstrates in his view their crudity and lack of conceptual understanding. Marx, Grundrisse, supra note 66 at 88. For a more elaborate analysis of Marx’s account of law and rights, see Igor Shoikhedbrod, Revisiting Marx’s Critique of Liberalism: Rethinking Justice, Legality and Rights (Palgrave Macmillan, 2019).

69. For an excellent discussion of this point, albeit one that endeavours to show the ways in which liberal jurists can benefit from engaging with Pashukanis’s analysis, see Nigel Simmonds, “Pashukanis and Liberal Jurisprudence” (1985) 12:2 JL & Soc’y 135.