Eslicarbazepine is a novel anti-epileptic agent indicated for the treatment of partial-onset seizures. We present the case of an 18 year old female that presented to the Emergency Department four hours after a reported intentional ingestion of an estimated 5600 mg of eslicarbazepine. Although initially hemodynamically stable and neurologically normal, shortly after arrival she developed confusion, rigidity and clonus, followed by recurrent seizures, hypoxemia and cardiac arrest which responded to cardiopulmonary resuscitation and wide complex tachycardia requiring defibrillation. Treatment for refractory seizures included benzodiazepines and eventual intubation and sedation with propofol. Cardiac toxicity responded to sodium bicarbonate. In addition, empiric hemodialysis was performed. In this case report, we discuss the successful management of the first reported overdose of eslicarbazepine using supportive care and hemodialysis.

Eslicarbazepine (ESL; Aptiom™) is a novel anti-epileptic medication that was approved by the US Food and Drug Administration (FDA) in 2013 and has been available in Canada since 2014 for the treatment of adult partial-onset and generalized seizures. ESL is a member of the dibenzazepine family that also includes carbamazepine (CBZ) and oxcarbazepine (OXC). The mechanism of action of ESL is similar to that of CBZ and OXC and involves blockade of voltage-gated sodium channels, thereby interfering with the generation and propagation of epileptic discharges. We report a large intentional ingestion of ESL that resulted in recurrent seizures and cardiovascular toxicity.

An 18-year-old female was brought by her friend to the Emergency Department (ED) to obtain treatment for a migraine unresponsive to acetaminophen-codeine and marijuana. Her initial vital signs revealed a heart rate of 142 beats per minute (bpm), blood pressure of 133/95 mm Hg, temperature of 37.2°C (98.96°F), respiratory rate of 18 breaths per minute, and oxygen saturation of 98% on ambient air. Her past medical history included migraines, an eating disorder, and depression. Her only regular medication was paroxetine (20 mg daily), which was prescribed recently (exact date unknown). While in the waiting room, the patient told her friend that she had taken a “handful” of his anti-seizure medication. The patient was then transferred to the trauma room for immediate assessment.

Further history revealed that she ingested 5,600 mg of ESL (once daily, non-extended release formulation; 112 mg/kg exposure) three to four hours prior to presenting to the hospital. Estimated time of ingestion was between 04:00 and 06:00. She denied coingestants aside from three tablets of acetaminophen-codeine and her prescribed dose of paroxetine the previous day. She denied taking any additional doses of paroxetine.

The patient was placed on a cardiac monitor, and intravenous (IV) access was obtained. Her vital signs three to five hours post-ingestion remained stable, with a heart rate of 125 bpm, blood pressure of 127/83 mm Hg, oxygen saturation of 98% on ambient air, and temperature of 36.6°C (97.88°F). Her initial Glasgow Coma Score (GCS) was 13 (E3V4M6), and her pupils were dilated at 7 mm and sluggishly reactive. A neurological exam demonstrated slurred speech, shivering, restlessness, brisk reflexes, increased tone in all extremities, and mild non-sustained lower extremity clonus. An electrocardiogram (ECG) performed following her initial assessment (estimated three to five hours post-ingestion) revealed sinus tachycardia with QTc of 519 ms. No prior ECGs were available for comparison. A rhythm strip taken at this time is shown in Figure 1A. Initial bloodwork including electrolytes, extended electrolytes (magnesium, phosphate, and total calcium), liver biochemistry (aspartate aminotransferase [AST] and alanine aminotransferase [ALT]), and glucose was within normal limits. The acetaminophen level was <66 mmol/L, and a urine drug screen was positive for only tricyclic antidepressants (TCA) that may have represented cross-reactivity with ESL. Confirmatory plasma TCA testing was not performed. 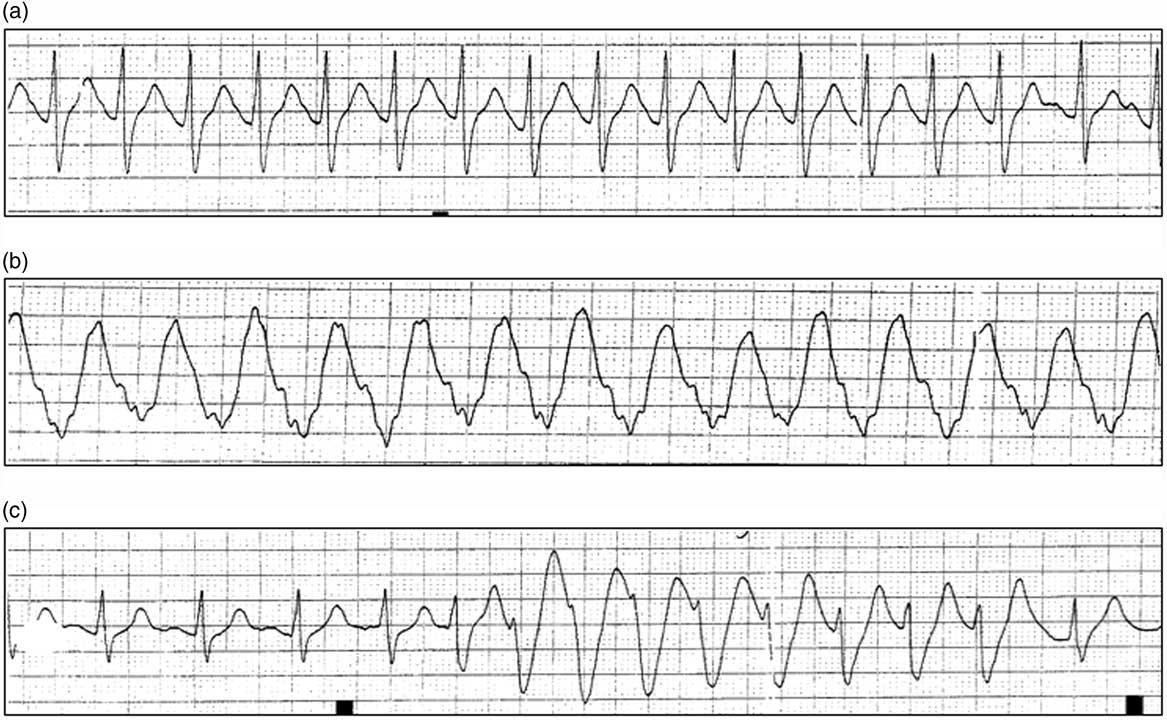 The provincial poison centre was contacted and informed us that there were no previously reported cases of ESL overdose. Given the prolonged time since ingestion (up to four hours), along with an impaired level of consciousness, gastric decontamination was not recommended, and supportive care including serial ECGs and continuous cardiac monitoring was suggested.

Over the next hour, she became increasingly confused and developed non-specific posturing and increased tone in all extremities. Although not entirely consistent with seizures, lorazepam 2 mg IV was administered, and the posturing and hypertonia resolved. Repeat ECG (four to six hours post-ingestion) showed normalization of her QTc to 456 ms. Following the administration of lorazepam, the patient’s GCS decreased to 9 (E2V3M4), and the intensive care unit (ICU) service was consulted.

Approximately one hour later (five to seven hours post-ingestion), the patient had a generalized tonic-clonic seizure that was associated with apnea. Supplemental oxygen was applied, and a second dose of lorazepam 2 mg IV was administered that abated the seizure. Within minutes, she had another generalized seizure that lasted 10 seconds. Following the second seizure, the patient’s femoral pulse was undetectable. Chest compressions were started immediately. Return of spontaneous circulation (ROSC) was achieved after one cycle of cardiopulmonary resuscitation (CPR); however, she continued to seize. Her blood pressure following ROSC was 115/66 with an oxygen saturation of 86% on 15 L delivered through a non-rebreather. A third dose of lorazepam 2 mg IV was administered, and the patient was readied for intubation. Intubation proceeded following the administration of midazolam 10 mg IV. Immediately after intubation, a cardiac monitor showed sustained wide complex tachycardia at 258 bpm (Figure 1B), with a palpable, though weak, pulse. Biphasic defibrillation at 200 J was performed, and the patient’s rhythm converted to a narrow complex tachycardia at 112 bpm with a blood pressure of 139/80 mm Hg. One ampule of sodium bicarbonate (50 mL of 8.4% sodium bicarbonate) was administered as a bolus, and a second dose of midazolam 10 mg IV was administered for ongoing seizure activity. A propofol infusion was initiated at 50 mcg/kg/min and titrated until the cessation of clinical seizure activity was achieved. Laboratory investigations at this time revealed the following: sodium 146 mmol/L, potassium 3.4 mmol/L, chloride 103 mmol/L, and glucose 14.1 mmol/L, as well as an anion gap of 24. Venous blood gas post-intubation revealed the following: pH 6.91, CO2 72 mm Hg, bicarbonate 14 mmol/L, and lactate 15 mmol/L.

Once her seizures were controlled, six to eight hours post-ingestion, central venous access through the right internal jugular vein was established, and a sodium bicarbonate infusion was initiated (150 mL of 8.4% sodium bicarbonate in 1 L 5% dextrose solution at 150 mL/hour). Bedside cardiac ultrasound demonstrated adequate cardiac contractility. An orogastric tube was inserted, and normal-appearing gastric contents were aspirated. Whole-bowel irrigation was initiated, with 500 mL/hour of polyethylene glycol solution (PEG-lyte™) because of the prolonged half-life of the drug, though it was later discontinued after discussion with the provincial poison centre. The patient continued to have brief self-limited runs of non-sustained ventricular tachycardia (Figure 1C).

Upon further discussion with the poison centre, ESL was considered to be potentially dialyzable based on its chemical similarly to CBZ. 1 Following consultation with the nephrology service, hemodialysis was arranged. Hemodiafiltration (PF 210 dialyzer, dialysate composition: potassium 4.0 mmol/L, sodium 140 mmol/L, calcium 1.5 mmol/L, bicarbonate 30 mmol/hour; net fluid removal: 0.3 L; duration: 6 hours) was initiated 10 to 12 hours after the drug ingestion. 2 No clinical seizure activity was noted during hemodialysis, and she remained hemodynamically stable throughout. The following day, approximately 30 hours post-ingestion, propofol was weaned, and the patient awoke and was extubated uneventfully. On post-admission day two, she was medically stable and transferred from the ICU to the Psychiatric ICU for mental health evaluation.

We present a reported intentional overdose of the anti-epileptic drug, ESL, and the patient presented with severe neurological and cardiac toxicity. Although there were no reported or suspected coingestants taken in overdose, we cannot exclude the potential effect of paroxetine contributing to the clinical findings that may have been consistent with serotonin syndrome (SS) in this case.

The mechanism of action of ESL is similar to that of CBZ and OXC and involves blockade of voltage-gated sodium channels, thereby interfering with the generation and propagation of epileptic discharges. 3 ESL is structurally similar to CBZ, though it is not metabolized to a toxic 10,11-epoxide metabolite and thus not thought to possess significant cytochrome P450-inducing activity. 4 ESL arises from the prodrug, eslicarbazepine lactate, following first-pass metabolism, with an estimated oral bioavailability of 90%. 5 In therapeutic dose ranges (400–1600 mg/day), peak serum levels are achieved one to four hours after ingestion, with an estimated half-life in healthy volunteers ranging from 9 to 20 hours. 4 , 5 At therapeutic doses, approximately 30% of ESL is protein bound. Elimination is primarily through the renal route, with 90% of the drug recovered in urine. 4 ESL is highly water soluble and less lipid soluble than either its parent compound or OXC. 4 Data on the effect of supra-therapeutic or overdose ingestion on the pharmacokinetics of ESL are not available.

Treatment in our case was directly aimed at resuscitation and stabilization, followed by empiric hemodialysis. Our initial concerns were related to cardiac toxicity, namely QRS prolongation and arrhythmia, as the result of cardiac sodium channel blockade. Although the patient was initially stable, her level of consciousness quickly deteriorated, and she developed recurrent seizures and wide complex tachycardia. She was administered sodium bicarbonate to narrow her QRS interval, in addition to CPR and defibrillation. We were advised that lipid emulsion therapy was unlikely to have a role because reports suggest low lipid solubility. 5 Ultimately, she required sedation with propofol and endotracheal intubation to control her seizures. It was also noted that the patient had hyperglycemia (14.1 mmol/L) early during her admission that was likely an acute stress response to her medical illness. It is unclear at this point if hyperglycemia is associated with exposure to ESL.

A recent review suggests considering extracorporeal removal in the setting of severe CBZ poisoning, despite little support in the literature and the unfavourable pharmacokinetics of CBZ. 2 , 4 Given the more favourable properties of ESL (low lipid solubility, high water solubility, small size, and relatively low plasma protein bound fraction in therapeutic dosages), hemodialysis was initiated to facilitate elimination. Unfortunately, we were not able to quantify the blood levels of ESL to guide the duration of hemodialysis; however, the patient’s clinical status stabilized following the initial six-hour run, and no further sessions were required.

Our case report has a number of important limitations. First, we do not have information regarding the patient’s plasma concentration of ESL as testing is not readily available. As a result, we are unable to confirm exposure to this agent rather than an alternative agent that could have resulted in the same clinical presentation (e.g., diphenhydramine). Additionally, we are unable to demonstrate an association between the patient’s clinical presentation and plasma concentration of ESL, demonstrate clearance of the drug following hemodialysis, or confirm the presence of the drug in the dialytic effluent to determine clearance. Second, although CBZ is known to result in a positive urine drug screen for TCA, confirmatory plasma quantitative TCA testing was not performed either before or after hemodialysis. Third, while the patient admitted to taking only ESL in overdose, she also reported taking her prescribed dose of paroxetine the day before. The findings on initial presentation, including confusion, mydriasis, rigidity, and clonus, are also consistent with that of SS, which may have resulted from an intentional overdose of her selective serotonin reuptake inhibitor (SSRI) either alone or in combination with ESL. Interestingly, a case of fatal SS that resulted from a presumed therapeutic interaction of the SSRI sertraline, and OXC has been previously reported. 6

This case report describes toxicity associated with a reported intentional ESL overdose that caused recurrent seizures and life-threatening arrhythmia and was successfully managed with supportive care including sedation for seizures and sodium bicarbonate for arrhythmia. Although hemodialysis was performed, in the absence of drug levels, it is not possible to infer a benefit from extracorporeal drug clearance. Future cases should quantify the drug concentrations and efficiency of dialytic clearance.