A comparative study of patient characteristics, opinions, and outcomes, for patients who leave the emergency department before medical assessment

The emergency department (ED) left-without-being-seen (LWBS) rate is a performance indicator, although there is limited knowledge about why people leave, or whether they seek alternate care. We studied characteristics of ED LWBS patients to determine factors associated with LWBS.

We collected demographic data on LWBS patients at two urban hospitals. Sequential LWBS patients were contacted and surveyed using a standardized telephone survey. A matched group of patients who did not leave were also surveyed. Data were analysed using the Fisher exact test, chi-square test, and student t-test.

The LWBS group (n=1508) and control group (n=1504) were matched for sex, triage category, recorded wait times, employment and education, and having a family physician. LWBS patients were younger, more likely to present in the evening or at night, and lived closer to the hospital. A long wait time was the most cited reason for leaving (79%); concern about medical condition was the most common reason for staying (96%). Top responses for improved likelihood of waiting were shorter wait times (LWBS, 66%; control, 31%) and more information on wait times (41%; 23%). A majority in both groups felt that their condition was a true emergency (63%; 72%). LWBS patients were more likely to seek further health care (63% v. 28%; p<0.001) and sooner (median time 1 day v. 2-4 days; p=0.002). Among patients who felt that their condition was not a true emergency, the top reason for ED attendance was the inability to see their family doctor (62% in both groups).

LWBS patients had similar opinions, experiences, and expectations as control patients. The main reason for LWBS was waiting longer than expected. LWBS patients were more likely to seek further health care, and did so sooner. Patients wait because of concern about their health problem. Shorter wait times and improved communication may reduce the LWBS rate.

Patients who present to an emergency department (ED) are assessed and treated according to a triage system that determines priority. 1 This model often results in long waiting times, overcrowding, patient dissatisfaction, high walk-out or left-without-being-seen (LWBS) rates for those categorized as lower priority. 1 Although LWBS rates are routinely tracked, monitored, and used as an indicator of ED performance, there is limited knowledge about why people leave or whether they seek alternate care.

The literature indicates that LWBS patients have conditions of lower urgency and lower acuity, are more likely to be male and younger, and are likely to identify prolonged waiting times as a central concern. 2 , 3 Although there are reports of low rates of adverse health effects in the LWBS population, including low-return ED visits and hospitalizations, 4 , 5 others report that LWBS patients often seek alternative medical attention and exhibit higher rates of ongoing symptoms at follow-up compared to those who wait. 6 , 7

In 2009-2010, the ED of our tertiary referral centre averaged LWBS rates of 9%-10%; this number was more than three times the national average of 3%. 8 In this study, we wished to determine factors contributing to the local LWBS rate. We also wished to compare LWBS patients to a similar group of triaged patients who did not leave to determine whether factors associated with leaving were intrinsic or extrinsic to patient characteristics. Finally, we were interested in determining the proportion of LWBS patients who sought further medical attention.

We performed a cross-sectional survey and follow-up telephone survey of ED patients using a matched case-control design to compare characteristics, factors associated with LWBS and subsequent events for ED LWBS patients, with a demographically matched control group of patients who waited to be seen.

We collected demographic data over a 6-month period on 1508 LWBS patients in two urban hospitals located in one city; one hospital was a tertiary referral centre, and the other was an urgent care centre. Both hospitals use a standard process of tracking all LWBS patients, which includes monitoring all patients who leave the ED without being assessed by a physician, regardless of their triage level or reason for ED visit.

A total of 467 sequential LWBS patients were contacted and surveyed by nursing staff using a standardized telephone survey (Table 1). Nursing staff were not blinded to LWBS and control groups. Two attempts were made to contact each patient. Data on a matched control group of 1504 patients who did not leave the ED were collected, and 437 control patients were also surveyed. Matching was attempted for the triage category, employment and education, distance from hospital to home, and having a family physician. Re-attendance and readmissions were screened at both centres. Categorical data were analysed using chi-square and Fisher exact tests. Participation was voluntary and confidential. The study was approved by the Horizon Health Network Research Ethics Board. Because of the nature of the study and in compliance with national research guidelines, a request to waiver written consent was obtained by the institutional research ethics board. 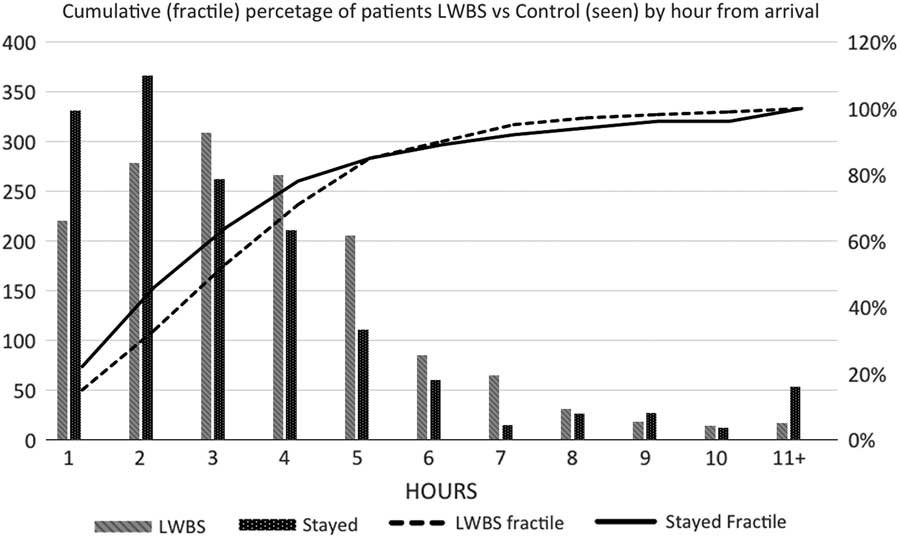 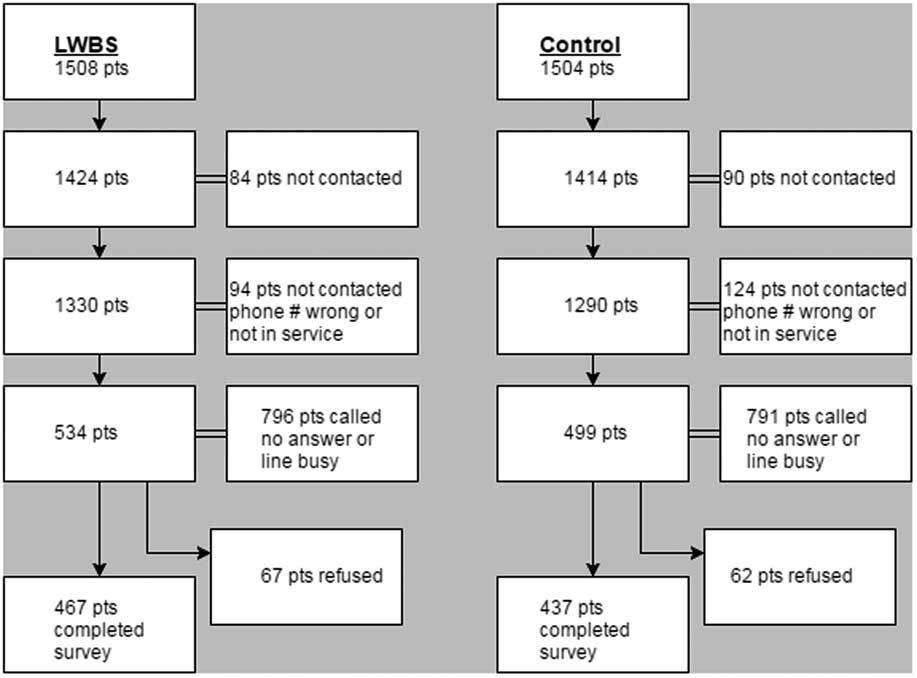 Figure 2 Study CONSORT diagram detailing the flow of left-without-being-seen (LWBS) patients and patients who stayed (control) through the study. 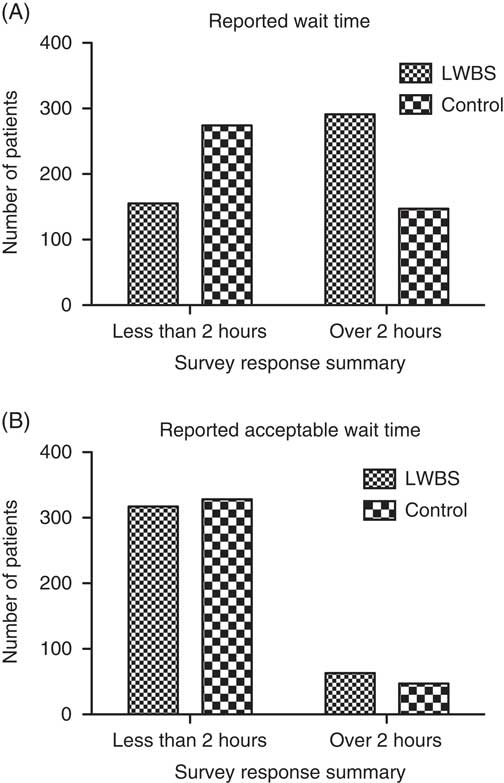 Figure 3, A and B Comparison responses for A: How long did you wait before being seen (or leaving)? and B: What is the length of time you feel you should have waited with your condition? 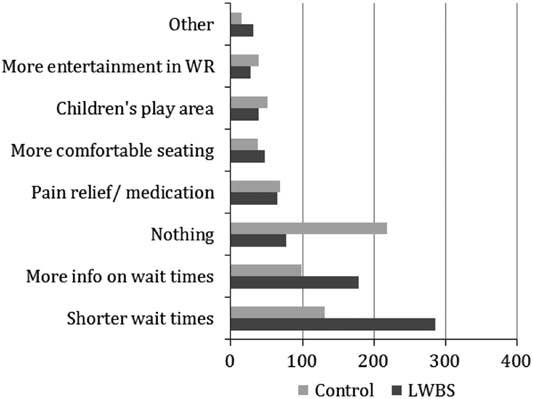 Of those patients who did not feel that their presentation was a true emergency (LWBS 37%; control 28%), the top reason given for ED attendance in both groups was the inability to see their family doctor (62% and 62%, respectively).

Although the most common change that patients stated that they would prefer was shorter waiting times, the next most popular suggested improvement was more information on waiting times. Published literature on consumer preferences indicates that improved communications and expectation setting are important for improved customer satisfaction. 9 , 10 Providing accurate information on the estimated wait may be one way to alter patients’ expectations of and tolerance for wait time, and thus change the rate of patients leaving.

The commonly cited reason of waiting too long to be seen is consistent with previously published reports on LWBS. 11 Although the majority of our patients were triaged at a lower level, some were not, and 3% ultimately required an inpatient hospital admission for the same issue. Particularly concerning is the large number of our LWBS patients who could not be located. It cannot be assumed that these patients’ conditions improved and/or that they did not experience a significant health event as a result of not being seen in the ED. This fact underscores the continued importance of LWBS, despite years of research in the issue 7 and a need to address ED wait times.

Fewer LWBS patients were eventually admitted for their presenting problem compared to controls (3% v. 7%, respectively), suggesting that some patients may be able to self-triage. Our rate of ED return and subsequent hospital admission among LWBS patients is considerably lower than the 11% previously reported. 6 It is possible that our ED is able to appropriately discern those who require immediate ED care from those who can wait.

A high percentage of all patients attended the ED because they were unable to see their primary care provider. Although limited access to primary care may be an important determinant of ED utilization, the fact that almost three-quarters of our LWBS patients perceived their condition as being a true emergency is particularly concerning. This finding suggests that LWBS is a high-risk group that deserves further attention. More important, it highlights that access to health care services in general can be problematic for many. LWBS is a complex issue that transcends multiple levels of the health care system and demands a multilevel response.

Investigators conducting the telephone surveys were not blinded to a study group; however, because the structured survey tool was designed in advance, the major limitation is the reliability of the tool. The telephone surveys were completed with only one-third of all patients in each group. It is possible that the experiences of those who did participate were not representative of the entire study sample; however, each group was satisfactorily matched. Telephone surveys were collected retrospectively, which may have led to recall bias. Estimates of perceived wait times were given in ranges, which may lead to data accuracy problems; however, the use of ranges are pragmatic and easily understood by the participants.

ED LWBS patients had similar opinions, experiences, and expectations as controls. Despite otherwise closely matched patients’ characteristics, LWBS patients believed that the wait times were longer than expected. Suggested improvements included shorter wait times and provision of more information on wait times. LWBS patients may be more likely to self-triage to alternate care: they do so sooner and in higher proportion but were less likely to be admitted to the hospital for the presenting problem. Both study groups contained patients requiring admission, demonstrating that LWBS patients do carry risk. Further study should explore relationships between LWBS patients, ED boarding rates, and physician initial assessment times.

Acknowledgements: We wish to acknowledge the assistance of Kerry Betts, Debra Pitts, Tammy Lawson, and Kim David, who helped perform the telephone surveys and reviewed the manuscript.