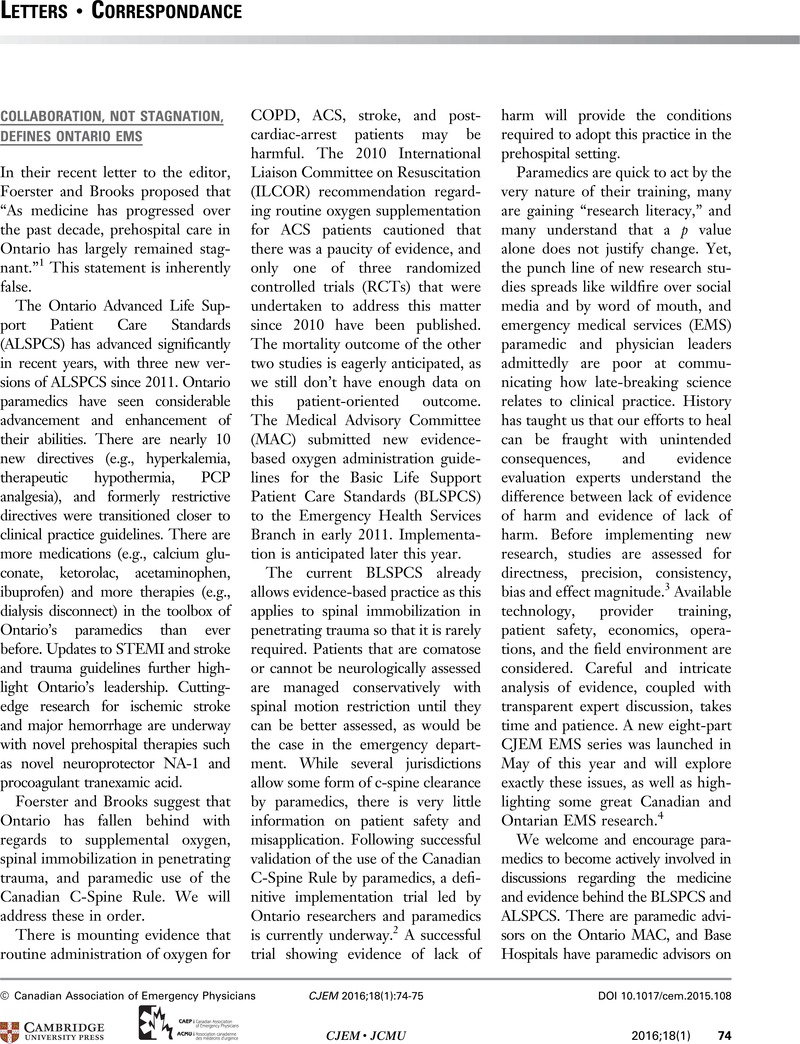 An abstract is not available for this content so a preview has been provided. To view the full text please use the links above to select your preferred format.
Type
Letters
Information
Canadian Journal of Emergency Medicine , Volume 18 , Issue 1 , January 2016 , pp. 74 - 75
DOI: https://doi.org/10.1017/cem.2015.108[Opens in a new window]
Copyright
Copyright © Canadian Association of Emergency Physicians 2015

Foerster and Brooks suggest that Ontario has fallen behind with regards to supplemental oxygen, spinal immobilization in penetrating trauma, and paramedic use of the Canadian C-Spine Rule. We will address these in order.

There is mounting evidence that routine administration of oxygen for COPD, ACS, stroke, and post-cardiac-arrest patients may be harmful. The 2010 International Liaison Committee on Resuscitation (ILCOR) recommendation regarding routine oxygen supplementation for ACS patients cautioned that there was a paucity of evidence, and only one of three randomized controlled trials (RCTs) that were undertaken to address this matter since 2010 have been published. The mortality outcome of the other two studies is eagerly anticipated, as we still don’t have enough data on this patient-oriented outcome. The Medical Advisory Committee (MAC) submitted new evidence-based oxygen administration guidelines for the Basic Life Support Patient Care Standards (BLSPCS) to the Emergency Health Services Branch in early 2011. Implementation is anticipated later this year.

The current BLSPCS already allows evidence-based practice as this applies to spinal immobilization in penetrating trauma so that it is rarely required. Patients that are comatose or cannot be neurologically assessed are managed conservatively with spinal motion restriction until they can be better assessed, as would be the case in the emergency department. While several jurisdictions allow some form of c-spine clearance by paramedics, there is very little information on patient safety and misapplication. Following successful validation of the use of the Canadian C-Spine Rule by paramedics, a definitive implementation trial led by Ontario researchers and paramedics is currently underway.Reference Vaillancourt, Stiell and Beaudoin 2 A successful trial showing evidence of lack of harm will provide the conditions required to adopt this practice in the prehospital setting.

Paramedics are quick to act by the very nature of their training, many are gaining “research literacy,” and many understand that a p value alone does not justify change. Yet, the punch line of new research studies spreads like wildfire over social media and by word of mouth, and emergency medical services (EMS) paramedic and physician leaders admittedly are poor at communicating how late-breaking science relates to clinical practice. History has taught us that our efforts to heal can be fraught with unintended consequences, and evidence evaluation experts understand the difference between lack of evidence of harm and evidence of lack of harm. Before implementing new research, studies are assessed for directness, precision, consistency, bias and effect magnitude.Reference Bigham and Welsford 3 Available technology, provider training, patient safety, economics, operations, and the field environment are considered. Careful and intricate analysis of evidence, coupled with transparent expert discussion, takes time and patience. A new eight-part CJEM EMS series was launched in May of this year and will explore exactly these issues, as well as highlighting some great Canadian and Ontarian EMS research.Reference Carter and Welsford 4

We welcome and encourage paramedics to become actively involved in discussions regarding the medicine and evidence behind the BLSPCS and ALSPCS. There are paramedic advisors on the Ontario MAC, and Base Hospitals have paramedic advisors on their regional committees, which facilitates paramedic engagement. It is encouraging that a paramedic brought forward one of the medical directives (for therapeutic hypothermia), and we wholeheartedly embrace continued academic engagement by paramedics in shaping the future of their practice. We would encourage and support other paramedics to submit evidence-based summaries for changes or additions to the medical directives.

To say that prehospital care in Ontario has been stagnant is patently false; Ontario’s paramedicine leaders are tirelessly working alongside frontline paramedics to improve patient well-being.

* Views captured on Cambridge Core between September 2016 - 2nd March 2021. This data will be updated every 24 hours.