The Multidisciplinary Journal of the Society for Business Ethics

Published on behalf of Society for Business Ethics
Journal Home 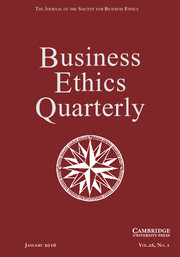