Bulletin of the School of Oriental and African Studies - Latest issue 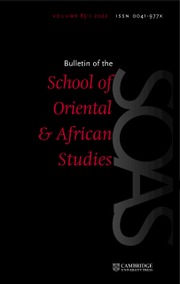