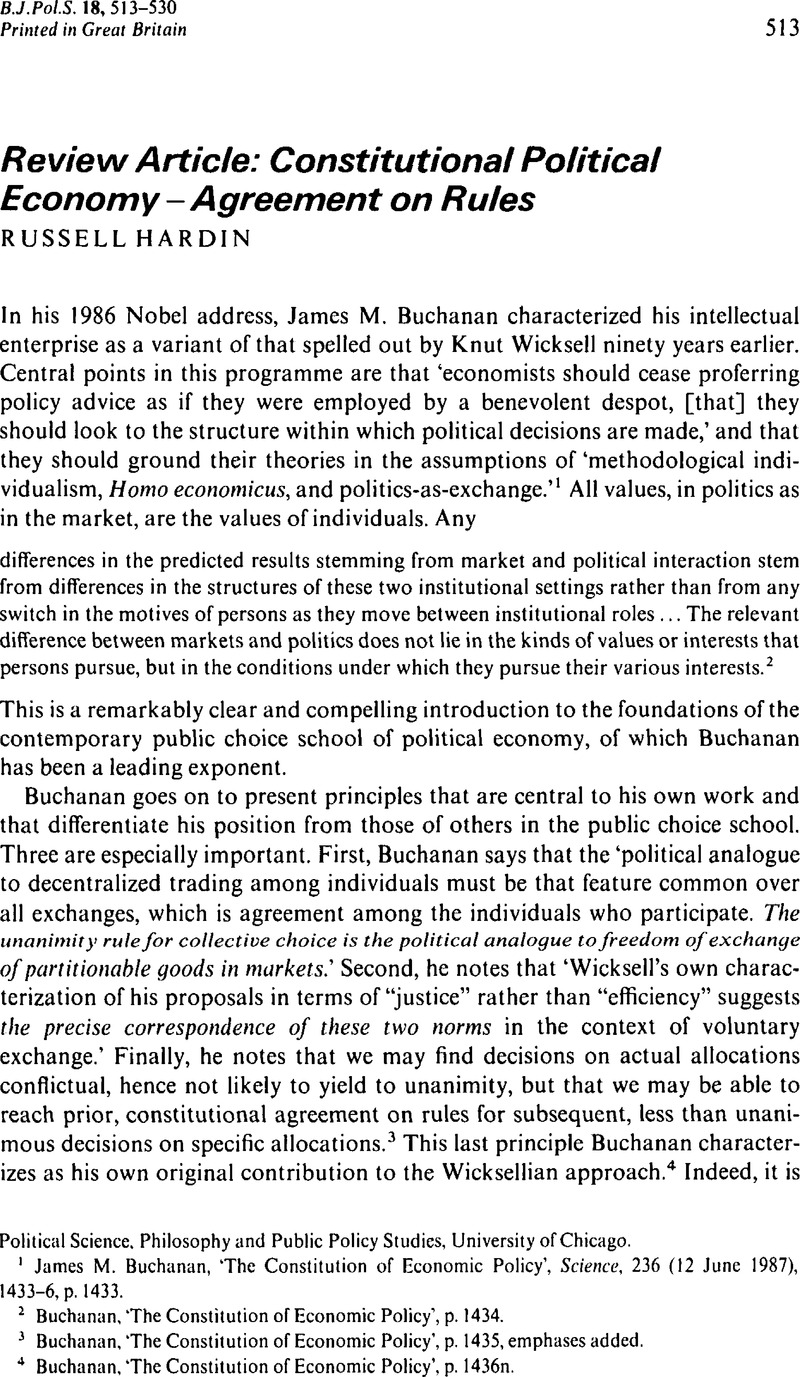 6 Brennan, Geoffrey and Buchanan, James M., The Reason of Rules: Constitutional Political Economy (Cambridge: Cambridge University Press, 1985), pp. 27–31, 107. Page references to this book will be given in the text in parentheses.

7 He and Brennan, say, ‘It is consensus that performs [the] basic normative function’ in their account (p. 98).

12 Quoted in Miller, John C., The Federalist Era, 1789–1801 (New York: Harper, 1960), p. 82. Many of his contemporaries must have ranked Hamilton's as among the least trustworthy hands around. Rossiter calls the Constitution ‘only a spider's web of words’ that, upon ratification, still had to be converted ‘into the solid reality of a political system both operational and legitimate’ (Rossiter, Clinton, 1787: The Grand Convention (New York: Macmillan, 1966), p. 299).

14 Buchanan, and Tullock, , The Calculus of Consent.

15 Madison's frail device is to suppose that ‘assent may be inferred, where no positive dissent appears’. (Madison, James, ‘Letter to Thomas Jefferson, 4 February 1790’, pp. 70–1 in Kurland, Philip B. and Lerner, Ralph, The Founders' Constitution (Chicago: University of Chicago Press, 1987), 5 vols, ‘Volume I: Major Themes’, p. 71.) The frailty of the device in his case is that it was invoked less than two years after he had struggled, in the Federalist Papers and in extensive politicking, against strong opposition to get the Constitution ratified.

17 See also remarks on pp. 101, 146. For a nearly opposite complaint that even economists object to the use of explanation from self-interest in realms other than market economics, see p. 46.

18 In a footnote (p. 37), Buchanan takes most credit for this railing.

22 They say, ‘The contractarian–constitutionalist position is almost necessarily nonconsequentialist and deontological. Evaluative criteria must be applied to rules or processes rather than to end states or results, at least in any direct sense’ (p. 45). See also p. 100.

26 It is such questions that Brennan and Buchanan pose (pp. 145–6) to set up their discussions of norms and civic religion.

27 This is also the chief interest of Buchanan and Tullock, in The Calculus of Consent and of Downs, Anthony in An Economic Theory of Democracy (New York: Harper, 1957).

28 Brennan and Buchanan briefly address this issue in a discussion of who will seek public office (p. 64), although here their central concern seems to be with those who seek elective office.

30 For their views on taxation, see Brennan, Geoffrey and Buchanan, James M., The Power to Tax: Analytical Foundations of a Fiscal Constitution (Cambridge: Cambridge University Press, 1980). For briefer statements on inflation and deficit financing, see The Reason of Rules, pp. 90–3 and 93–4.

31 They say that ‘the empirical record of the establishment of historical states is essentially irrelevant to the contractarian explanatory argument’ (p. 22). It might not be irrelevant to our understanding of the plausibility of their contractarian program and, especially, their commitment to abstract rules.

32 As Buchanan notes, the Philadelphia ‘convention was one of the few historical examples in which political rules were deliberately chosen’ (Buchanan, , ‘The Constitution of Economic Policy’, p. 1436).

33 For further discussion of the fate and role of the constitution, see Hardin, Russell, ‘Why a Constitution?’ forthcoming in Grofman, Bernard and Wittman, Donald, eds, The Federalist Papers.