Forest Clearance and the Roman Army 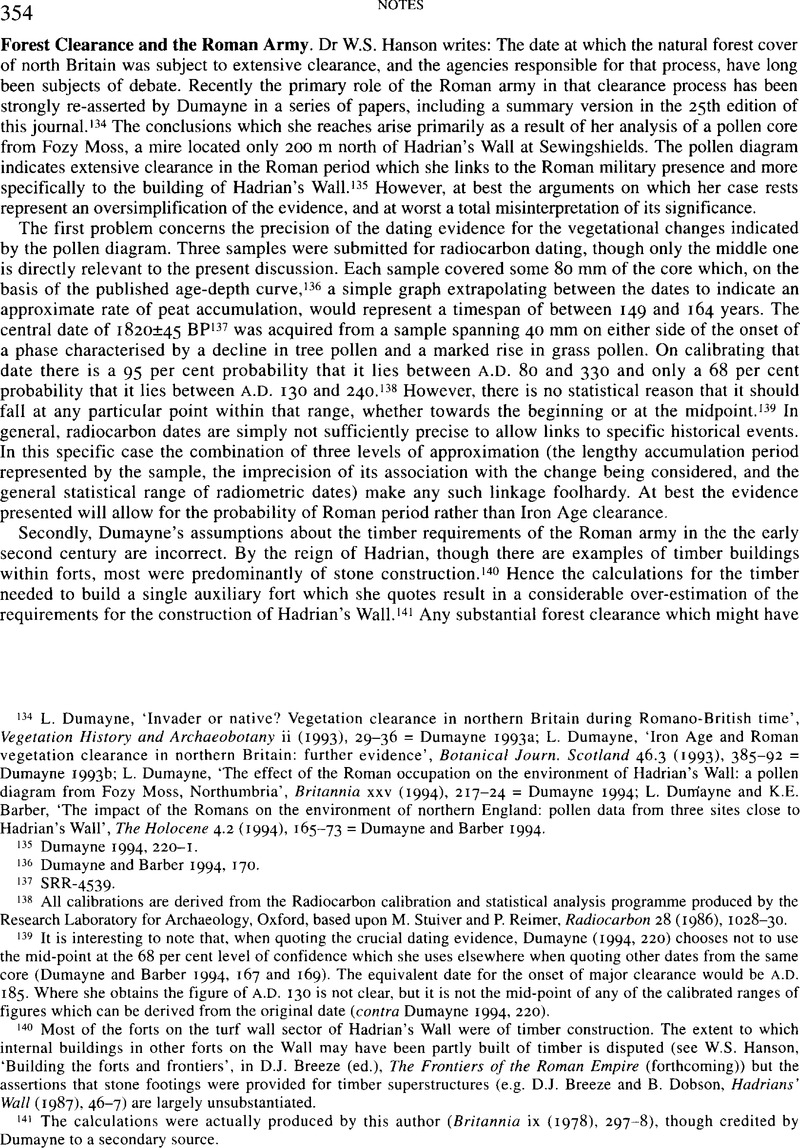 COPYRIGHT: © Dr W.S. Hanson 1996. Exclusive Licence to Publish: The Society for the Promotion of Roman Studies

138 All calibrations are derived from the Radiocarbon calibration and statistical analysis programme produced by the Research Laboratory for Archaeology, Oxford, based upon M. Stuiver and Reimer, P., Radiocarbon 28 (1986), 1028–30.

139 It is interesting to note that, when quoting the crucial dating evidence, Dumayne (1994, 220) chooses not to use the mid-point at the 68 per cent level of confidence which she uses elsewhere when quoting other dates from the same core (Dumayne and Barber 1994, 167 and 169). The equivalent date for the onset of major clearance would be A.D. 185. Where she obtains the figure of A.D. 130 is not clear, but it is not the mid-point of any of the calibrated ranges of figures which can be derived from the original date (contra Dumayne 1994, 220).

140 Most of the forts on the turf wall sector of Hadrian's Wall were of timber construction. The extent to which internal buildings in other forts on the Wall may have been partly built of timber is disputed (see W.S. Hanson, ‘Building the forts and frontiers’, in D.J. Breeze (ed.), The Frontiers of the Roman Empire (forthcoming)) but the assertions that stone footings were provided for timber superstructures (e.g. D.J. Breeze and B. Dobson, Hadrians' Wall (1987), 46–7) are largely unsubstantiated.

141 The calculations were actually produced by this author (Britannia ix (1978), 297–8), though credited by Dumayne to a secondary source.

145 The calibrated figures given are for the full range at two standard deviations, that is 95 per cent confidence.

146 The dates indicated here are statistically the most probable, at 90 per cent or higher, within the range of one standard deviation.

150 W. Pennington, ‘Vegetational history in the north-west of England: a regional synthesis’, in D. Walker and R.G. West (eds), Studies in the Vegetational History of the British Isles (1970), 72–4.

169 e.g. Dumayne 1993a, 34, though this view has been challenged recently (R. Tipping, ‘The determination of cause in the generation of major prehistoric valley fills in the Cheviot Hills, Anglo-Scottish border', in S. Needham and M.G. Macklin (eds), Alluvial Archaeology in Britain (1992), 111–21).

171 I am grateful to Dr R. Housley for his helpful comments on this article.

Forest Clearance and the Roman Army