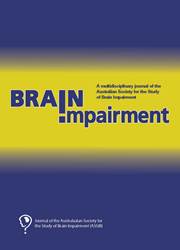 Mental Health is Central to Good Neurorehabilitation after TBI

Those after traumatic brain injury (TBI) who suffer mental health problems, by which I mean problems that a psychiatrist might understand as falling within their remit, suffer a double whammy. Not only do they suffer the stigma of the disabled, but even within this group they may be stigmatised. It has often been my experience that while families will allow for their injured loved one to be under the care of rehabilitation services, including a psychologist, they baulk at the possibility that their loved one may need psychiatric care. This comes to a head when it comes to detaining a patient, in England and Wales, under the Mental Health Act; this may be vigorously resisted by family because of what they infer this says about their loved one's sanity.

Those after traumatic brain injury (TBI) who suffer mental health problems, by which I mean problems that a psychiatrist might understand as falling within their remit, suffer a double whammy. Not only do they suffer the stigma of the disabled, but even within this group they may be stigmatised. It has often been my experience that while families will allow for their injured loved one to be under the care of rehabilitation services, including a psychologist, they baulk at the possibility that their loved one may need psychiatric care. This comes to a head when it comes to detaining a patient, in England and Wales, under the Mental Health Act; this may be vigorously resisted by family because of what they infer this says about their loved one's sanity.

Yet neuropsychiatric, including neuropsychological, sequelae outstrip neurophysical sequelae as a cause of disability after TBI (Bond, Reference Bond1976). Indeed the high mortality rates years after TBI are associated with a history of poor mental health (McMillan, Teasdale, Weir, & Stewart, Reference McMillan, Teasdale, Weir and Stewart2011). Therefore rehabilitation professionals need to be well informed about mental health problems after TBI, and this is one of the aims of the present issue of Brain Impairment.

Two questions need to be asked when it comes to looking at the association of mental health problems with TBI. First, would the problem have been there anyway, even had the person not suffered a TBI? For example, Fann et al. (Reference Fann, Burington, Leonetti, Jaffe, Katon and Thompson2004) found that even though rates of psychosis were higher in the population who suffered a TBI, they were already higher in that population before they suffered their head injury. But even if the mental illness only appears after the TBI, it might still have presented regardless, perhaps because of an association between being vulnerable to suffering TBI, and being vulnerable to suffering mental illness. So, for example, Malaspina et al. (Reference Malaspina, Goetz, Friedman, Kaufmann, Faraone, Tsuang and Blehar2001) showed that head injuries run in the families of those with schizophrenia; non-affected family members of people with schizophrenia reported higher rates of head injuries than non-affected members of control (bipolar) families.

Second, has the TBI modulated the presentation of a mental illness, perhaps resulting in a false negative (i.e., the illness is there but not recognised), or mimicked the symptoms of a mental illness, resulting in a false positive? Thus a patient with moderately severe cognitive impairment may not be able to describe the obsessional thoughts that are driving their compulsive behaviour. Such a patient, with Obsessive Compulsive Disorder, may present with symptoms that are therefore difficult to distinguish from organic rigidity, where brain injury results in a loss of flexibility and ability to adapt to new situations so that the patient resorts to rigid stereotyped behaviours.

The special issue starts with two common and challenging mental health problems after TBI; aggression and substance misuse. Alderman, Knight and Brooks highlight the need for good measurement of aggression, particularly if the effectiveness of interventions is going to be evaluated. Behavioural methods of treatment are endorsed; this is wise advice, even though in many contexts it may be difficult to follow. One of the great advantages of looking first to behavioural methods of management is that they hinder knee-jerk prescribing of drugs whose efficacy in the management of aggression is far from proven.

In many cases, substance abuse (particularly of alcohol) and TBI go hand in hand. But here in the UK the majority of National Health Service substance misuse programmes demand that the patients themselves request help. But TBI often undermines the insight needed to seek help, so patients are left to their own devices, often on a downhill spiral of increasing alcohol consumption and brain injury. It is therefore of interest to find that Bogner and Corrigan, in their helpful systematic review with accompanying critique of the methodology, have found several controlled studies of treatment of substance abuse after brain injury. Although effect sizes of the treatments were not large, it is important that this is not used to condone the almost complete absence of care pathways for such patients to be found in many parts of the UK (Wilson, Reference Wilson2011) and, I suspect, elsewhere in the world.

Depression is the best exemplar of a mental health problem after TBI, where the question related to modulation and mimicry is relevant. Are we failing to spot that somebody is depressed, because the typical symptoms of depression have been modulated by the TBI, or are we over-diagnosing the problem because the TBI has produced symptoms that look like depression? Tsaousides, Ashman and Gordon acknowledge these difficulties and comment on the methodological matters related to the diagnosis and treatment of depression after TBI. Given the methodological uncertainties, it comes as no surprise that they find, as have others, highly variable rates of depression across studies and a variety of methods used to identify depression. This, in turn, confounds the study of treatment efficacy. When it comes to the treatment of possible depression in those with severe TBI, I wonder whether an agnostic approach is needed. Rather than attempt to diagnose depression and then treat, perhaps we should be seeing what symptoms/syndromes seem to be responsive to anti-depressant treatment; this after all is what the clinician wants to know.

For suicide and psychosis after TBI the first question to be asked, ‘What would have happened but for the injury’, is of particular interest. Do the personality characteristics and lifestyles of those who suffer TBI predispose them to suicide and psychosis? And, if so, what proportion of any elevated risk post-TBI do these premorbid factors explain? Bahraini et al., in their review of suicide and suicidal thoughts after TBI, find that one of the best studies on suicide to control for premorbid factors was in the military (Brenner, Ignacio, & Blow, Reference Brenner, Ignacio and Blow2011); suicide rates were about double in those who had suffered a TBI. Nevertheless, suicide is still a relatively rare event after TBI, making studies of interventions difficult. But hopelessness and suicidal thoughts are a common problem. So it is interesting to read about the randomised controlled trial of Simpson et al. (Reference Simpson, Tate, Whiting and Cotter2011) which finds that cognitive behaviour therapy may reduce hopelessness after TBI. The review of psychosis after TBI by Batty et al. acknowledges the complexity of the possible relationship between TBI and psychosis. For me, the real difficulty in identifying any relationship between TBI and any psychosis that follows, is that a conservative estimate is that the risk of psychosis after TBI is at best double the risk of psychosis in a control non-TBI population. If this is the case, it means that for every patient who develops a psychosis after TBI where the psychosis is due to the TBI, there is another patient who develops a psychosis after TBI where the psychosis would have been present anyway, even if the patient had not suffered a TBI; and one does not know which is which.

Lange et al. (Reference Lange, Brickell, French, Ivins, Bhagwat, Pancholi and Iverson2013) have found that the reporting of post-concussional symptoms after TBI in the military was strongly associated with possible symptom exaggeration, poor effort, depression and traumatic stress. Thus comorbid mental health problems seem to be playing a part. All the more reason to explore the treatment of comorbid mental health problems after TBI in the military. However, Matarazzo, Wortzel, Dorsey Holliman and Brenner find that despite all the interest in, particularly mild, TBI as a result of the wars in Iraq and Afghanistan, there is still relatively little evidence about what helps these injured personnel when they develop comorbid problems such as post-traumatic stress disorder, anxiety and depression. The authors acknowledge that in the meantime, while interventions specific to the military are being developed and evaluated, clinicians working with such military personnel need to turn to treatment recommendations and guidelines derived from the general population.

The Oliver Zangwill Centre in England was set up by Barbara Wilson and colleagues (Wilson, Gracey, Evans, & Bateman, Reference Wilson, Gracey, Evans and Bateman2009) to model the holistic approach to neurorehabilitation of Ben-Yishay and Prigatano that recognises that it ‘does not make sense to separate the cognitive, emotional and social consequences of brain injury’; how we feel and think affects how we behave. Dams-O'Connor and Gordon follow this lead and offer a model for a comprehensive neurorehabilitation intervention in which cognitive behavioural interventions for emotions are an integral part of the rehabilitation. I conclude that this, the management of mental health problems as an integral part of neurorehabilitation, is the most important part of the answer to the treatment of mental health problems after TBI; good neurorehabilitation is good for mental health.

Finally what about the carers? Sander et al. look at predictors of emotional distress in carers of those who have suffered a TBI. Not surprisingly, the presence of neurobehavioural problems in the patient is one of several predictors of caregiver distress. What is of particular interest here is the directionality of the relationship; does the behaviour of the patient affect the carer, or is it that the carer's mental health affects the patient? It is probably a bit of both, with the potential for vicious cycles resulting in deterioration. If it is the case that expressed emotion in the carer affects the mental state of the patient after TBI (Alway, McKay, Ponsford, & Schönberger, Reference Alway, McKay, Ponsford and Schönberger2012) then family/caregiver interventions may improve the mental health of the patient, as has been found for patients with schizophrenia. One comes full circle; mental health is critical for neurorehabilitation.

* Views captured on Cambridge Core between September 2016 - 4th March 2021. This data will be updated every 24 hours.

Mental Health is Central to Good Neurorehabilitation after TBI
×

Mental Health is Central to Good Neurorehabilitation after TBI
×

Mental Health is Central to Good Neurorehabilitation after TBI
×
×