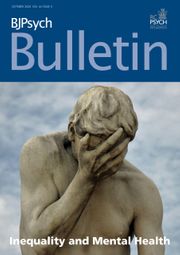 This specially commissioned issue features articles about diff erent aspects of inequality and mental health, like the article by D Padgett on homelessness and housing instability and mental health (pp. 197–201), and the article by Hao and Farah about research on neural mechanisms underlying emotional processing in individuals of diff ering socioeconomic status (pp. 202–207). An editorial on the importance of placing poverty-inequality at the centre of psychiatry by Byrne and James is included (pp. 187–190). We thank the authors for their interesting articles.