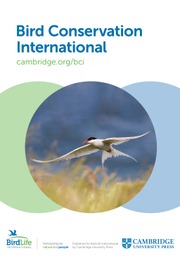 Olrog’s Gull Larus atlanticus breeds only in Argentina and is currently categorized as “Vulnerable”. Knowledge of the location of colonies and an updated understanding of human activities that may impact their breeding populations are crucial to the development of adequate conservation and management actions. In this paper we update the breeding distribution and abundance of Olrog’s Gull, using information from three aerial surveys (2004, 2007 and 2009) in its main breeding area, Buenos Aires Province, complemented by additional nest counts in southern Chubut Province, covering its entire breeding range. We also provide an updated and more detailed account of threats faced by Olrog’s Gulls at their nesting grounds, and summarise progress made towards their protection. The number of breeding sites was 7–12 per year, with locations differing among years. Five previously unrecorded breeding locations were identified. Colony size ranged from 5 to 3,540 breeding pairs, with the total breeding population 4,860–7,790 pairs, 98% of which nest in southern Buenos Aires Province. The main threats faced by breeding Olrog’s Gulls include coastal development, pollution, sport fishing and unregulated tourism and recreational activities. Recent strengthening of the protected area system in Argentina has resulted in all known breeding sites, with the exception of Isla Brightman, falling within protected areas. We need comprehensive, simultaneous surveys to track global population trends. Despite enhanced protection of Olrog’s Gull breeding populations, efforts are still needed to ensure that guidelines for their protection are included in management plans and that these are implemented effectively.

Habitat modification and disturbance are growing threats to many breeding and foraging bird populations, resulting in increased concern due to rapid growth of wildlife-based tourism, recreation, and resource extraction activities (Whittacker and Knight Reference Whittacker and Knight1998, Yorio et al. Reference Yorio, Rábano and Friedrich2001b). Several studies have reported effects of these activities on coastal bird foraging, nesting habitat use, breeding success, and population numbers (e.g. Erwin et al. Reference Erwin, Allen and Jenkins2003). Olrog’s Gull is highly dependent on intertidal habitats. It has a rather specialised feeding ecology during the breeding season, preying almost exclusively on crabs (Delhey et al. Reference Delhey, Carrete and Martínez2001b, Herrera et al. Reference Herrera, Punta and Yorio2005, Suárez et al. Reference Suárez, Retana and Yorio2011), which makes it vulnerable to changes in selective pressures and to environmental modifications resulting from human activities at its breeding grounds. In this context, knowledge of the location of colonies and an updated understanding of human activities in coastal areas that may impact Olrog’s Gull breeding populations are crucial to the development of adequate conservation strategies and management actions. In this paper we update the breeding distribution and abundance of Olrog’s Gull using information from three aerial surveys in southern Buenos Aires Province and additional nest counts at other breeding locations. We also summarise the threats faced by Olrog’s Gulls at their nesting grounds, and report progress made towards their protection.

Aerial surveys were conducted along the coast of southern Buenos Aires Province on 6 November 2004, 26–27 October 2007, and 9–10 November 2009, during the Olrog’s Gull late incubation stage. Survey dates varied among years due to inter annual differences in timing of breeding and weather-induced restrictions on flying. The surveyed area extended from Bahia Blanca (38º50’S) to Bahia San Blas (40º30’S) (Figure 1). Flight paths were chosen so as to include previously unsurveyed territory and locations where colonies had already been reported. A Cessna 182 was used, flying at an altitude of 100–200 m with observers on both sides of the plane. Known breeding sites and suitable habitat for nesting were located using a GPS and Landsat satellite images. Each colony was photographed using digital cameras (Canon 300D and 50D) with telephoto zoom lens (Canon 75–300 mm and 100–400 mm) and the number of breeding pairs was counted from the photos, except for Isla del Puerto where nest counts during visits by boat to the island were conducted. Olrog’s Gull nesting groups are easily recognised from aerial photos due to their tight nesting distribution (mean inter-nest distance of 0.66 m; García Borboroglu and Yorio Reference García Borboroglu and Yorio2007b) compared to Kelp Gulls Larus dominicanus (2.3 m). Nests of the two species are not intermingled, facilitating their discrimination in the aerial photos. Due to the high nest density, non-breeders rarely spend time within colony boundaries (unpubl. data). Nests were identified in the photographs based on nesting material, nest spacing and/or the presence of a sitting bird. A breeding pair was defined as any gull sitting on a nest or a pair standing at a nest. Coastal sectors in Golfo San Jorge, Chubut (44º55’, 60°32’W–45°13’S, 66°31’W), where Olrog’s Gulls were previously recorded breeding were visited by boat to locate colonies during the incubation or chick stages, and nest counts made. 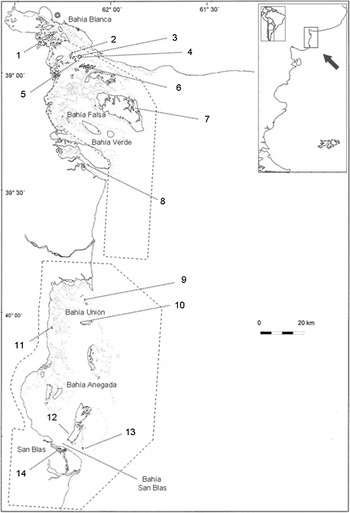 Figure 1. Location of Olrog’s Gull colonies recorded along the southern coast of Buenos Aires Province, Argentina, between 1990 and 2009. Numbers correspond to site numbers in Table 1. Dotted lines indicate the extension of protected areas (Bahía Blanca, Bahía Falsa and Bahía Verde to the north and Bahía San Blas to the south). The Isla del Puerto protected area is not shown due to the scale of the map.

Table 1. Location and size of Olrog’s Gull breeding colonies for the 2004, 2007 and 2009 breeding seasons. Lack of information indicates the location was not surveyed during that year. NC: nests not counted. Nest numbers at sites 1–14 were estimated from aerial photos and at sites 15–18 from ground counts. 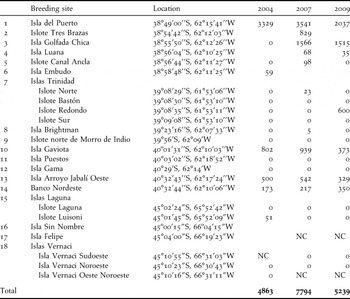 Isla del Puerto supported the largest colony throughout the species’s breeding range, holding 39–68% of breeding pairs during the three study years. Numbers at this site declined by roughly 40% in 2009 relative to 2004 and 2007, but increased again in 2011 (P. Petracci unpubl. data.). Two new sites were discovered in the Zuraitas Archipelago: Islote Tres Brazas and Isla Luana (Figure 1). Isla Golfada Chica, located in the same archipelago, was inactive in 2004 but held a relatively large number of breeding pairs in 2007 and 2009 (Table 1). This colony also was active in 2006, when 311 nests and 640 fledglings were counted during a visit in late December (Petracci et al. Reference Petracci, Sotelo and Díaz2008). The third newly discovered breeding site in this area was located on the northern shores on Isla Embudo, 4 km south of the site designated as Islote Canal Ancla in 2001 (Rábano et al. Reference Rábano, García Borboroglu and Yorio2002) (Figure 1). Breeding gulls were only observed at this site in 2004 and in relatively small numbers (59 nests). The nearby Islote Canal Ancla breeding site did not show signs of nesting activity in 2004, suggesting that gulls may have moved between these sites. 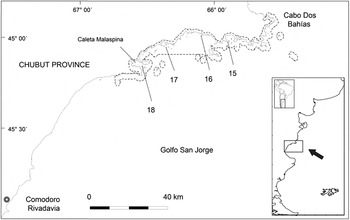 Conservation actions: recent improvements in the protection of breeding populations

During the last decade, progress has been made in relation to the formal protection of Olrog’s Gull breeding grounds. The recent strengthening of the coastal and marine protected area system in Argentina has improved the protection status of gull breeding sites and foraging areas by creating or expanding four new protected areas: the Bahía Blanca, Bahía Falsa and Bahía Verde Multiple Use Nature Reserve, the Bahía San Blas Multiple Use Nature Reserve, the Isla del Puerto Reserve, and the Patagonia Austral Coastal Marine Park (Figures 1 and 2).

As a result of the extension of the areas under protection and the creation of new ones, all known breeding sites with the exception of Isla Brightman are now within protected areas. Given the relatively small foraging range of breeding Olrog’s Gulls (Yorio et al. Reference Yorio, Quintana, Gatto, Lisniser and Suárez2004, Suárez et al. Reference Suárez, Retana and Yorio2012), these protected areas not only protect the gull’s nesting sites but probably also their main feeding areas. Recently, management plan proposals have been developed and approved for the Bahía Blanca, Bahía Falsa and Bahía Verde Multiple Use Nature Reserve (Sotelo and Massola Reference Sotelo and Massola2008; Organismo Provincial para el Desarrollo Sostenible, Nº 2145-0017312/2008) and Bahía San Blas Multiple Use Nature Reserve (Zalba et al. Reference Zalba, Nebbia and Fiori2008; Organismo Provincial para el Desarrollo Sostenible, Nº 2145-0021084/2008). However, protection for Olrog’s Gulls is still insufficient as two of the protected areas still do not have management plans and the ones developed for the other two areas lack formal implementation. And although existing management plans explicitly restrict access to colonies and make egg harvesting illegal, no specific conservation actions have yet been taken to address these threats. Coastal waters encompassing all of the protected areas where Olrog’s Gulls breed have been also designated as Special Protection Zones, where specific regulations exist regarding the disposal of potential pollutants (Prefectura Naval Argentina 1998).

To date, Olrog’s Gulls have been recorded nesting at 18 locations, although there may be less than a dozen active colonies in any given year. Our results confirm a relatively small global breeding population of less than 8,000 pairs, with more than 98% breeding in southern Buenos Aires Province. Five sites are crucial for the species: Isla del Puerto, Islas Zuraitas, Islas Trinidad, north of Bahía Anegada and Bahía San Blas. Changes in breeding sites among seasons indicate the need to develop comprehensive and simultaneous surveys throughout its breeding range to track global population trends. The apparent increase in population estimates stems more from recently discovered breeding sites than a population increase. The main threats to Olrog’s Gulls are marine pollution and human disturbance of foraging areas. Increased awareness and improved spatial protection may suggest that breeding populations are receiving adequate attention, but efforts are needed to ensure that guidelines for their protection are included in protected area management plans and that these are implemented effectively. Future studies should develop recommendations to minimize conflicts between this threatened gull species and human populations by gathering information on temporal and spatial patterns of human activities in key gull foraging areas.

We thank Wildlife Conservation Society and Agencia Nacional de Promoción Científica y Tecnologica/PICT 33611 for financial support, Centro Nacional Patagónico (CONICET) for institutional support, and Soriano S.A. for logistical support. We thank Martín Sotelo, Marcos Magnanelli, Martín Carrizo and Valdemar Delhey for their help during aerial surveys, Nicolás Suárez and Laura Agüero for providing unpublished information, and Marcelo Davel (MD Helicópteros) for logistic support. We also thank the Buenos Aires and Chubut provincial authorities for the permits to work at protected areas, the Base Aeronaval Comandante Espora authorities for the permits to fly over restricted areas, and several volunteers for their help during field work.