Developments in the Theory and Practice of Cognitive and Behavioural Therapies 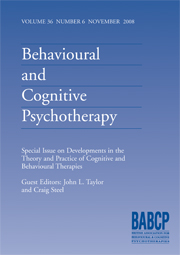