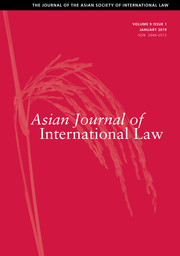 Symposium on Onuma Yasuaki’s “International Law in a Transcivilizational World”