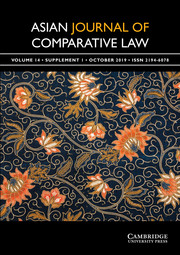 Part I: The State of Comparative Law in Asia

Part II: The Teaching of Comparative Law in Asia