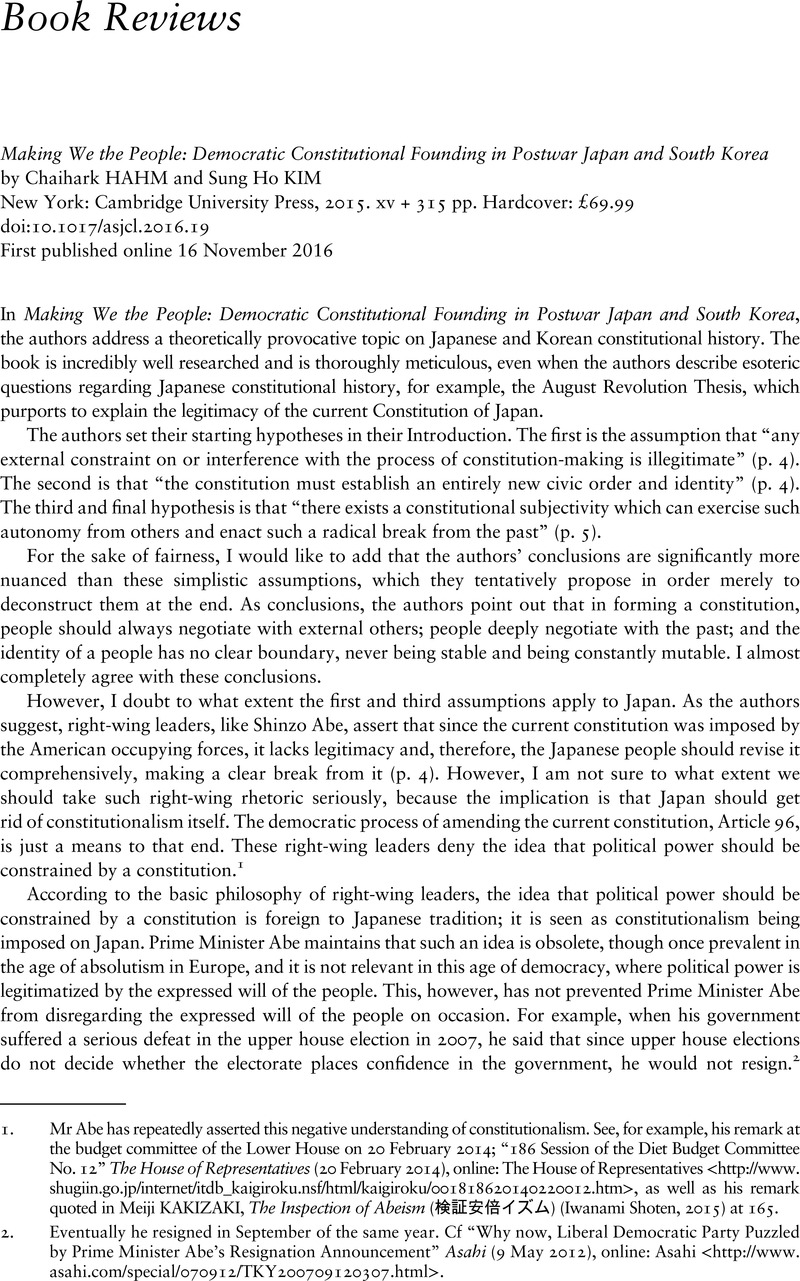 1. Mr Abe has repeatedly asserted this negative understanding of constitutionalism. See, for example, his remark at the budget committee of the Lower House on 20 February 2014; “186 Session of the Diet Budget Committee No. 12” The House of Representatives (20 February 2014), online: The House of Representatives <http://www.shugiin.go.jp/internet/itdb_kaigiroku.nsf/html/kaigiroku/001818620140220012.htm>, as well as his remark quoted in KAKIZAKI, Meiji, The Inspection of Abeism (検証安倍イズム) (Iwanami Shoten, 2015) at 165 .

8. It should be noted that Korsgaard calls her model of self-constitution the “constitutional model”, according to which a person’s self should be regarded as being above other aspects of a person, such as passion and reason ( KORSGAARD, Christine, Self-Constitution: Agency, Identity, and Integrity (New York: Oxford University Press, 2009), Chapter 7). The self should be compared to the constitution of a city-state as described in Plato’s Republic. The person is not identified with his reason alone. He identifies with his constitution, and his constitution says that reason should rule. In her argument, the city is supposed to be already constructed as an “agent that performs actions and so has a life and a history” (Ibid at 141). The city as such, deprived of its constitution and not unified by it, cannot act (Ibid at 152). Therefore, while in a possible sense there is no state prior to the people’s choices and actions because it is in a continuing process of self-constitution, this process itself presupposes an existence of a constitution of the state.

11. Treaty of Peace with Japan, 8 September 1951, 136 UNTS 46 (entered into force 28 April 1952), which ended the Second World War, did not mention the changes of nationality of former colonial subjects.

13. See ISRAEL, Jonathan, ed, The Anglo-Dutch Moment: Essays on the Glorious Revolution and its World Impact (Cambridge: Cambridge University Press, 1991). I do not deny that Protestant people in Britain welcomed the Dutch invasion. Similarly, the Japanese people enthusiastically welcomed the enactment of the Constitution of Japan in 1946.

15. HARDIN, Russell, Liberalism, Constitutionalism, and Democracy (Oxford: Oxford University Press, 1999) at 85-90 . Hardin says, “If a constitution is to be stable, it must be self-enforcing. It must be a co-ordination, because the nation cannot go to a supranational agency to enforce its citizens’ contractual agreement with each other or with their government” (Ibid at 98).

16. RAZ, Joseph, “On the Authority and Interpretation of Constitutions: Some Preliminaries” in Larry ALEXANDER, ed, Constitutionalism: Philosophical Foundations (Cambridge: Cambridge University Press, 1998) 152 at 173 .

17. As the authors mention (pp. 66-67), even Jean-Jacques Rousseau, a champion of democracy, discusses the image of a législateur, who makes the people accept a constitution with recourse to religious enchantment. See ROUSSEAU, Jean-Jacques, The Social Contract and later political writings, ed and translated by Victor GOUREVITCH (Cambridge: Cambridge University Press, 1997), Book II, Chapter VII at 68-72 .

18. See Hasebe, “On the Dispensability”, supra note 7 at 48-9. Perhaps, we can state the same point in a Korsgaardian way. If there is a working constitution, then we can say that there is a people acting as an agent, because only after being equipped with a constitution, the people can perform actions and has a life and a history. Such a people will self-constitute itself in choosing what it should and will be. And the people are bound because they have a constitution; not because it binds itself, which is a contradiction.

19. See HASEBE, Yasuo, “Why We Should Not Take Sovereignty Too Seriously” in Antero JYRÄNKI, ed, National Constitutions in the Era of Integration (The Hague, London, Boston: Kluwer International, 1999) at 113 .