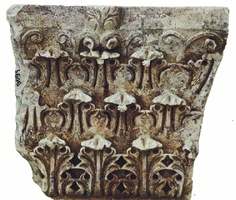 The Greek inhabitants of medieval Anatolia showed a lamentable lack of interest in gleaming white marble columns. As a result, the late first millennium AD—and particularly the crucial period between the seventh and ninth centuries for which written sources are almost entirely lacking—has long been a major blind spot in the history and archaeology of Turkey. Twentieth-century excavators tended to neglect post-Roman structures in favour of the more tourist-friendly cityscapes of the Hellenistic and Roman imperial periods. The last three decades have seen a welcome shift in European and American fieldwork priorities towards the medieval period, and the character and chronology of the transition from Roman Late Antiquity to the Byzantine Middle Ages in Anatolia is now for the first time starting to come into focus.

The archaeology of Byzantine Anatolia shows quite how dramatically our understanding of the Early and Middle Byzantine period in Turkey (fifth to eleventh centuries AD) has been transformed in recent years. The volume is edited by the German architectural historian Philipp Niewöhner, director of the Miletos excavations from 2012–2016, and one of the leading lights of the post-Roman ‘turn’ in Anatolian archaeology. Many of the most important Byzantine sites in Turkey have been excavated or surveyed by German and Austrian teams (Ephesos, Miletos, Aizanoi, Germia), and one of the key contributions of this volume is to make their work available in English for the first time.

The first half of the volume consists of 14 synthetic essays on Byzantine archaeology in Anatolia. As one would expect, architectural history predominates; art history is notable by its absence. The most intellectually exciting essays are the outstanding short chapter on ‘Rural settlements’ by Adam Izdebski, Fatma Gül Öztürk's suggestive essay on ‘Rock-cut architecture’ (a topic crying out for a serious post-processual study), and a fine multi-disciplinary essay by Eric Ivison on ‘Funerary archaeology’. Rather less illuminating are those essays that maintain a narrowly typological approach (Niewöhner on ‘Monasteries’, Hans Buchwald and Matthew Savage on ‘Churches’).

The second half of the volume contains 24 short ‘Case studies’ (3–14 pages apiece) of significant Byzantine Anatolian sites, with a focus on urban settlements. There are valuable overviews of recent work at the major west-Anatolian cities (Pergamon, Ephesos, Miletos, Aphrodisias), but I suspect that most readers will particularly appreciate the detailed coverage of Byzantine sites in inner Anatolia (Germia, Boğazköy, Çadır Höyük, Euchaita), a crucial settlement zone where serious fieldwork is still in its infancy. The most unfortunate absences are Hierapolis (Pamukkale) in Phrygia, whose Late Antique and Byzantine phases have been particularly well studied in recent years, and the site and territory of Kyaneai in Lycia, object of an innovative long-term field survey project between 1989 and 2001.

This volume gives an excellent sense of current trends of thought in Late Roman and Early Byzantine archaeology. The fifth and sixth centuries AD are confirmed as a period of dramatic settlement growth and economic intensification throughout the Anatolian countryside (Izdebski, pp. 87–89). This has generally been interpreted as a process of ‘ruralization’, going hand in hand with ‘urban decline’ (Niewöhner, p. 2). The excavators of many sites now argue, however, for continued urban vitality well into the sixth century (Ephesos, Aphrodisias, Sagalassos). The degeneration of the cities’ old Roman monumental infrastructure (Niewöhner, pp. 43–46) may not have reflected population flight so much as a change in the function and use of urban public spaces.

Perhaps the most important novelty is the radically modified picture of the seventh century AD. A generation ago, thanks to the pioneering work of Clive Foss, it seemed firmly established that the ancient city in Asia Minor had been finally killed off by the Persian invasions of Anatolia (between 611 and 627 AD) and subsequent Arab incursions of the seventh and early eighth centuries. It remains true that the seventh century saw large-scale abandonment of old urban centres. The alleged archaeological evidence for a Perso-Arab ‘assassination’ of the Graeco-Roman urban tradition was, however, always ambiguous at best, and not one of the excavators of major urban centres of Western Asia Minor (Ephesos, Sardis, Aphrodisias, Sagalassos) is now prepared to state unequivocally that seventh-century damage was caused by Persian or Arab violence. Indeed, several of the relevant destruction horizons (many of them now attributed to earthquake damage) seem to have been significantly misdated through excessive reliance on dated coin-finds. For example, the excavator of Ephesos now wishes (on the basis of ceramic finds) to push several presumed early seventh-century ‘Persian’ destruction layers forward into the “later seventh century or even thereafter” (p. 245).

Likewise, there is a growing realisation that the large-scale disappearance of coinage from west Anatolian sites in the mid seventh century may reflect not depopulation but changes in economic behaviour (fewer people using coins, not fewer people, p. 76). At Sagalassos, the excavators now believe that both urban and rural sites continued to be occupied in substantial numbers through the eighth and ninth centuries. As the period was characterised by local ceramic production and minimal coinage use, it was just hard to spot archaeologically (p. 307). In the context of this growing tendency to downplay the impact of the seventh- and eighth-century Persian and Arab incursions in western Anatolia, the editor's decision (p. 6) to rename the Byzantine ‘Dark Ages’ (seventh to ninth centuries AD) as the ‘Invasion Period’—a terminology adopted by several contributors—seems at best counterintuitive.

Sadly, The archaeology of Byzantine Anatolia may well mark the end of an era. Over the past few years, the political climate in Turkey has become increasingly hostile to European archaeologists, and many of the innovative fieldwork projects summarised in this volume have been shut down by Turkish authorities on the flimsiest of pretexts. The priorities of the Turkish Ministry of Culture and Tourism are explicitly driven by the aesthetic preferences of revenue-bearing foreign tourists, and gleaming white marble columns are back at the top of the agenda. Let us hope that Turkish archaeological teams can find the resources and expertise to pursue further the various exciting post-Roman agendas laid out in this exemplary and highly readable volume.