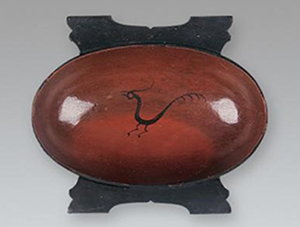 Reconstructing the history of elite communication in ancient China benefits from additional archaeological evidence. We combine textual analysis with new human stable carbon and nitrogen isotope data from two Chu burials in the Jingzhou area to reveal significant dietary differences among Chu nobles of the middle Warring States period (c. 350 BC). This research provides important new information on the close interaction between the aristocratic families of the Qin and Chu.

The two centuries preceding the Qin unification of the six states and the establishment of the first empire in Chinese history is commonly known as the Warring States Period (475–221 BC). Scholars argue that frequent and large-scale warfare during this period was associated with the migration and reorganisation of different populations across North and South China (e.g. Loewe & Shaughnessy Reference Loewe and Shaughnessy1999). As a powerful and open state from the Spring and Autumn (770–476 BC) through Warring States periods, Chu attracted numerous talents from the north, including famous military strategists Wu Qi (吴起), Baili Xi (百里奚), Lian Po (廉颇) and Tian Ji (田忌), and renowned philosophers, such as Confucius (孔子) and Lao Zi (老子), who all purportedly sojourned in Chu (Sima Reference Sima2013). Furthermore, given the unstable contemporaneous political conditions, we envisage that other complex interactions between Chu and outside states would have taken place, which may be revealed through archaeological rather than textual enquiry.

Since c. 1950, archaeologists have excavated more than 6000 Chu burials around the Jingzhou region—the location of the Warring States Chu capital at Ying (郢). Our project, Reconstructing the Deep History of Ancient Chu (RDHAC), combines recent archaeological evidence from these Chu burials with the multidisciplinary methods of archaeological science, including analyses of ancient DNA and proteins, carbon, nitrogen and strontium isotopes, and human skeletal remains, and 3D facial reconstruction technology. Our aim is to understand the formation and population history of Chu people and to reconstruct their physical, genetic and cultural dynamics. These would include a detailed history of aristocratic communication among the Chu and surrounding states. This article reports the results from our preliminary investigation of human remains recovered from two Chu tombs in Jingzhou, located along the middle Yangtze River Basin (Figure 1).

This large tomb of a Chu noble covered an area of approximately 1088m2 and was excavated from 2013–2015 (Figure 2a–b). More than 866 artefacts, including bronze objects, lacquered wooden wares, jades, bone and antler tools, bamboo slips and plant macrofossils of various spices and fruits, were found entombed with the male inhumation (Figures 2c & 3). The tomb's size, grave goods and written contents of the bamboo slips suggest that the owner of Tomb No. 1 held the position of Zhongjiu Yin (中厩尹: Director of the Stable of the Queen's Horses), and rank of Dafu (大夫: Grand Master) in the state of Chu, and that he lived during the middle Warring States (Jia et al. Reference Jia2017).

Figure 2. a–b) Photograph and illustration of Wangshanqiao Tomb No. 1; c) skeleton excavated from Tomb No. 1 (scale in cm) (figure by H. Jia and J. Xiong).

Our direct AMS radiocarbon dating of a tooth from the tomb's occupant yielded a date of 2310±30 BP (Beta-581366, 410–350 BC; calibrated in OxCal v4.4 using the IntCal20 calibration curve (Bronk Ramsey Reference Bronk Ramsey2009; Reimer et al. Reference Reimer2020)). This new date indicates that the occupant of Tomb No. 1 lived during the reign of King Xuan (楚宣王: 369–340 BC) of Chu, who, according to the Shi Ji (史记; Records of the Grand Historian), married a woman from Qin in c. 357 BC (Sima Reference Sima2013) (君尹黑迎女秦, King Xuan of Chu married a woman from Qin and sent an aristocrat with a position of YouYin to pick her up). This political marriage was the first historically attested marital exchange between the Qin and Chu nobles during the Warring States (Zhang Reference Zhang2007). We deduce, following multiple lines of archaeological evidence, including radiocarbon dating, textual materials and buried Qijia Culture-style jades (Figure 3b), that the primary occupation of the owner of Wangshanqiao Tomb No. 1 was likely closely related to the new queen's daily life. In this case, we suspect that this individual may have relocated with the aforementioned Qin woman, moving from the north-west China loess to the Jingzhou area of central Hubei.

Stable carbon (δ13C) and nitrogen (δ15N) isotope analysis of human dentine can reveal early-life dietary practices and can potentially address this question of geographical origin. To test whether the owner of Wangshanqiao Tomb No. 1 came from Qin in northern China, we analysed δ13C and δ15N values for the individual (δ13C = −8.1‰; δ15N = 11.3‰). In order to compare the owner of Tomb No. 1 with other contemporaneous Chu nobles, we acquired an additional radiocarbon date (2270±30 BP; Beta-595664, 400–345BC) and stable carbon and nitrogen isotopic data in a dentine sample (δ13C = −17.8‰; δ15N = 13.1‰) from a male found at Huangjiatai Tomb No. 18 in Qianjiang. Located just east of Jingzhou city, on the shore of Changhu Lake, this tomb covers an area of 54m2 (Figure 4). The size of Tomb No. 18 and nature of its grave goods suggest that the occupant was of Shi (士, lower-class noble) rank. To further contextualise these new isotope data for the two Chu nobles, we also pooled existing isotopic results for human collagen (n = 955) from 40 sites in north-central and southern China. The results are summarised and plotted in Figure 5.

Figure 5. Distribution of states in the middle Warring States Period (c. 350 BC) and location of all sites with isotope data in this study (elevation in metres asl) (map by P. Sheng and Y. Liu).

Our most intriguing discovery was the clear difference in dietary patterns between the two Chu nobles. Specifically, δ13C values from Tomb No. 1 and Tomb No. 18 indicate the primary influence of C4- and C3-based proteins in their respective diets. Furthermore, as opposed to Tomb No. 1, δ15N values from the occupant of Tomb No. 18 reveal a far wider range of consumption of 15N-rich aquatic resources—a major part of a subsistence strategy that we would expect along the middle Yangtze River (Sima Reference Sima2013). Previous archaeobotanical and isotopic investigations have revealed the huge differences in agricultural production between north (C4 crops: millet-based agriculture) and south (C3 crops: rice-based agriculture) China prior to 2000 BP (Lv Reference Lv2017). Our initial results suggest that the lower-class Chu noble from Tomb No. 18 probably ate rice and fish, echoing the textual record of “eating paddy-rice and fish” (饭稻羹鱼) in Shi Ji (Sima Reference Sima2013). Meanwhile, the high-class Chu noble from Tomb No. 1 dined on a significant volume of millet-based foods and terrestrial animals in early life (similar to other north-central China populations), indicating that the male in Tomb No. 1 probably grew up in the millet-farming regions of northern China (see Figure 6).

Figure 6. Mean ±SD human δ13C (a) and δ15N (b) results of Huangjiatai Tomb No. 18, Wangshanqiao Tomb No. 1 and 40 other sites in the northern, central and southern parts of China. For detailed data and references, see the online supplementary material (OSM). Note: δ13C measurements < −18‰ reflect a predominately C3 diet (rice-based); values > −12‰ reflect a predominately C4 diet (millet-based); values between −12‰ and −18‰ indicate a mixed C3/C4 diet (figure by Y. Xu).

Pending further textual evidence, we tentatively argue that after marrying a Qin woman, the owner of Wangshanqiao Tomb No. 1 may have travelled to the Jinghan Plains in Chu State, where he lived for a considerable period, and was buried in the manner of upper-class Chu nobles. Our future interdisciplinary work will continue to test our hypothesis and further illuminate the lives of Chu peoples.

Thanks to Edward Allen (Fudan University) for reviewing the English manuscript.

Figure 2. a–b) Photograph and illustration of Wangshanqiao Tomb No. 1; c) skeleton excavated from Tomb No. 1 (scale in cm) (figure by H. Jia and J. Xiong).

Figure 5. Distribution of states in the middle Warring States Period (c. 350 BC) and location of all sites with isotope data in this study (elevation in metres asl) (map by P. Sheng and Y. Liu).

Figure 6. Mean ±SD human δ13C (a) and δ15N (b) results of Huangjiatai Tomb No. 18, Wangshanqiao Tomb No. 1 and 40 other sites in the northern, central and southern parts of China. For detailed data and references, see the online supplementary material (OSM). Note: δ13C measurements < −18‰ reflect a predominately C3 diet (rice-based); values > −12‰ reflect a predominately C4 diet (millet-based); values between −12‰ and −18‰ indicate a mixed C3/C4 diet (figure by Y. Xu).