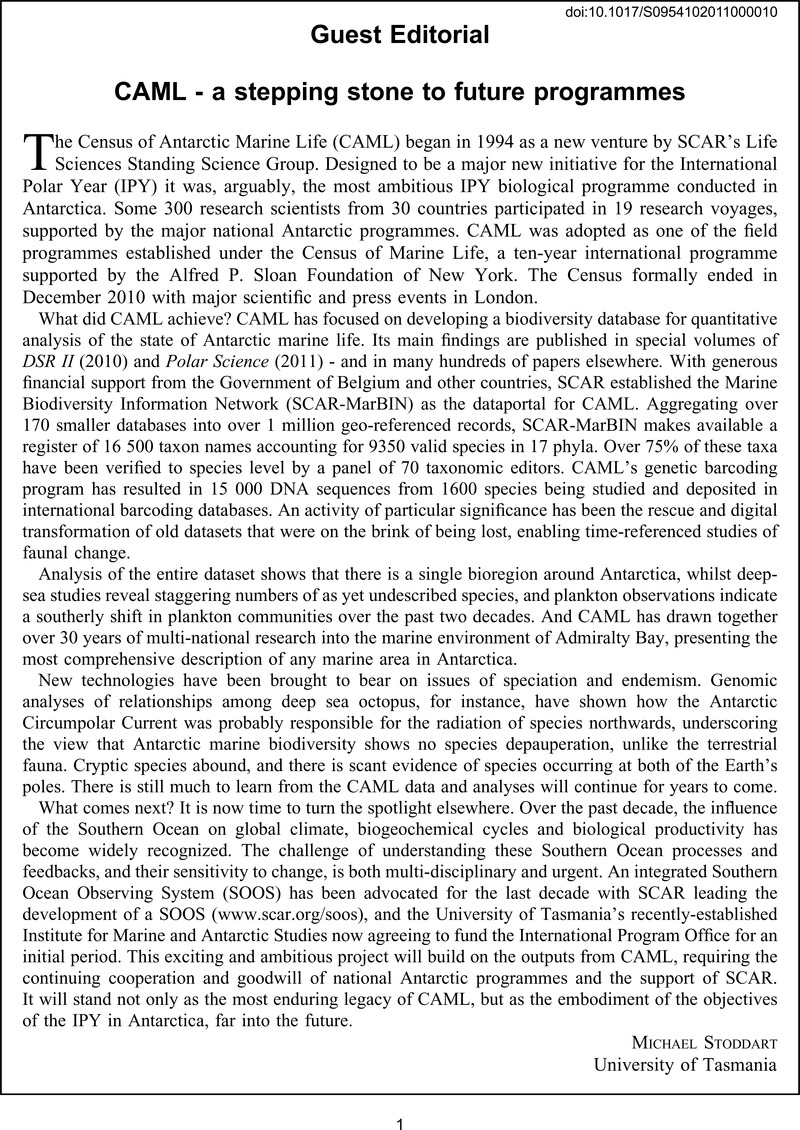 An abstract is not available for this content so a preview has been provided. To view the full text please use the links above to select your preferred format.
Type
Guest Editorial
Information
Antarctic Science , Volume 23 , Issue 1 , February 2011 , pp. 1
DOI: https://doi.org/10.1017/S0954102011000010[Opens in a new window]
Copyright
Copyright © Antarctic Science Ltd 2011

The Census of Antarctic Marine Life (CAML) began in 1994 as a new venture by SCAR's Life Sciences Standing Science Group. Designed to be a major new initiative for the International Polar Year (IPY) it was, arguably, the most ambitious IPY biological programme conducted in Antarctica. Some 300 research scientists from 30 countries participated in 19 research voyages, supported by the major national Antarctic programmes. CAML was adopted as one of the field programmes established under the Census of Marine Life, a ten-year international programme supported by the Alfred P. Sloan Foundation of New York. The Census formally ended in December 2010 with major scientific and press events in London.

What did CAML achieve? CAML has focused on developing a biodiversity database for quantitative analysis of the state of Antarctic marine life. Its main findings are published in special volumes of DSR II (2010) and Polar Science (2011) - and in many hundreds of papers elsewhere. With generous financial support from the Government of Belgium and other countries, SCAR established the Marine Biodiversity Information Network (SCAR-MarBIN) as the dataportal for CAML. Aggregating over 170 smaller databases into over 1 million geo-referenced records, SCAR-MarBIN makes available a register of 16 500 taxon names accounting for 9350 valid species in 17 phyla. Over 75% of these taxa have been verified to species level by a panel of 70 taxonomic editors. CAML's genetic barcoding program has resulted in 15 000 DNA sequences from 1600 species being studied and deposited in international barcoding databases. An activity of particular significance has been the rescue and digital transformation of old datasets that were on the brink of being lost, enabling time-referenced studies of faunal change.

Analysis of the entire dataset shows that there is a single bioregion around Antarctica, whilst deep-sea studies reveal staggering numbers of as yet undescribed species, and plankton observations indicate a southerly shift in plankton communities over the past two decades. And CAML has drawn together over 30 years of multi-national research into the marine environment of Admiralty Bay, presenting the most comprehensive description of any marine area in Antarctica.

New technologies have been brought to bear on issues of speciation and endemism. Genomic analyses of relationships among deep sea octopus, for instance, have shown how the Antarctic Circumpolar Current was probably responsible for the radiation of species northwards, underscoring the view that Antarctic marine biodiversity shows no species depauperation, unlike the terrestrial fauna. Cryptic species abound, and there is scant evidence of species occurring at both of the Earth's poles. There is still much to learn from the CAML data and analyses will continue for years to come.

What comes next? It is now time to turn the spotlight elsewhere. Over the past decade, the influence of the Southern Ocean on global climate, biogeochemical cycles and biological productivity has become widely recognized. The challenge of understanding these Southern Ocean processes and feedbacks, and their sensitivity to change, is both multi-disciplinary and urgent. An integrated Southern Ocean Observing System (SOOS) has been advocated for the last decade with SCAR leading the development of a SOOS (www.scar.org/soos), and the University of Tasmania's recently-established Institute for Marine and Antarctic Studies now agreeing to fund the International Program Office for an initial period. This exciting and ambitious project will build on the outputs from CAML, requiring the continuing cooperation and goodwill of national Antarctic programmes and the support of SCAR. It will stand not only as the most enduring legacy of CAML, but as the embodiment of the objectives of the IPY in Antarctica, far into the future.

* Views captured on Cambridge Core between September 2016 - 6th March 2021. This data will be updated every 24 hours.